Film Review: The Man Who Would Be King 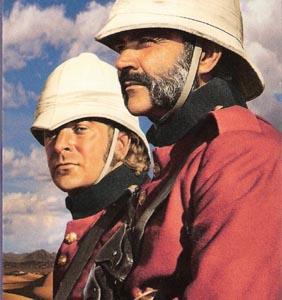 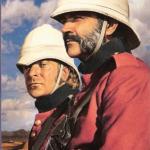 "He wants to know if you are gods?" "Not gods - Englishmen. The next best thing."

Free will and kismet go hand in hand in John Huston's epic adventure The Man Who Would Be King, a tale based on the Rudyard Kipling classic of the same name. A novella that barely fills fifty pages, more than fills the cinema screen with the larger-than-life tale of two British Colonial ex-pats who strike off on their own to become kings of Kafiristan.

It seems that the life that awaits them back home in England doesn't quite measure up to the adventures they've experienced in Colonial India. "Home to what? A porter's uniform outside a restaurant and six penny tips from belching civilians for closing cab doors on their blowzy women? Not for us thank you. Not after watching Afghans come howling down out of the hills and taking battlefield command when all the officers copped it."

The story commences with Rudyard Kipling (Christopher Plummer) in a pullman car with Peachy Carnehan (Michael Caine) on a train bound for Marbar Junction, just moments after Peachy has filched Kipling's pocket watch, only to discover that he's a fellow member of the secret brotherhood of the Freemasons. Peachy seizes the opportunity to both assuage his guilt by returning Brother Kipling's watch, and to hornswagle him into relaying a message to Daniel Dravot (Sean Connery), his partner in crime. "Suppose I was to ask you as a stranger going to the West to seek for that which was lost, what would you say then?" To which Kipling replies, "I should answer where do you come from?" "From the East and I am hoping that you will give my message on the square for the sake of a widow's son. Tell him, Peachy's gone south for the week."

The story continues when Daniel Dravot and Peachy Carnehan turn up after hours in the editorial offices of the Northern Star, where they ask Kipling to witness their 'contrack' to avoid strong drink and intercourse with women until their pledge to become kings of the mythical kingdom of Kafiristan have been realized. And off they go the following morning, disguised as beggars, toting 20 concealed rifles and plenty of ammo, extorted from the District Commissioner. As a parting gift, Rudyard Kipling gives Daniel a Freemason's amulet to wear around his neck, a seemingly small and innocent gesture that will have a more profound impact on destiny than they could ever imagine.

Throughout their arduous trek, Peachy and Daniel brave the perils of avalanches and Afghan marauders, over the lofty Himalayan peaks and down into the tribal valley of Kafiristan. According to Daniel Dravot's master plan, they will conquer and assimilate. "In any place where they fight," he says, "a man who knows how to drill men can always be a King. We shall go to those parts and say to any King we find - "D'you want to vanquish your foes?' and we will show him how to drill men; for that we know better than anything else. Then we will subvert that King and seize his Throne and establish a Dynasty." And in a later scene, he explains to one rag-tag band of would-be soldiers, "Now listen to me you benighted muckers. We're going to teach you soldiering. The world's noblest profession. When we're done with you, you'll be able to slaughter your enemies like civilized men."

In no time at all, their best-laid plans have been fulfilled and Peachy and Daniel do indeed become kings of Kafiristan, with Daniel assuming the superior role, since he was shot with an arrow on the battlefield and suffered no harm, thus elevating him to a god-like status among his conquests. With Peachy at his side, he rules with judicious authority, handing down edicts that are both wise and fair. His reputation spreads far and wide, and it' isn't long before he attracts the attention of the powers that be in the Holy City, who demand that he present himself, unarmed, before them. Once inside the fortress, where the holy men await the coming of Segundar, the son of Alexander the Great, Daniel Dravot suddenly realizes that he has charged headlong into his destiny as both god and conquerer. That is until the local mythology, which elevated him to such a lofty status, is also the essence of his undoing.

For anyone with basic knowledge of Alexander the Great, the historical threads and themes will be obvious. And for those with knowledge of classic literature, Daniel Dravot will represent the archetypal hero with feet of clay. Casting, cinematography, wardrobe and music are all outstanding, and the script is as quotable as any Shakespeare play. And although Sean Connery made his fame as OO7, and Michael Caine will always be remembered for his Oscar-winning role as Alfie, their performances in The Man Who Would Be King are by far, their finest.

The Man Who Would Be King is available on VHS and DVD at Amazon.com