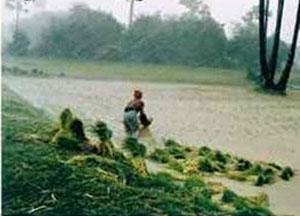 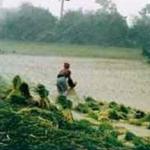 Rice. The staff of life for nearly all of Asia. Pristeen in its snowy simplicity, yet so complex in its cultivation.

And for Yong Poeuv and his family, complex doesn't even begin to define the concept of rice. Yong Poeuv and his wife Yim Om live in Cambodia with their seven daughters, Sakha, Sokhoeun, Sokhon, Sophon, Sophoeun, Sophat, and Soheap, in a spacious bamboo home that overlooks a vast expanse of rice paddies that they cultivate alongside their fellow villagers.

Yong Poeuv owns fourteen plots of land, a mere fraction of what his ancestors once owned, until they were forced to sell off the majority of their estate during bad harvest years. Poeuv worries that he will have only two plots to give each of his daughters, while his optimistic wife, Om has dreams that two of them will go to school in the city, and the eldest already has a worthy suitor.

Using a rustic, handmade plow and a pair of oxen, Poeuv and Om work hard all day, every day of the year in their rice paddies, and at night, they make offerings to the gods and ancestors and pray for a successful and abundant harvest. They seem to be getting by well enough, until one day, Poeuv is wounded in the rice paddies by a poisonous thorn that becomes embedded in his heel. Strange how something so small and insignificant can determine the fate of an entire family.

Directed by Rithy Panh, Rice People is a study in interdependence and the perpetual struggle of man against nature in his attempt to eke out a living from the land. Fishing in the river with a bamboo trap, gathering lotus roots from the bow of a tiny boat, tending the rice paddies from dawn til long after dusk, battling infestations of insects, crabs, rats, and birds.

And in the end, if there's anything left, comes the harvest. The gathering, the threshing, the winnowing and the storage. For all their hard work, Yong Poeuv's fourteen plots yielded only eleven sacks of rice.

Rice People is a visually beautiful and meaningful film that uses lyrical music, lush sound effects and human drama to invite the viewer to enter and become a part of their day-to-day world. Once you've seen Rice People, a simple bowl of rice will never again be just a bowl of rice.

Rice People is available on DVD at Amazon.com