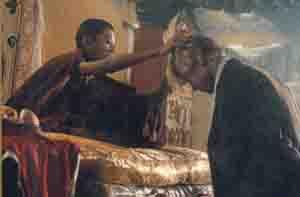 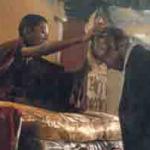 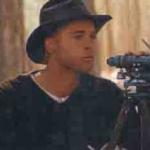 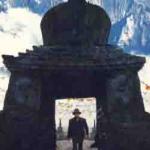 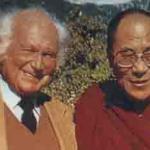 Based on a true story, the 1997 Jean-Jacques Annaud film stars Brad Pitt as Heinrich Harrer, an Austrian mountain climber who, during an attempt to scale the Himalayan peak Nanga Parabat, is interned in a World War II POW camp by the British in Colonial India. After numerous attempts, he escapes with several other men and flees to Tibet, where he enters the forbidden city of Lhasa, and eventually meets the young Dalai Lama. The boy takes an instant liking to Harrer, who serves for seven years as his teacher, cultural mentor and confidant. The two become lifelong friends, and when Heinrich Harrer finally returned to Europe after war ended, he wrote a riveting account of his adventures, also titled Seven Years in Tibet. And once he left Tibet, Harrer went on to climb many lofty peaks in countries all over the globe, and later starred as himself in the 1956 version of Seven Years in Tibet, directed by Hans Nieter.

With the splendor of the Himalayas as the cinematic landscape and the sacred legacy of the Fourteenth Dalai Lama as the premise, Seven Years in Tibet is naturally a film of epic proportions. And despite any misgivings one might have about such a film starring a Hollywood superstar like Brad Pitt, his performance is remarkably unaffected and understated, and the story holds true to Heinrich Harrer's book, inasmuch as any film of its kind is able to do so. Most of its omissions are in the minutia: Harrer's internal observations of his experiences and the endless details of each outpost along his arduous trek through the Himalayas.

Performances by an excellent supporting cast create convincing portraits of three-dimensional characters, including David Thewlis as Harrer's rival and sometimes traveling companion Peter Aufschnaiter, B.D. Wong as Ngawang Jigme, Mako as Kungo Tsarong, Ingeborga Dapkunaite as his wife Ingrid Harrer, Lhakpa Tsamchoe as the lovely and exotic seamstress Pema Lhaki and Jetsun Pema, the real life sister of the Dalai Lama who plays their mother in the film.

But the real star of the show is Jamyang Jamtsho Wangchuk, an impish young man who plays the Dalai Lama at 14 years old. His effervescent portrayal of Tenzin Gyatso in his insatiable thirst for knowledge of the outside world, and his affectionate candor toward Heinrich Harrer make him one of the most endearing characters in cinematic history.

Heinrich Harrer was born on in Austria on July 6, 1912. Contrary to popular belief, Harrer did not compete on the Austrian skiing team in the 1936 Olympics in Berlin, an apocryphal factoid perpetrated by a number of unreliable sources. However, he did make the first ascent of the north face of the Eiger in Switzerland with Anderl Heckmair, Fritz Kasparek and Ludwig Vorg in July 1938. Austria was taken by Germany shortly before the onset of World War II, and Harrer, who was on a mountain climbing expedition to scale Nanga Parabat in India, was taken prisoner and held in a British Colonial internment camp near the Tibetan border.

After hoarding enough supplies to sustain themselves on the arduous journey that lay ahead, Heinrich Harrer and Peter Aufschnaiter escaped and set out for Lhasa, the Forbidden City. Having braved the harsh Himilayan terrain through a bitter winter with only meager rations, surviving the threat of attack by hostile nomads, the hardships of altitude sickness, and the likelihood that they would be denied sanctuary in Tibet, Harrer and Aufschnaiter were welcomed into Lhasa. There they were treated as honored guests, attired in the finest garments, served sumptuous banquets, and housed in royal quarters.

Harrer lived in Lhasa for nearly five years, where he taught English to the children of the court, and developed a close relationship with Tenzin Gyatso, the boy who would become the 14th Dalai Lama. Harrer was even allowed to photograph and film the royal family as they participated in sacred ceremonies never before witnessed by an outsider.

Heinrich Harrer left Tibet in December 1950, just before Lhasa was invaded by the Chinese. Upon his return to Austria, he wrote Seven Years in Tibet, The White Spider, and Lost Lhasa, along with more than a dozen other books based upon his Tibetan adventure. Thereafter, he continued to organize climbing expeditions, one of the most notable being the first ascent of the Puncak Jayadikesuma in western New Guinea, the highest peak in Oceania.

His accolades include the Gold Humboldt Medal and the Explorers Club Medal for his expeditions and explorations throughout six continents. Seven Years in Tibet has sold more than four million copies and has been translated into 53 languages. In October 1997, Seven Years in Tibet made its motion picture debut with Brad Pitt in the starring role. And despite his advancing age, Heinrich Herrer has been an outspoken advocate of human rights and has continued to maintain a close friendship with Dalai Lama Tenzin Gyatso.

About The Fourteenth Dalai Lama

Tenzin Gyatso, the Fourteenth and present Dalai Lama, was born Lhamo Dhondrub on July 6th, 1935 in the village of Takster in Amdo near the monastery of Kumbum in northeastern Tibet to a peasant family. At the age of three, he was recognized as the reincarnation of the Dalai Lama. Much mysticism surrounded the discovery of the new Dalai Lama. While the body of Thupten Gyatso still lay in state at the Potala, it is said that his face turned to face northeast. Soon thereafter, a vision of the house where the next Dalai Lama would be found appeared to Reting Rinpoche, a Tibetan regent, as he gazed into Lake Lhamo Latso in southern Tibet. He saw the letters Ah, Ka, Ma, along with the image of a monastery with a jade green roof, and a humble house with a turquoise roof and unusual gutters.

For the letter Ah, a search party was sent to Amdo in the northeastern province of Tibet, and then to the Karma Rolpai Dorje monastery in Kumbum, with its turquoise roof, for the letters Ka and Ma. There they found the house with the unusual gutters. A search of the surrounding villages revealed a house with an ancient juniper bush on the roof, where they sought lodging for the night. There they found an infant boy named Lhamo among the members of the household. The leader of the search party, pretending to be an ordinary servant, played with the child, who took to him instantly and called him Sera Lama, for the name of the monastery where the lama had once been a disciple. A few days later, the party returned with a collection of personal artifacts that had belonged to Thupten Gyatso, the former Dalai Lama, including rosaries, drums and walking sticks. When presented to the child along with other items that had not belonged to the Thirteenth Dalai Lama, the boy Lhamo claimed all the correct items as his own. Convinced that the child was the true reincarnation of the Dalai Lama, he was taken to Lhasa, but only after paying a substantial ransom to the Chinese provincial governor for his release.

Tenzin Gyatso was enthroned on February 22, 1940 in the Potala Palace at Lhasa at age four. His eighteen-year spiritual training began at the age of six, and was completed when he received his Ph.D. in Buddhist Philosophy at age 25. In October 1950 however, in the midst of his training, The People's Liberation Army of China invaded Tibet, and Tenzin Gyatso assumed full power as the Fourteenth Dalai Lama on November 17, at the age of fifteen. Political unrest continued to escalate, and by 1959, the Dalai Lama was forced to flee Tibet for India with nearly 80,000 followers. On March 17, 1959, the Dalai Lama escaped from the summer palace at Norbulinka with his family. For nearly five decades, from his headquarters at Dharamsala, India Tenzin Gyatso has worked relentlessly to restore the sovereignty of Tibet through peaceful, non-violent means, and to preserve the historical and cultural heritage of the Tibetan people. On December 10, 1989, Tenzin Gyatso was awarded the Nobel Peace Prize for his efforts.