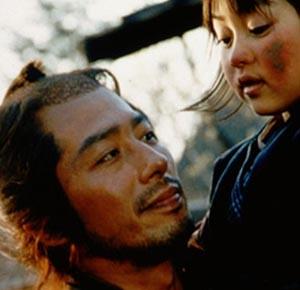 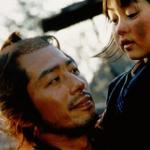 Edo Japan on the eve of the Meiji Restoration is the setting for this understated samurai drama, in which Siebei Iguchi must sacrifice his idyllic family life to obey the orders of the daimyo. Iguchi is a minor samurai, serving as a provisions officer in Yamagata Prefecture, in the village of Unasaka.

Recently widowed, Iguchi is left to care for his two young daughters, Kayano and Ito, along with his mother Kinu, who suffers from mild dementia. As a samurai, his appearance is far from compliant with the standards of his rank, unkempt, with disheveled hair, clothes in disrepair, and a distinctly unpleasant odor emanating from his unwashed clothes and body. Nonetheless, his reasons are noble. With every waking hour spent either in service to his daimyo, or caring for his family. And when the day's duties are done, he sits by the hearth assembling cricket cages, which he sells to help make ends meet. His co-workers have nicknamed him 'Twilight Samurai', because he must hurry home from work each evening instead of drinking and reveling with them at the local pub. But to Iguchi, caring for his family is worth the sacrifice. Life is humble, but happy.

However, his life becomes complicated by both romance and politics, when Iguchi's childhood sweetheart Tomoe, who is now married to a high-ranking samurai captain, seeks refuge with Iguchi from her abusive husband. When the captain challenges him to a duel of swords, in which Iguchi defeats him using only a stick, his esteem as a samurai becomes the stuff of local legend. And just when it looks as if Iguchi and Tomoe may rekindle the romance of their youth, a tragic turn of events takes place in the capital city.

When Lord Tadatomo dies of measles, a revolt breaks out among the retainers in Edo, and the daimyo orders them to commit suicide. All except one, Master of the Watch Zenemon Yogo, follow his dire order. Now holed up in his private estate, Yogo has evaded all attempts to assassinate him, and the duty now falls to Iguchi, chosen for the task because of his skill with the short sword, an ideal weapon for a fight within a narrow enclosure. So at the risk of losing all that he holds dear, Iguchi hones his rusty sword, dons his finest attire, and sets off to Edo for a fight to the death.

Based on the novel by Shuuhei Fujisawa, and directed by Yoji Yamada, The Twilight Samurai is an elegant, even-handed and understated work that pays homage to the ancient samurai tradition without glorifying its brutality. The subtleties and implications of honor and allegiance are masterfully revealed in artfully crafted dialogue, punctuated by silence that speaks all. No crescendos, no swaggering heroism, just a simple story of doing what one must.

The Twilight Samurai is available on DVD at Amazon.com.