The Fox and the Foreigner 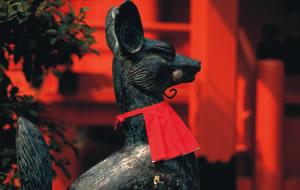 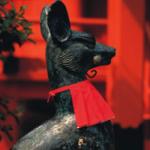 What is life but a series of experiences? And in Japan, even seemingly ordinary days rarely fail to yield some unexpected highlight. But, as with any culture, travel often affords the most memorable ones.

Having spent the better part of a year slaving away in the Modal Auxiliary Mines (my term of endearment for the English conversation school in Tokyo where I teach), my companion and I decided to make a long-awaited journey to Kyoto. As promised, the fall season showed itself radiantly, and perhaps nowhere quite as strikingly as in the mystical setting of the ancient capital.

The days were clear and polished, with enormous banks of snow-white cumulus clouds hovering on the horizon's blue-purple hills. At day's end, in the long rays of the October sun, these cloud banks were transformed into glorious kaleidoscopes of color, soon to be subdued and soothed by the onset of twilight sparked by the twinkle of the evening star.

Kyoto enchanted us. Kyomizu Temple, with its three fountains for health, wealth, and wisdom, refreshed us. Kinkaku-ji, the temple of gold, both resplendently opulent and ironically unpretentious, dazzled us. Ryoan-ji, the raked sand and pebble garden with its fifteen stones, hypnotized and quieted us.

Outside Kyoto, to the north, the tiny hamlet of Ohara was a two-day haven. Wooded paths, lined with tatami tea rooms and local crafts shops, wound their way along the river into the hillsides which revealed quietly secluded cloisters: Jakko-in, older almost than time itself; Hosen-in, with its garden so meticulously beautiful that the viewer is an essential dimension of its very existence, and Sanzen-in, where barefoot priests entreat visitors to sit for a few quiet moments in contemplative solitude to copy a Buddhist devotional onto fine rice paper with bamboo brushes.

With all of that beauty etched in our memories, we made our way to Nara, another of Kyoto's satellite cities. The day was a national holiday and, predictably, natives and tourists alike made their pilgrimages in tens of thousands.

We soon grew weary of the slow parade and gravitated toward the hills in search of less populated surroundings. Our chosen path led us through a residential area, and along the way we happened upon a small, sloped pasture where several deer grazed quietly. They were quite tame and I regretted having nothing to feed them. My resourceful companion spotted a persimmon tree laden with fruit, so we picked all that we could reach and fed them to the grateful deer who had long since devoured all of them that they could reach.

By now it was past noon, and after the climb into the hills, we were feeling the need for our own repast. The neighborhood offered two choices: a Chinese-style café and a tiny soba restaurant. We opted for the latter because it had a lovely shaded arbor with low benches and a Siamese cat roaming playfully about.

Soba, thin buckwheat noodles served in a savory broth with various toppings, is one of Japan's more palatable dishes. But this particular soba shop, being the out-of-the-way place that it was, provided neither English menus nor English speakers. Armed with my trusty pocket dictionary and knowledge of katakana and hiragana (the two simplest of Japan's three alphabets) I attempted to decipher the menu selections inscribed on wooden paddles which hung in a row on the wall. Unfortunately, they were mostly in kanji (the third and more difficult pictograph alphabet). And although the waitress kindly pronounced the kanji for us, most of the words were not contained in my now hopelessly inadequate dictionary. Of the entire array, there were only three that I could positively identify: herring, which I detest, egg, which I'm allergic to, and something called KITSUNE (pronounced Keet-soo-nay). Kitsune...Kitsune...I thumbed my dictionary. It was in there all right, it's the Japanese word for FOX! Ye Gods! I thought. If Kitsune is fox, what could all those other dishes possibly be? Possum? Raccoon? My mind ran rampant while my appetite grew more ravenous with each passing moment. And of course my friend, who will eat most anything, ordered the herring soba and left me in a quandary.

It was a long way to the bottom of the hill in search of an alternative lunch, and besides, I was being silly. I should just order something. As Kiyoshi, a Japanese friend of mine, is fond of saying whenever I inquire as to the nature of unfamiliar dishes: "It's FOOD, eat it!"

By this time, the restaurant had filled up and suddenly, all around me, I heard requests and orders for "Kitsune soba", "Kitsune soba, futatsu kudasai." ("for two, please.") Finally, hunger and reason prevailed. If all those people were ordering it, it couldn't be that bad. So I called the waitress over and ordered a Kitsune soba for myself. A few minutes later, much to my surprise and relief, a steaming bowl of buckwheat noodles arrived, topped not with filet of fox, but with a lightly sweet and golden bean curd omelet. It was delicious and I devoured it as if it were the last bowl of noodles on earth.

Feeling somewhat abashed but well fueled with that hearty lunch, we visited the Great Buddha at Todai-ji and walked the path of ten-thousand stone lanterns up to the Kasuga Shrine. It was an uplifting and enlightening afternoon, one that I will always remember, especially whenever I eat soba.

We returned to Tokyo, refreshed and ready to resume our teaching. I took the first opportunity to inquire of my students about the mystery of Kitsune soba. They were amused at my naiveté and gladly furnished me with answers.

The fox is an indigenous, if not notorious creature in Japan. It is believed to have the power to bewitch or possess the spirit of anyone who looks into its eyes. The fox is also honored by business owners as a patron spirit animal. Stone images of foxes can be seen guarding almost every temple, great or small, in Japan. The golden bean curd omelet is called ABURAGE (pronounced Ah-boo-rah-gay) and is often placed upon the altars of the temples as an offering to the gods who reside there. Foxes are fond of aburage and are said to steal into the temples under the cover of darkness to whisk away the tasty fare left there for them. And thus, this bewitching bit of lore gives Kitsune soba its name.

So, if your travels include a visit to Kyoto and the surrounding countryside, stop to enjoy its beauty and its spirit. And when your appetite beckons, do step into a nearby soba shop and treat yourself to a steaming bowl of YOU-KNOW-WHAT.