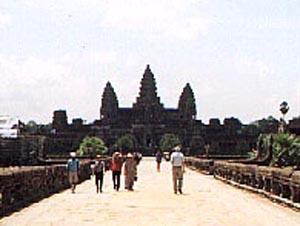 The Long Walkway to Angkor Wat. 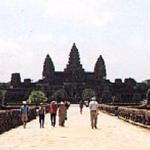 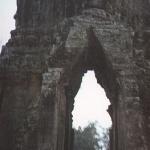 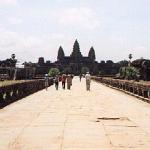 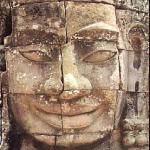 In Angkor lies the hope of all Cambodia. Angkor is a symbol the past glory of the Khmer people; it is an engine of development and employment; it is even an informal classroom for young Cambodians, eager to practice their English with foreign tourists. Angkor Wat is the only building appearing on a nation's flag, and Angkor is the name of Cambodia's national beer. Hotels in Siem Reap are obligated to include Angkor, or one of its subsidiary temples, in their names: Grand d' Angkor, Paris Angkor, Bayon, Banteay Srey.

Cambodia's willingness to place so much hope in one thing indicates how little hope Cambodia has had in recent times. Angkor is, after all, an assemblage of ruins. The Khmer Empire has declined since the 13th and 14th centuries; in the last 30 years it has collapsed; under the Khmer Rouge it nearly self-destructed. Significantly, tourists seeking to show off their visit to Cambodia commonly do not buy an Angkor Wat T-shirt. Instead, they buy a T-shirt imprinted with the skull-and-crossbones and the words, "Danger!! Mines!!"*

Though Angkor may represent the decay of the Khmer Empire, it is nevertheless provides insight into that empire's enormous power. Angkor is the most massive, and simultaneously the most complex man-made construction I have ever seen. I still doubt that mankind built it, and not some race of enlightened aliens. Alongside Angkor, our glass-and-steel skyscrapers are insipid - mere machines. The first thing you see approaching Angkor Wat is not the wat, but its square moat, which is wider than the length of two football fields placed end-to-end. Thick jungle blocks your view. As you drive closer, the wat is revealed to your eyes as if the vegetation formed a curtain slowly drawn aside. As you stand at the West Entrance, remarking upon the wat's 65-meter central prang, you would never imagine that the prang is still almost a kilometer away.

Like many temples in Southeast Asia, Angkor Wat remains a living part of the local culture and economy. Once inside the outer wall, you are liable to see Cambodian peasants mowing the grass - with sickles. It is a daunting undertaking, and the resulting heaps of hay will be hauled out to feed livestock. Buddhist monks and laymen still come here to worship and to meditate; and the wat's many Buddha statues are tended by female Buddhist hermits. These women seldom leave the temple. Instead, they pass their days giving flowers or incense to visitors as offerings to the Buddha.

I had barely entered the rectangular compound of the central prang when I was approached by a 19-year-old, who spelt his name "You Sirath." He had been studying English for two years, and his speech was fluent. His knowledge of the history and architecture of Angkor, however, was not. "I learn English first," he said, smiling. "Then history." A friend of his joined us soon after. His English was more shaky, as was his confidence, but he was as eager as You Sirath to get the free practice.

One feature common to the ruins of Angkor is the precipitous staircase. To some have been added metal banisters and reassuringly new stone steps; without them you would have to crawl. This steepness was intentional. Crawling is a sign of your servility to the god-kings. The steepness is also intended to represent the difficulty of spiritual progress: in Hinduist architecture, the central prang represents Mount Meru, abode of the gods.

Angkor Wat is like a maze. The many concentric squares forming its plan, and its many crisscrossing passageways, can easily disorient a first visitor. At one point, I found myself in a place I could have sworn I had already been. You Sirath smiled and pointed to the ground: grass. "Ah," I said. Before it had been stone. Everything else appeared identical.

This complexity on a large scale is found in equal measure on the small scale. The walls are covered with intricate floral designs and ancient Khmer script. The labor, the patience, and the devotion this required are incomprehensible.

You Sirath and his friend accompanied me on the walk down the causeway leading us out of the temple. He gave me a photocopied slip of paper with his address on it - the address had no zip code and "Kingdom of Cambodia" was placed within quotation marks -- apt, given the countless changes in Cambodia's government and official name over the past 30 years.

The next stop was Angkor Thom, the walled and moat-encircled last capital city of the Khmer Empire. Five gates breach the wall - four at the compass points, one to the East-Northeast. Four stone faces looking outward cap each gate. Leading up to each gate is a long balustrade composed of a long naga carried by an army of stone giants. The often-decapitated giants are in sorry shape, and the naga is not much more than a stone cylinder, but their scale along is enough to impress.

Just a ways north from the South Gate is the Bayon, the most otherworldly Angkor monument. Here the faces of the South Gate are multiplied. 37 towers remain, each with four faces. Some, from a distance, do not resemble faces so much as piles of stone; others seem cast from the faces of the very gods. Their expressions are peculiar: the serene smiles formed by thick lips, the gently slanted eyes lacking irises, the elongated ears, the exaggerated eyebrows. Their French discoverers thought these faces sinister; certainly they are ambiguous -- eerily extraterrestrial.

Near Bayon is the temple of Baphuon, currently undergoing restoration. At the end of the walkway leading up to it, a Cambodian teenage boy approached me. After the usual questions about my origins, he told me where I could take good photographs. He then led me around to the temple's backside. Scattered all over the ground were chunks of carved stone, each marked with a code signifying their place in the overall plan. The boy explained the carvings on the stones and their role in Khmer history and symbolism. Behind the temple there used to be a reclining Buddha, as long as the temple is wide. Now only the severed, laterite head remains intact.

The more the boy explained, the clearer it became that, unlike You Sirath, his chief motivation was not the improvement of his English. He was not a licensed tour guide. Indeed, he had to hide from the park guards. For a waif, he had been very professional. But not that professional. And he had been deceptive about his mercenary intentions. As I tried to talk him down from his excessive fee, he pleaded for more money. It was that same depressing confusion, as Alex Garland wrote, "between feeling that I shouldn't haggle with poverty and hating getting ripped off."

Kids like this are all over Angkor, most of them helping their parents out with souvenir sales. At the entrance to Baphuon, a little girl carrying a wicker tube walked up to me. She popped open the tube, pulled out a bamboo flute, and launched into a desperate, 78-rpm paean to the flute's virtues. She stopped only to breathe and to execute a few abrupt melodies. Her and her little brother followed me all the way up to the staircase leading to the walkway. The boy held two flutes and, not really sure what to do with them, said, "Flute?" to no one in particular.

As the day waned, and the sun began to sink, I went to Phnom Bakheng, the temple of choice for viewing sunsets. The rule of the precipitous staircase was in effect, but in this case the hill's former staircase no longer existed; in its place was a kind of rockslide terraced by the monsoon rains.

On the top of the hill is the first major temple built at Angkor. Off in the distance to the west is Lake Tonle Sap. To the southeast is Angkor Wat, its prangs towering over the dense jungle always threatening to engulf it. In every other direction are green hills, networks of rice paddies dotted with tall palms. The view must not have been much different a millennium ago, when Phnom Bakheng was constructed.

The scene on the temple itself is very different: a discomfiting juxtaposition of early Khmer Hinduism and late Western capitalism.

"Unlike so many world class monuments," states the Siem Reap Visitors Guide, "Angkor Wat, Bayon, and the other ruins are as yet unspoiled by commercialism and over-development."

"This may not be true in a couple of years," the guide continues ominously.

"Now is a very special time to visit Siem Reap and the temples. It is still possible to discover Angkor."

*Note to tourists: buying the "Danger!! Mines!!" T-shirt is in poor taste, and wearing it amidst Cambodia's throng of begging, mine-victimized amputees is simply callous. It is almost akin to buying a T-shirt imprinted with a swastika and the words, "Achtung!! Gas Chambers!!" and wearing it around Israel. In Israel this might get you killed. In Cambodia, people are too deferential - and too poor -- not to sell you whatever shirt amuses you. Owning this T-shirt proves nothing about the danger you have encountered. You don't need to go to a minefield to get a T-shirt like this. You don't even need to go Cambodia.