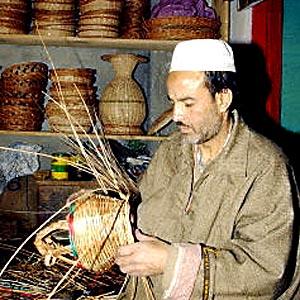 An Indian Kashmiri artesan makes a basket to contain a Kanger, a small clay pot suspended in a basket for carrying burning charcoal underneath overcoats during the winter months. 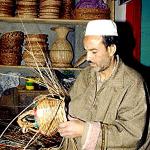 SRINAGAR, India, Dec 18, 2003 - The traditional pot used for centuries by people in Kashmir to keep warm during the harsh winters in the Himalayan region is slowly losing out to modern and more convenient heating gadgets. The small earthenware bowl held in a wickerwork frame, called the "Kanger," is filled with burning charcoal and people often carry it under their long Kashmiri gowns known as "ferans."

Previously most Kashmiris would not brave the winter weather without their trusty Kanger. But in the past two years, shops have been flooded with modern gas, kerosene and electric heaters, luring many people to leave their traditional heating pots on the shelf.

"Our business is fast losing out to the latest gadgets in heating," said Mohammed Yusuf, who sells Kangers in the summer capital Srinagar. "I have sold about 50 pieces this month," he said, adding two years ago he sold 1,000 Kangers in December alone.

The begining of December marks the onset of winter in Kashmir -- a scenic Himalayan region where a Muslim anti-Indian insurgency has left more than 40,000 people dead since it began in 1989. Temperatures can fall to minus 6 degrees Celsius (21.2 degrees Fahrenheit) in Sringar, while the town of Drass, high in the mountains, 130 kilometres (81 miles) northeast of Srinagar, promotes itself in tourists brochures as the second coldest inhabited place in the world after Siberia. The temperature there can plummet to minus 40 degrees Celsius (minus 40 Fahrenheit).

Gas-run heaters made in India or imported from Turkey, Iran and Japan are selling like hot cakes in Srinagar this year, despite the high prices. "I am doing good business these days," said Harvinder Singh, who owns the "Dimples" ice cream shop in Srinagar, but switches to selling heaters in the winter. Singh said the initial demand for the new heaters was from richer families and government departments.

"Now even middle and lower middle class people are purchasing these heaters and saying goodbye to the Kanger," he said, as a customer walked away with a Turkish-made heater costing 10,000 rupees (220 dollars).

Housewife Haleema Akhter said modern heaters were risk-free and easy to operate, compared to the Kanger, for which people have to store charcoal for the entire winter which lasts until March.

Every year police report scores of cases when the Kangers cause fires, leading to injuries or damage to property. Kashmiris doctors said most burn injuries in the winter are due to accidents with the heating pots, which can also cause skin problems.

"Excessive use of the Kanger leads to chronic skin disease of thighs and arms," said surgeon Parvez Masudi. He said it also causes lung ailments.

But the decline of the Kanger is bad news for those who manufacture, sell and repair them. "This winter there is no work. I have been earning by working as a coolie," said Abdul Samad, 55, who repairs damaged Kangers. Samad said he used to be in great demand with the onset of winter. "But I and many like me are looking for alternate jobs now," he said.

There is no government figure on how many people are directly or indirectly engaged in the Kanger trade, but the number is believed to be in the thousands. "In a few years this business may die down completely and we may lose a symbol of our identity," said Imtiaz Peer from western Chrar-e-Sharief town, which is believed to produce the best Kangers.

Asian Films Play "I've Got a Secret" at San Jose'sCi...