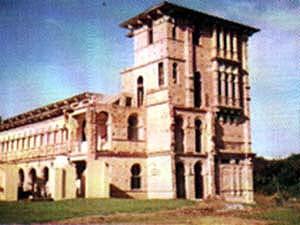 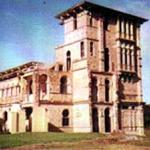 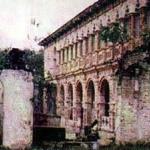 For many years, Kellie's Castle has been shrouded in mystery thicker than the undergrowth surrounding the building. Today, it is a restored and meticulously maintained tourist attraction.

A Symbol of Love...
Kellie's Castle which is located in Batu Gajah, Perak may not be as famous as the Taj Mahal in Agra, India, but both buildings have many other similarities. Just as the Taj Mahal represented the undying love of a Moghul King, Shah Jahan for his wife Mumtaz Mahal, Kellie's Castle too has a tragic love story of its own. Kellie's Castle, built by a Scottish planter called William Kellie Smith as a castle of love for his wife. Smith himself was from a small town in Scotland known as Kellas. In 1890, at the age of 20, he arrived in the then undeveloped Malaya. Here, he met an estate owner called Alma Baker, who had won concessions from the state government to clear 360 hectares of forests in Perak. With the substantial profits made from his business venture with Alma Baker, Smith started planting rubber trees and dabbled in the tin mining industry. In time, he became the owner of Kinta Kellas Estate and the Kinta Kellas Tin Dredging Company.
Now with his fortune made, he returned home to marry his Scottish sweetheart, Agnes, and brought her over to Malaysia in 1903. The following year, the couple was blessed with a daughter named Helen.
For many years after that, Agnes tried to conceive, but to no avail. William Smith desperately wanted a son and heir to take over his empire in the Malay Isles. After many years, Agnes finally gave birth to a son called Anthony in 1915. The birth of his child was the start of even greater success for William Smith. To celebrate Anthony's birth, William Smith decided to expand on his mansion. Smith started planning for a huge castle which he planned to call Kellas House, after his hometown in Scotland.

The "Kellas House"
Because of his fascination with the Hindu religion and the Indian culture, Smith's plans was for this house to share similar architecture to those of Madras, with all its bricks and tiles imported from India. He even employed a big group of Indian laborers to build his dream house, to keep the Kellas House authentically Indian. The mansion is accessible from the main road through a bridge running across a stream.
But it was not only the cost of importing material and laborers from abroad that made the house so fascinating to fascinate locals and travelers alike. Among the many amazing things about Kellie's Castle include an elevator (unheard of in Malaya in those days, the one built in Kellie's Castle is the first in Malaya) which connects right up to the top floor and the existence of two tunnels that run under the river nearby. One of these tunnels connects to the Hindu temple some distance away to the main house. On the second floor, Smith planned to build an indoor tennis court -- an ambitious project even by today's standards. On the highest floor, there is a rooftop courtyard for parties. This castle was to be the hub for entertaining wealthy colonial planters who have settled in Malaya. His house was so unique that it was even mentioned in the London Financier newspaper on 15 September 1911.

Tragedy!
Unfortunately for Smith, tragedies struck soon after the construction of the Kellas House begin. A virulent strain of the "Spanish flu" spread from Europe to Asia soon after World War I ended in Europe, killing many of the workers in Kellas Estate. Another seventy workers constructing Smith's dream castle also became victims of the flu. Smith, who has already spent a fortune on his house, lost a lot of money because of this.
In the end, Kellas House was never completed. William Kellie Smith himself died of pneumonia during a short trip to Portugal in 1926. His heartbroken wife decided to pack up and return home to Scotland selling the estate and Kellie's Castle to a British company called Harrisons and Crosfield.
For some reason or other, Kellas Home, later known as Kellie's Castle or even Kellie's Folly to some, was never completed. However, despite more than eighty years of vandalism and neglect until the government refurbished the house in 2000, the building remained a tourist attraction for many years prior to that.

Kellie's Castle Restored
Today, visitors can still "meet" William Kellie Smith and his two children at Kellie's Castle. Sculptures of them are still standing on the exterior wall, but the one of his beloved wife fell off some years ago. For safety reasons however, the tunnels have been sealed off. Apparently, one of Kellie's car is parked somewhere in one of the tunnels! Despite the ravages of time and neglect, the entire estate oozes with romanticism of the colonial era in Malaya.
After visiting Kellie's Castle, do not forget to take a short walk to the Hindu temple constructed by Smith to appease the Gods after his workers died of the Spanish flu. The architecture of the temple is a curious mix of Moorish, Greco-Roman and Indian design. Encapsulated forever in a moment in time is the odd, misplaced figurine of Kellie in his planter's suit and topee among the sixty deities on the temple roof.
Few temples around the country actually owe their existence to a colonial expatriate like this insignificant temple in the outskirts of Batu Gajah. And obviously the Hindu temple held enough fascination for William Smith to build a secret tunnel connecting the temple and his house.

Travel Information: Kellies's Castle is located on a ridge by the river along the Batu Gajah - Gopeng Road. Etched against the blue sky, the newly restored building exudes an air of dignity and grandeur. For more information, log-on to http://www.virtualtourist.com/kelliecastle