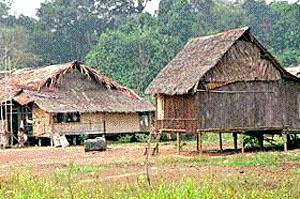 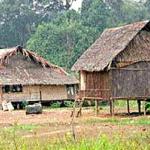 "LOOK, it's a snake!" exclaimed my teenage son as we started our short trek into the Tasik Bera campsite. Everybody leaped, turning pale in the process.

"Don't worry, it's only a harmless python," explained our guide.

That was just one of embarrassing moments during our recent weekend trip to Tasik Bera, Pahang.

For city folk like my children who think that spectacular wildlife can only be seen in the Amazon, in zoos or on telly, a trip to Tasik Bera soon dispelled such notions. Only a four-hour drive from Kuala Lumpur city center lies the Tasik Bera wetlands, which is a treasure chest hosting an array of amazing wildlife. From mammals to insects, and from birds to fish, they can all be observed in their natural habitat, undisturbed and untouched by man. All seems so different; radiant, full of life and beautiful.

A natural freshwater lake, it is surrounded by a patchwork of dry lowland dipterocarp forest, islands of peat swamp as well as rich wildlife and vegetation.

Of all the lakes and wetland sanctuaries in the country, Tasik Bera has an ecosystem, which supports not only a diversity of animals and plants, but it sustains the livelihood of the Semelai tribe, the Semelai Orang Asli (literally translated as Man of the Land) inhabiting the wetlands. Today, the Semelai folk, who are natives of the land for more than 600 years, have a new occupation introducing gawking urban dwellers to their way of life.

The lake, covering 24,000 hectares, is also one of the two major natural bodies of freshwater in Malaysia and the largest freshwater swamp in Peninsular Malaysia measuring 35km long and 20km wide. Described as a beautiful area made up mostly of inlets and channels in an extensive maze-like swamp, the lake is broken up by fields of meter-high reeds, clusters of pandanus plants and rows of dense foliage found in the open water.

Teeming with wildlife and vegetation, the extended wetland area and surrounding forests still support tigers, tapirs and elephants, all endangered species, and small mammals like the clouded leopard, mouse deer, bears and the flying lemur. As open water extends to only one per cent of the area, the lake is also the home for the rare crocodile species called the Malayan False Gharial.

The Semelai folk, some who can speak basic English, have an extensive knowledge of both the forest and the lake, and therefore an important choice as guides. A tourist will find it far more interesting with a local guide who will be able to give both cultural and environmental interpretations of the place. Inolan, our Semelai guide, pointed out a tree called midar. According to him, the leaves are boiled for a drink to ward away evil spirits.

"It is also believed that by drinking the liquid, one can cure a number of illnesses such as stomach pains," he explained.

One of the most useful trees in the jungle is the Keruing, which has quite a number of uses. The resin can be used to make perfume as well as fuel for light torches.

Inolan later showed us the Kemenyan tree whose bark is used for prayers as well as a charm.

"Some people burn the bark in a ritual of some kind to woo the girl they like," he said with a laugh.

We were also invited to a traditional wedding that night. We anticipated an authentic Orang Asli ceremony where the bride and groom would be dressed in elaborate aboriginal war costumes a la The God's Must Be Crazy. Some of us were even looking forward to sit on hand-made mats while feasting on barbecued wild boar, roasted tapir and fried orang utans. However, when we arrived at the bride's house where the wedding was held, the scene was not what we expected.

The wedding was held in a typical Malay village house where the host had set up zinc tents and long tables for dining. Indeed, the scene was very much like a Malay home wedding, but there was one structure in the compound that was a shocker: a 1.2m-bamboo-made stage where a rock-and-roll band was to perform.

The most unique part of the ceremony was when the Semelai groom took a few puffs from a cigarette the kadi (the person officiating the ceremony) is smoking and pass the stick to the bride. The bride will then take a few puffs for herself and then pass it back to the kadi. Once the cigarette cycle is complete, the kadi will ask for confirmation from his wali (who functions like the Semelai version of a priest) of the legitimacy of the couple's marriage. If so, the wali will respond by saying, "saaaah"!

All the guests, young and old were also served with a special drink called Tuak. Tuak is the Orang Asli version of wine that's usually served during Semelai celebrations. It can be made from sugar cane or banana juice. We had to wait for a few hours to taste it though, in line with the Semelai tradition that the village head, Batin Kampung Gao, and the chief of the village head committee, Ketua Batin, must come and officiate the tuak-drinking ceremony before it is served to guests.

Despite this slight hitch, the wedding was an enjoyable one that had the crowd dancing till the wee hours of the night. These people sure know how to party!

Although it was extremely uncomfortable for my children to sleep in the tent we were allocated to, tiredness soon overtook them. Even my daughter, who proclaimed she's not going to sleep in case a bear comes visiting at night, soon fell asleep.

Early the next morning, it was time to leave Tasik Bera. My children told our Semelai guide they'd be visiting the wetland again in the near future, but with more mosquito repellent to ward off the insects.

Tasik Bera has a whole lot of activities for those who are game for an encounter with nature. There are adventure trails, a slow ride down the channels in dugout canoes, fishing, swimming, bird watching, jungle trekking and night spotting, among others. There is also a chance to check the bamboo traps, which are set to catch small mammals or to buy handicraft, direct from the villagers that make them.

Drive via the Karak highway and then south towards Triang. Before Kampung Kerayong take this junction and follow the signs to the northern end of the tourist facilities.

Alternatively, via Kuala Pilah and Bahau and the look out for the signposted junction that will lead you north of the road. From then on, just follow the signs. By train to Mentakap or Triang and then overland to Tasik Bera.

Tasik Bera is open all year long. Wet seasons are between April to May and September to January. The drier months usually fall between February and April and June to August.

For more details on staying Semelai house, or experiencing a homestay with a Semelai family check out this site.