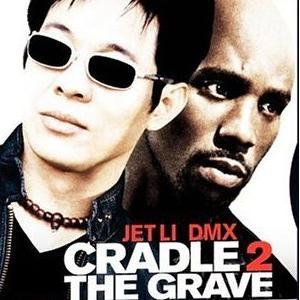 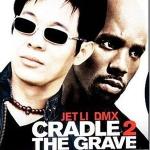 Every major martial arts star has one thing that they do especially well- their general "character" in martial arts movies. Bruce Lee and Jackie Chan shared a major one, the idea of the average (or not-so-average) guy getting thrust into a conflict much larger than themselves, and that they're unprepared for what it may bring, but they follow through until the end. Jet Li, the latest in a long series of martial arts stars, does two things well. On one hand, he plays epic heroes fighting for the honor of China . However, his other persona is the polar opposite: Li tends to play the street hero. He plays the bad cop, the scorned assassin, or simply a wronged specimen of physical power. In Cradle 2 The Grave, where he stars with  the rapper DMX, he shows great talent in a high-octane action-packed film.

DMX plays Anthony Fait, leader of a small gang whose specialty is top-tier theft from the immensely rich residents of their native Los Angeles . Their latest target is a bank, where a huge cache of gemstones, jewelry, and other riches are stashed. However, they're not there for just any old gems- they have their sights set on a crop of twenty black diamonds, unlike like anything anyone has ever seen. The heist goes down almost without a hitch, until the crew discovers that they've made off with more than their fair share of trouble. Not only do the gems hold a secret more dangerous than anything known on the planet, but they are (or were) the property of Fei Ling, a high class Taiwanese arms dealer played by Mark Dacascos, who will stop at nothing to retrieve the jewels.

Enter Su, a Taiwanese inspector played by Jet Li, who has been tasked with the retrieval of the stones. However, when Fei Ling and his henchmen kidnap Fait's daughter, Su and Fait have to team up to take down the sinister arms dealer before he unleashes the power of the stones on the world.

Admittedly, the movie had a lot of weak points. DMX may be a skilled street fighter, but a ninja he is not. Seeing him run up a wall and backflip off it 15 minutes into the movie seemed more like a needless waste of stunts than a stylistic element. The acting isn't great, but it's better than one would normally expect from an average action movie, and it wasn't bad enough to detract from the movie. Moreover, the good far outweighed the bad. One scene takes place at an underground fight club that pits Li against an army of steroid-pumping assailants, many of whom were actual UFC fighters, and had extensive experience in actual no-holds-barred fighting. Indeed, in the background of that scene, two guys appear to be beating each other to a pulp... except they're really doing it. The two fighters are actually UFC champions, wailing away at each other full strength. The action tends to come out in bursts, with 10 to 15 minutes of action, followed by a chunk of plot movement, which worked in favor of the movie.

Another good element was the inclusion of Anthony Anderson and Tom Arnold as comic relief. Anderson plays Tommy, a member of Fait's gang, and Arnold plays Archie, a pawn shop owner, information broker, and general wimp, who gets drawn into the fight when he is recruited to appraise the worth of the stolen stones. Tommy's lack of physical skill makes him a prime candidate as a distraction, which he does with style and wit on more than one occasion, including posing as an exterminator, and seducing a gay security guard. Arnold 's character provides information, plot movement, and intermittent one-liners.

Cradle 2 The Grave delivers everything one would expect from a martial arts movie of its type: mediocre plot, great action, a bit of humor, and a wholly enjoyable experience. Not an amazing or groundbreaking film, just a good, old-fashioned beat-‘em-up movie.

Cradle 2 The Grave is available for purchase at Amazon.com.