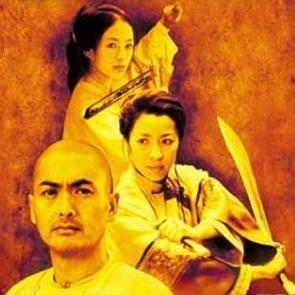 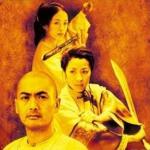 Chow Yun-Fat plays Li Mu Bai, a master swordsman and veteran warrior, who longs to leave his world of battle and bloodshed behind. In his effort to do so, he gives his prized blade, the legendary Green Destiny Sword, to a local lord by the name of Sir Te. Li Mu Bai's efforts to discard his martial lifestyle and settle with Shu Lien, a fellow warrior and his longtime love, are cut short when the Green Destiny is stolen, and his chance to avenge his master’s death at the hands of Jade Fox comes into grasp, he finds that he must take up the sword once more before he can rest.

The thief turns out to be the daughter of another local lord, Governor Yu. Jen Yu, played by Zhang Ziyi, is slated to be married soon to the son of another powerful lord, but she loathes the idea of doing so. Her true love is a desert bandit by the name of "Dark Cloud" Lo, whom she was involved with after a raid on a convoy on its way to the west. In despair, she turned to Jade Fox, who attempted to teach her the stolen secrets of Wu Dan martial arts. As her marriage day draws near, and Li Mu Bai closes in on the two in an effort to avenge his master’s death, all roads come together as the simple theft of a sword determines the destiny of everyone involved.

Fundamentally, Crouching Tiger, Hidden Dragon is a perfect movie. It is flawless in its execution, perfectly balanced between story and action, with no superfluous scenes or unnecessary action, but exactly what it needed to execute a well-told story. The roles were cast perfectly, the choreographer did an amazing job crafting the fighting scenes, the story had no holes or flaws that made it unbelievable or difficult to follow, and the characters were performed so powerfully that it was impossible not to care about them.

The success of this movie inspired the formal American releases of many movies of a similar style and substance: Hero, House of Flying Daggers, Fearless, and the most recent, Curse of the Golden Flower. However, no matter how successful or well-done the movies that come after are, none will ever live up to the power of the movie that started it: Crouching Tiger, Hidden Dragon.