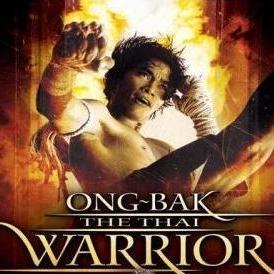 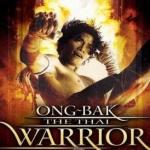 Martial arts movies have always been defined by their stars. Charismatic and skilled individuals such as Bruce Lee, Jackie Chan, and Jet Li have made martial arts movies popular. And now, it appears that a new star may be rising on the martial arts horizon. Tony Jaa, a master of Muay Thai, has begun to star in movies. With his amazing stunts and his brutal martial arts style, Jaa is slated to be the next big name in martial arts cinema. Ong Bak: Thai Warrior showcases the up-and-coming Jaa in his first leading role. Featuring hectic action and vicious martial arts scenes, Ong-Bak is an excellent example of his emergent talent.

Jaa plays Ting, a member of a small Thai village preparing for a festival that comes only once every twenty-four years: the Ong-Bak festival. Ong-Bak is a guardian deity whose statue is worshipped by the town. However, when a village elder is unwilling to sell a cherished trinket to the scoundrel Don, he decides to make off with Ong-Bak's head instead. Ting, master of Muay Thai, is recruited to retrieve the head of the Ong-Bak, which is now in the hands of a big-time gangster, whose main ventures are fight clubs and the theft of statues. Ting must retrieve the head of the statue in time for the deity to bestow its blessings on the Ong Bak festival. Fortunately, he is not without allies. His fellow villager George, and Muay, his protégé and partner in crime are there to aid him in his quest.

The fighting in this movie is top-notch. Jaa and his fighting style are amazing to watch, and the action tends to last for extended stretches of time, with back-to-back fights, chase scenes, and vicious brawls. Early in the movie, a chase scene through the crowded Bangkok marketplace features a series of stunts so unbelievable that it takes more than one view to fully recognize the stunt. Not to worry, because most of the stunts are shot from more than one viewpoint, and every breathtaking backflip, somersault, and dangerous dive is showcased from angle after angle and played out in a satisfying series of instant replays. Even better is the juxtaposition of Ting's skills and George's lack thereof.  Everything that Ting executes perfectly is followed by George's comedic botching of the same technique, which makes for excellent comic relief.

However, the real focal point is Jaa's Muay Thai fighting style in action. Muay Thai is an ancient martial art, specializing in short strikes such as elbows and knees, using agility and grappling to keep the opponent at a tactical disadvantage, often allowing Jaa to score blow after unanswered blow. In a single scene, his foes range from the hulking Big Bear, and an agile, afro-wearing fighter, to Mad Dog, a chair-smashing, table-hurling opponent whose fighting style involves using his surroundings to put his enemies at a disadvantage. Depending upon his foe, Jaa responds with a different style to maximize his strengths and nullify those of his opponents.

Jaa rarely speaks in this movie, but it seems to suit his character. The plot is actually driven by the supporting cast of George and Muay, who do most of the talking, and who direct Ting onward in his quest. The plot may be cheesy, but it's better than many films of this genre. Ong Bak also presents a dilemma:  whether to view the English-dubbed version or the subtitled version. While the dubbing isn't good, the Thai language itself is so rapid-fire and high-pitched at times, that it may distract and detract from the movie.In the end, it comes down to viewer preference. Either way, Ong-Bak: Thai Warrior is a great brawler for any fan of martial arts movies, if only to become familiar with one who is sure to be a rising star in a galaxy of martial artists.

Ong-Bak is available for purchase on Amazon.com.