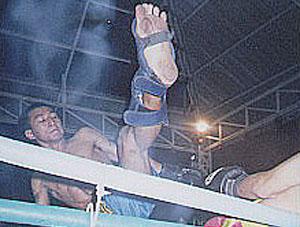 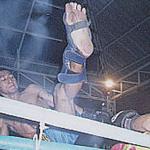 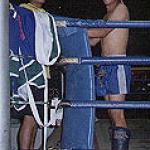 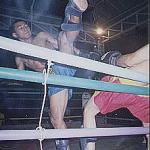 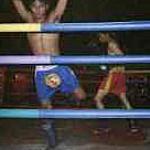 The village of Chang Khien, hard by the old city of Chiang Mai, is home to the Lanna Muay Thai training camp for would-be practitioners of the ancient art of Muay Thai, or Thai boxing. Surprisingly, most of its trainees are not Thai, and many are not men. Many of these foreigners have traveled halfway across the globe simply to learn this unique style of combat. Why? And what makes Muay Thai unique?

Muay Thai differs most noticeably from Western-style boxing in its permitting the use of elbows, knees, feet, and certain holds and throws. It also permits a wider range of targets: to strike "below-the-belt" is advantageous, not illegal. Even referees occasionally get tangled up in the affray. To an uninformed spectator, a Muay Thai match may seem a lawless, graceless brawl. But certain tactics are prohibited: head-butting, choking, and hair-pulling, to name a few. On the other hand, Muay Thai differs from Asian martial arts in its use of boxing's ring and uniforms, timed rounds, padded gloves, and in the grappling of sweaty opponents.

Thai boxing's brutality is well-known. Many matches have ended in the death of one or both of the contestants, due to a cut eye or a smashed solar plexus. That more matches /haven't/ so ended is a testament to the sinewy strength of the boxers. Indeed, much of their training consists simply in learning how to repress pain.

Hardy Stockmann's book /Muay-Thai: The Art of Siamese Un-armed Combat/ documents a series of competitions in which Thai boxers were challenged by experts of kung-fu, tai-keck, karate, and Western-style boxing, as well as foreign Thai-style boxers. Writes Stockmann: "In the three years from 1972 to 1974, Thai fighters weren't knocked out once in fifty-five bouts against 'others'....Thais had remained invincible."

Thai history contains further instances of the Muay Thai mystique. During a period of vassalage to Thailand's arch-enemy Burma, a Thai named Kanom Tom defeated ten Burmese in hand-to-hand combat. The 18th-century Thai monarch known as King Tiger posted a similarly impressive record. Disguising himself as a commoner, he went into a village and challenged its boxing champion. The fight ended in half a round, with King Tiger victorious and richer by a tical, Siam's former currency. After humiliating further challengers, he - according to historian M.L. Manich Jumsai -- "came away well contented."

This invincibility was further confirmed in the 2000 Summer Olympics in Sydney, where a Thai took the gold in kickboxing. That Thailand will medal in its national sport is generally taken for granted. Nonetheless, the champion became a national hero -- feted, paraded, and much enriched by massive monetary gifts from wealthy Thai nationalists.

Muay Thai dominates televised sports in the kingdom. Two sounds characterize a match underway: the chilling, grating sound of the /pi/ flute; and the short, distinct roars of the crowd following each successful blow. These sounds carry quite far: I can hear them from a Thai army camp about a kilometer's walk through dense jungle from my home.

Muay Thai is also marked by its pre-fight rituals. Each boxer begins by performing the /wai kroo/, or homage to his teacher (/kroo/). Kneeling, he brings his gloves to his eyes, and then thrice bows until his gloves touch the ring floor, praying the while. This is followed by the graceful /rum muay/ ('dance boxing'), part warm-up exercise and part exorcism ritual, which can last for several minutes.

Two articles of clothing are also unique to Muay Thai, both acting as charms against death. First is the /krooung rung/ ('charm' or 'talisman'), a band worn around the bicep throughout the match. Second is the /mongkun/ ('crown'), a cord worn about the head, which is removed before the match begins.

A Muay Thai match consists of three or five three-minute rounds. Winners are determined as in Western boxing: by knockout, technical knockout, or judgment by officials. While the fighting can be furious and aggressive, and the boxers may snarl and yell, they often embrace, smiling, once a match is complete. The smiles of the Land of Smiles extend even into its most violent arena.

However, Muay Thai is not as violent as it once was. Before the introduction of modern weaponry to Siam, Muay Thai was an essential part of any soldier's training, and its object was obviously to kill. As hand-to-hand combat became less a part of warfare, and as Siam became more Westernized, Muay Thai lost some of its ferocity. It has been watered-down further by the explosion of tourism to Thailand, so that now there are truly two Muay Thai worlds: one for Thais, one for tourists.

In Chiang Mai, the separation is evident. At the tourist venues -- Galare Food Center and the so-called Bar Beer Centers -- Muay Thai forms just one part of a comprehensive Thai cultural package, which includes classical dance and music, the famous transsexual cabaret shows, cockfighting, and the occasional performing elephant. The cabaret dancers use the boxing ring as their stage. For a small fee, tourists can even be photographed sparring with gracious Thai fighters. While pre-recorded /pi/ and play-by-play crackle out of low-watt speakers, the electrifying roars of the crowd are notably absent: the crowd itself is sparse, and usually more interested in drinking and talking to lovely Thai hostesses than in the match. The boxers themselves are sometimes flabby and awkward, and seem to fabricate falls, occasionally toppling over the ropes and altogether out of the ring. "They just act," remarks a Thai contemptuously. "In real Muay Thai you hear the punch: BOOM!"

Legitimate Muay Thai can be seen at Gawila Boxing Stadium. Matches are heralded by a profusion of handbills throughout the city, and usually feature boxers with some name-recognition. Though the large crowd is predominantly Thai, a boxer may be a foreigner trained at Lanna Muay Thai, who hopes to chip away at the Thais' domination of their national sport. The matches are heated, and the boxers bloodied and battered; and though the crowd may be doing its fair share of drinking, its focus is on the ring. A great deal of illicit gambling centers on the outcomes. But sometimes this heightened interest assumes unsportsmanlike forms: spectators razz the beleaguered boxers, all but climb into the ring, lob bottles and trash. At times Muay Thai is to Thailand what soccer is to England: merely an occasion for public displays of barbarity - by the spectators, not the sportsmen.

Why foreigners are interested in Muay Thai should now be clear. Possibly no other martial art requires so much endurance and fortitude; no other is identified so thoroughly with its nation, nor ranks with food, language, music, and dance as an element of cultural heritage; and, as Stockmann's book demonstrates, no other is more fearsome and triumphant. If the balance of power between nations were to be decided by hand-to-hand combat, the Thais might very well rule the world.