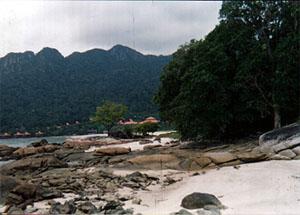 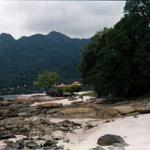 The warm tropical waters of generously bathed the shorelines of the territories that form four countries -- , , and . Out of the many islands, isles and islets which dot the , two outshine the rest in terms of international fame as island resorts, namely Langkawi and Phuket.

While its northern counterpart, Phuket, is connected by road to the mainland of and therefore is further ravaged by development and higher influx of tourists, Langkawi is protected by virtue of its more difficult accessibility. Travelers and locals alike can only get onto Langkawi by ferry or air.

Langkawi is also replete with myths, fables, legends and folklores -- hence its other nickname as the Isle of Legends. One widely spun yawn is about the unjust execution of a 19th century legendary Princess Mahsuri. According to the legends, she was wrongly accused of infidelity. Despite her protests, Mahsuri was sentenced to death. Her innocence was only proven when white blood oozed out when she was beheaded. With her last few gasps of breath, she laid a seven-generation curse over the island. Only after her seventh generation descendant was born in (her family migrated to after her death) in the 1980s that Langkawi started to prosper, rising like the legendary phoenix from the ashes. With the lifting of her spell over the island, Langkawi awoke from its long and deep slumber.

Hotels, resorts, entertainment establishments and shopping malls rapidly sprouted and mushroomed all over the island. Langkawi is today blessed with an impressive and beautifully designed airport terminal building with a runway long enough to allow the 747 Boeing jumbos to land and take off effortlessly and with mesmerizing poise. This privilege is only enjoyed by the state-of-art KLIA in Sepang and other airports serving state capitals, namely, , Johor Bahru, Kuching and Kota Kinabalu.

Besides the main island town of , which is located at the south east part of the island, an impressive number of man-made developments are found along the pristine beaches on the western seaboard of Langkawi. Nestled snuggly in the beach, amidst a lush 19-acre tropical forest, is a 150-room beach resort known as Mutiara Burau Bay Beach Resort. All the rooms in this resort are air-conditioned, cabana-styled, arranged along the theme of a fishing village. The resort is a mere 15 minutes drive away from the and approximately 40 minutes away from Kuah town.

True to its tag-line"...in the forest, by the bay", a visitor to the Mutiara Burau Bay Resort will be greeted by many ecology-friendly and informative markers set at eye-level. A sample of such special markers read about nature around

-Ficus or fig trees are one of the most important fruiting trees in a Malaysian rain forest. is one of the richest forestry areas in the world with an estimated 8500 flowering plants in and 12000 in . There are more than 100 species of figs in . Some fig trees can be flowering and fruiting simultaneously throughout the year. These flowers and fruits are important for Langkawi's fauna and birds that feed on them.

-Black-naped oriole (Orilub Chinesis): This bird inhabits mangroves and forests. Its brilliant yellow feathers and fuzzy whistling and its ability to feed on fruits and insets make it more adaptable than other birds.

-Hairy-nosed otter (Lutra Sumatrana): Just offshore from here you might be lucky enough to spot hairy nosed otters playing in the water. They have brown skin, white chin, upper throat and stomach. They also have hairy noses, hence the name.

-Kapok (Ceiba Pentadra): A tropical tree of this family Bompaccaceae and known for the fiber obtained from seeds in the ripened pods. The cotton-like substance was once used for padding in the clothing industry. Today, it is still used to stuff pillows.

-Squirrel (Scirus): It is common in . The squirrel uses its tail as a rudder for balance as a parachute during flight, as a blanket for warmth and as a flag to alert other squirrel of impending danger.

Hotel guests and other visitors will certainly feel inspired and re-invigorated by the message carried on the many signage bearing the following phrases: "We must not conquer nature. We must preserve it. Please keep our resort clean." All plants and animals are protected on the resort's property and many species can be found in the adjoining forests and along the beachfront. Guests are encouraged to discover, explore and learn from nature while in the resort and the staff are trained to help guests "open their eyes" to the natural assets of .

On the sunny afternoon I was at the resort, my eyes were feasted by the wonderful sight proffered by the dalliance of a pair of eagles soaring above the clean cloudless skyline of . The majestic raptor birds flying together in a tight formation was performing a sky writing ritual as they circled several times in an elliptical fashion. What a sight! The flawless and peerless flight of these birds of prey would even be admired and envied by the stunt area pilots of magnificent flying machines.

Part of Langkawi's name is drawn from such majestic birds of prey. "Lang" is the shorthand for "helang", which means eagle in Malay. I also chanced upon a pair of Southern Pied Hornbills, one of the smaller species of hornbills. Typical of many city folks, this is the first time I encountered hornbills free from captivity. Langkawi, with many of its forested areas still intact, is home to many hornbills, which feed on figs and other fruits from the forests. The pair of hornbills I saw took temporary refuge amidst a clump of trees within the compound of the resort. is also the habitat of the butterfly reptile, a species of salamander.

After all the nature, one can make a beeline to the three brilliant restaurants in the resort. The Burau Restaurant Terrace, the Oyster Bar & Lounge or Seashell Beach Cafe has alluring menus that will appease your thirst and hunger. The patrons of Seashell Beach Cafe, which operates daily from noon to midnight, comprise not only resort room guests, but also hotel guests from nearby beach resorts as well as other visitors to Langkawi. At the beachfront, a stone's throw away from the Seashore Beach Cafe, a bell attached to a wooden sign had been erected. Its signage beckons visitors with the following message:

"Welcome to the Friendly End of and the Cafe. Great Food! Great Drinks! Great Music! Ring the if you're happy!" From afar too, the Seashore Beach Cafe captures the attention of visitors by its 20-foot replica of the Fender Stratocaster electrical guitar. According to the marker affixed beside the guitar, it is named "The Peace Guitar". After the September 11 suicide attacks on the and Pentagon, the Seashell Beach Cafe placed the Peach Guitar at its premises as a symbol of man's desire towards creating peace through music to unite the peoples of the world. Patrons are encouraged to pen words of peace and wisdom onto plaques staked behind the Peace Guitar.

Thus, the Mutiara Burau Bay Beach Resort is not only about the sun, sea, sands, shore, salt, shells, suds and swells which are typical offerings of many other beach resorts. It offers an extravaganza of birds, sea otters, squirrels, snakes, serpents, swamps and shrubs. Mutiara truly fulfill its promise of "...in the forests, by the bay".

- comfortable bayside cabanas in the forests

- rich and diverse flora and fauna

It is therefore little wonder that one hotel guest remarked that is THE place to rejuvenate one's body, spirit, soul and mind.