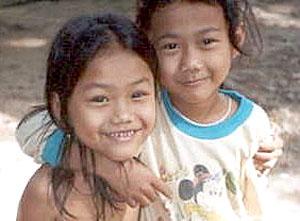 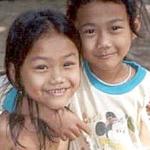 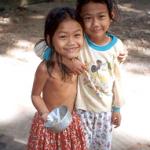 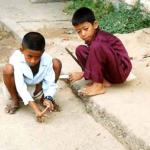 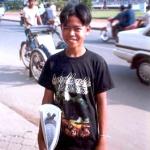 I heard nothing but warnings: Be careful! Watch what you do! Don't go out alone at night! Don't carry large sums of money! Keep your jewelry and credit cards in your room! Don't drink the water!

Granted, most of this advice was of the common sense variety. I like to think I'm pretty careful when I travel, aware that there are certain things to be mindful of no matter where you go. Nevertheless, after being bombarded with all these not-so-subliminal messages, the idea of going to Phnom Penh terrified me. Just the mere mention of Phnom Penh raised alarms among people that I talked to. I was told tales of tourists being robbed, shot and kidnapped. Even reading guidebooks and Internet postings contained stern warnings. The consensus was unanimous: exercise caution when in Phnom Penh.

So naturally I was a bit apprehensive when I reached the Cambodian capital for the first time. Not that I had any desire to be there in the first place, but, as it is often exclaimed, shit happens. I'd gone to Cambodia for what I thought would be a quick four-day tour of the Angkor ruins near Siem Reap. Unfortunately I succumbed to stupidity and managed to lose my passport while out on the town one evening. Thus, I was forced to fly to Phnom Penh and apply for a replacement at the US Embassy. That task proved easy enough but getting out of Cambodia and returning home wasn't nearly so simple. Since my original visa had been in the lost passport, the Cambodian government required that I obtain an exit visa. This process, I soon discovered, was not a quick one and my subtle suggestions about greasing the official's palm didn't help speed up matters whatsoever. I ended up waiting 17 days for the exit visa to be "processed" before being allowed to leave the country. In the meantime, I was stuck in Phnom Penh.

I sat around and felt sorry for myself for all of ten minutes before realizing there wasn't much I could do about my situation. I was still confused why my attempts to speed up the process with a monetary donation had not worked, but now that it was in the hands of bureaucrats all I could do was patiently wait. It also dawned on me that this unexpected detention provided me a great chance to explore Phnom Penh and learn more about the city. Phnom Penh is fairly compact and I was able to explore much of it through a series of long walks. During my first few days in town I saw all of the popular tourist sites: Tuol Sleng prison where the Khmer Rouge tortured prisoners in the late seventies, the equally infamous "Killing Fields" of Choung Ek, the hilltop temple of Wat Phnom, the National Museum, the Silver Pagoda and the Royal Palace. Once the obligatory sightseeing was out of the way, I was content to aimlessly stroll around town, visiting more temples, talking to more monks, photographing more kids in the street and replenishing my reading material at a well-organized used bookstore. Despite my initial trepidation, I was starting to enjoy being in this city.

After decades of enduring sheer hell Phnom Penh seems to be regaining its confidence and its spirit. From American bombings during the Vietnam War to the Khmer Rouge inflicted holocaust in the late 1970s and the occupation of the country by the Vietnamese in the eighties - and we can't forget a coup or two sandwiched in between - Cambodia has not seen true stability until only very recently. But, some would argue, even now things aren't so stable with the Hun Sen regime in charge.

No matter what your take on the political scene, Phnom Penh itself has calmed down considerably, added a new coat of paint - literally - and is eager to host visitors. Yes, the city is starting to show its rejuvenated face, proving that there is life in the dusty streets (or make that "muddy" during the frequent summer rains), avenues that are so hopelessly pitted with bone-jarring potholes that they resemble lunar craters. But no matter what the condition of the pavement, the peripheral activity going on outdoors is what gives the city its vibrancy. Along the picturesque riverfront of Sisowath Quay, colorful flags flap in the wind, children laugh and play, couples saunter by hand-in-hand and fishing boats lazily drift down the river. All over town you can see groups of children playing games of marbles in the streets. Yes, good old-fashioned marbles. Marble mania everywhere! Another kids street game seen everywhere was one that involved kicking your sandals into a designated square, not unlike shuffleboard. I later found out it was called "kop sbek cheung."

While the vibes around Phnom Penh were good there were other pockets of town where you see signs of decay and poverty: old, crumbling buildings, piles of rotting garbage, desperate looking beggars and people maimed by landmines.

Although the city's traffic congestion does not rival that of Bangkok, there is still a good deal of chaos thanks to thousands of motorcycles, bicycles and carts darting about pell-mell. On the few times that I was in a car or on a moto, I found out that there is no such thing as a smooth ride in Phnom Penh. Walking proved to be a better way to see the city, but I sweated so profusely each time that I needed to shower and change my shirt after finishing my stroll. When darkness fell each day my adventurous spirit subsided and I stayed near my hotel, not daring to stray more than a few blocks away for fear that I'd become a mugging victim. Those first few nights I did nothing more than eat dinner in the hotel restaurant, talk to the staff and read books. I was in bed before nine o'clock every night.

After I'd been in Phnom Penh for about five days, my solitary existence came to an end thanks to a British man who showed up with several hundred dollars in unmarked bills for me. Sounds clandestine, but the reality was far from it. The rendezvous had been arranged through a friend of mine in Thailand who also knew the Brit, a friendly fellow named Malcolm who, it turned out, lived and worked in Phnom Penh. At the time of my passport crisis Malcolm had been visiting our mutual friend in Thailand. After I had e-mailed my Bangkok friend for help, he in turn contacted Malcolm and arranged for him to bring me the much-needed money.

Malcolm turned out to be a very congenial host, taking me out for meals and showing me more of Phnom Penh. I gradually began to lose my fear of Phnom Penh at night and I began to explore more of the town on my own. Having a few extra bucks in my pocket also helped to increase my sense of adventure. No longer was I forced to exist on noodle soup and walk everywhere. While I waited for my exit visa to materialize, I continued a daily routine that included meeting Malcolm for coffee each afternoon at a little cafe on Sisovath Quay. Besides being a fine vantage spot for sunrises and sunsets, that riverside area was always full of visual highlights. From our sidewalk seats the passing parade of tourists, beggars, moto drivers and shoeshine boys added to the unique atmosphere of the city.

One of the regulars I saw each day was a boy by the name of Tee who sold newspapers. On my first morning in Phnom Penh I bought a day-old Bangkok Post from him. I was immediately struck by Tee's polite sales pitch and further impressed when he greeted me by name the following day, asking me how I was doing. I ended up buying papers from him every single day I was in town. After I'd finished reading my Bangkok Post I'd give it back to Tee so he could re-sell it to another foreigner. Tee would then reward my recycling efforts by giving me a free copy of the Cambodian Daily. Granted, it was an inexpensive little paper, but I hadn't asked him to do me any favors and seeing as how he was making a pretty meager living selling a little stack of papers each day, his generosity touched me.

The other kids along the riverside were equally as industrious and pleasant to talk to. If they weren't selling papers or asking to shine your shoes, they were collecting cans and bottles or carrying around a set of scales and asking if you wanted to be weighed. It was refreshing to see kids actually trying to earn some money as opposed to just begging for it. And you can be assured there were plenty of those as well. Both adults and kids wandered up and down the riverside, making pitiful pleas for money. It was hard to escape their persistent advances unless you retreated back to your hotel.

As is the case in almost any foreign country, I found that learning a few words in the local language went a long way towards communication. The moto drivers I hired to take me to more distant places around Phnom Penh seemed delighted that I could speak a bit of Khmer. I also think they were also less likely to take advantage of my tourist status and inflate the fare when I negotiated it in Khmer instead of English.

When my coveted exit visa finally materialized, I genuinely felt sad to be leaving Phnom Penh. Though my stay was much longer than I had anticipated, or would have planned, it turned out to be one of those proverbial blessings in disguise.

I can't wait to go back.