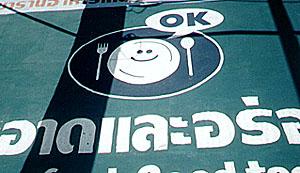 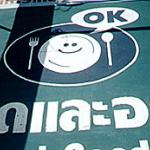 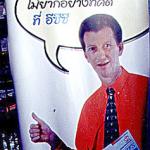 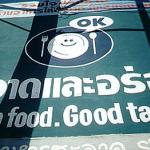 Thaiglish is the putative name for the hybrid language evolving from interactions between Thais and Anglophones. Like any hybrid, it has arisen from a combination of necessity and expediency, and has its proponents and detractors. An EFL teacher might discourage its use in the classroom for reasons pedagogical, but the same teacher might encourage its use in the pub for reasons social. Linguistic purists -- like those cheeky Brits insisting my language is not English, but "American" -- would have it banished; fortunately, purists always lose. In the cause of linguistic impurity, I here essay to sketch some notable characteristics of Thaiglish as if it were a bona fide language. This requires me to distinguish the English spoken by Thais -- Tenglish (pronounced 'tinglish') -- and Thai spoken by Anglophones -- Englithai. Thaiglish is thus the sum of Tenglish and Englithai, and, theoretically, the latter two should grow more similar over time.

No doubt many of the characteristics of Tenglish can be explained by the propensity, when learning a second language, to translate directly from one's native tongue. The common enough Tenglish sentences below are all word-for-word translations:

This last translates in English as "He went", "lairo" being the Thai past tense marker, almost satisfactorily rendered as "already".

Tenglish has only a few tenses, due to colloquial Thai's reliance on only the simple past, present, and future. Because English employs a great many more, Tenglish speakers attempting to use them must all but state their definitions:

While the simple past is most commonly expressed using the markers "already" or "before", it may also be expressed using "used to", as in "I used to go there". In English, "I used to go there" means "I went there, but I don't anymore". But in Tenglish, it means "I went there". This solecism may have resulted from a misunderstanding similar to the case of "already". Rather than memorize the baffling conjugations of English verbs, Tenglish speakers merely use the verbs' infinitive forms and an appropriate tense marker.

Colloquial Thai having no articles, direct translation can also explain the general absence of "a", "an", and "the" in Tenglish, or the indiscriminate use of "the". The lack of declensions in colloquial Thai similarly explains Tenglish's ad hoc plural forms:

The preceding considerations point to one of Tenglish's virtues as a language: it combines colloquial Thai's minimal grammar with English's bountiful vocabulary. Much English grammar is superfluous because of the meaning imported from context, while Thai vocabulary is woefully deficient. Faced with a construction like "I would have liked to have seen it", Thais are liable to faint in distress; while a Thai friend of mine once joked that Thai has five verbs: "gin" (eat, drink), "pai" (go), "mah" (come), "bpen" (is), and "dai" (can).

Thai has already appropriated English vocabulary to a marked degree. (So too, the cheeky Brits might assert, have the "Americans" simplified English grammar.) The following words, appearing fairly regularly in colloquial Thai, are thus indispensable to any viable Tenglish: hello, okay, computer, sexy, motorcycle (or "motorcy"), hot dog, beer, credit, cake, soup, ball, gay, etc. In many cases, foreign words are used when the Thai equivalents are nonexistent or hopelessly unwieldy. As long as the English-speaking world continues to dominate in areas producing the majority of new words -- science, technology, and business -- Thais will sooner use the English word than fabricate an indigenous equivalent.

The pronunciation of such Tenglish words tends to follow Thai pronunciation rules. Final consonants are either hardened ("ball" becomes "bon"), or dropped altogether ("beer" becomes "bee-a"). Final syllables are commonly given a high Thai tone (the "py" of "floppy"). And, as in most Asian languages, "l" is as indiscernible from "r" as "v" is from "w". (Definition of educational futility: Getting a classroom of Thai math students to pronounce "quadrilateral" properly.)

A proper understanding of Englithai, the counterpart of Tenglish, requires a little sociological background. Anglophones in Thailand being predominantly hedonistic ("sex, drugs, and islands", suggested a long-time resident, are their chief reasons for coming), many learn Thai not from trained and sober instructors in classrooms, but from drunks and prostitutes in bars and on beaches. Morally unsullied EFL teachers, on the other hand, learn Thai from their students. In either case, the Thai acquired is bawdy, ingratiating, or immature. "I know the Thai word for ticklish," a friend recently complained, "but not the word for window."

Thai grammar being fairly simple, an average Englithai sentence will have a recognizably Thai structure shot through with English words whose Thai equivalent is beyond the speaker's ken. If my friend wants a window, he might ask "Mee window mai krap?", or "Do you have a window?", emphasizing "window" to inform the listener of its foreignness.

Meaning of individual words in Englithai is determined less by tone than in Thai. Native Thai speakers are increasingly less likely to ridicule an Englithai speaker for saying "sao" in a rising tone (meaning "woman") instead of in a high tone (meaning "sad"). If Thais want to communicate, rather than have a chuckle over the foreigner's gaff, they will trouble themselves to distinguish words using contextual clues.

Now may be seen the form a true Thaiglish might take. Clearly it will owe more to Thai than to English. This is simply a matter of numerical supremacy: most interactions between Thais and Anglophones take place in Thailand. But expediency, simplicity, and the never-ending quest for amusement will determine the language from which Thaiglish draws its various components. Thai grammar is simpler, English vocabulary is more flexible and "up-to-date"; both are more suited to the pace of modern times. On the other hand, Thaiglish will retain Thai pronunciation, tonality, and question tags, because they are more amusing.

Which is to say: The Thai pronounce and tone and question word is in the Thaiglish later, pror wah I think that it sa-nook kwah, na?