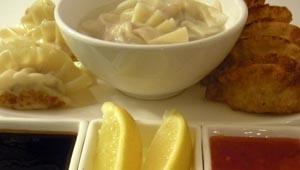 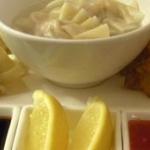 Combine scallions, celery, garlic, and ginger and stir to uniformly mix. Divide the chopped vegetables into three equal portions and mix one portion with each of the three fillings.

To prepare dumplings, rub the edges of each wonton wrapper with water, place about a teaspoon of filling in the center, fold in half and pinch the edges to seal.

For Fried Shrimp Dumplings
In wok or a large skillet, heat about 2" of vegetable oil to sizzling temperature. Carefully slip three or four dumplings into the oil one at a time. Do not overfill the wok. Fry until golden brown on both sides, turning once. Remove dumplings from the oil and drain on paper towels. Repeat with remaining dumplings. Serve with Sweet Chili Sauce.

For Chicken Potstickers:
In a wok or a large skillet, heat about 2 tablespoons of vegetable oil over medium heat. Add dumplings with the folded edge flattened out on the bottom and the pleated edge upright. Cover and allow to fry for about 5 minutes, until the bottoms are golden brown. Add about ¼ cup of water or stock to the pan, Cover and allow to steam for 5 to 7 minutes. Remove from the pan and serve immediately.

Bring Supreme Broth to a simmer. Add pork dumplings and continue simmering for about 10 minutes, until dumplings are tender and filling is done all the way through. Transfer to soup bowls and serve with lemon wedges.

Combine all ingredients in a large soup kettle. Bring to a boil, reduce heat to lowest temperature and simmer for about 4 hours, until broth is reduced by half. Remove from heat, allow to cool, and strain through a fine sieve. Refrigerate and skim off the fat before using.