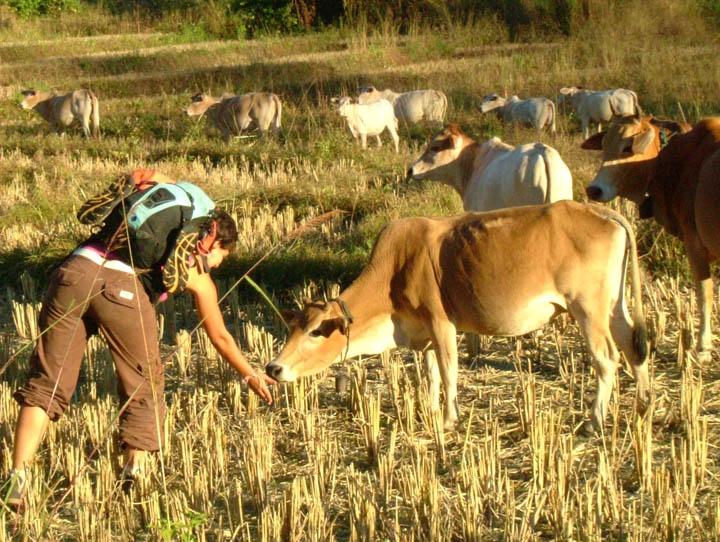 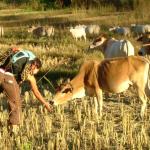 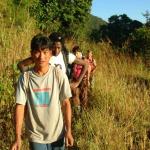 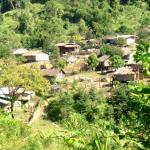 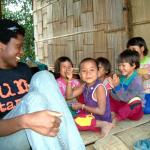 We’re sitting around a fire inside a house of thatched bamboo up in a Lahu village in northern Thailand. Across the leaping flames, the middle-aged medicine man of this village of 100 households is telling our guide why the Lahu do not hunt gibbons.

“A long long time ago, the gibbon used to be human, and the male told his wife that she didn’t have to go fishing every day. ‘Today, you can go to heaven,’ he tells her. But she still goes to the river to go fishing. Afterwards, she comes back to where they live in this tree with a chicken way down below in a coop. This is the tree where everyone comes to get magic. And this magical spray of water sends the chicken flying up to heaven but the woman ends up hanging from the top of the tree. That’s why she ends up as a gibbon.”

The medicine man laughs and lets out a gibbon-like whoop. His teeth are blackened by chewing betel nuts and his face is crinkled with laughter. All of the other trekkers join in with his merriment.

These animistic beliefs that gibbons, elephants and hornbills are sacred have been a boon to northern Thailand in terms of wildlife conservation; and the way the hill-tribes see trees as magical spots has also worked wonders to save the forests from being toothpicked by the grinding jaws of sawmills. But there are less lofty considerations, too.

For trekkers like us out for a walk in the hills, and the chance to meet and stay with some highlanders, such folkloric tales made us feel like kids listening to fairy tales before bedtime. And they did make a fitting end to a day where magic and nature entwined like jungle creepers wrapped around a banyan tree.

Our two-day/one-night trek had begun that morning with a ride in a pick-up truck that threw us around like crash-test dummies as we rocked and rolled our way into the foothills outside Pai, in Mae Hong Son province. At the end of this uphill, dirt-track ski course, slaloming around and over hard-packed moguls, came what looked like a mirage for city-dwellers thirsting for some limitless blue horizons (not ceilings and acoustic tiles); the multi-hued greens of trees and bushes and plants (not the grimy greys of buildings and streets); and air uncontaminated by pollution. (Strangely enough, the ride there and the ride back proved to be the bumpiest and most aggravating parts of the journey.)

Once the trek began, we worked the kinks out of our muscles in a hurry. The trails north of Pai are well marked and not too steep. Pat, our half-Shan and half-Isaan guide, took the front. He wore jeans and a T-shirt. But he had a bright pink bag of hill-tribe pedigree to shoulder his possessions, a bamboo basket on his back to carry our lunch and water, and a machete hanging down from his jeans. From time to time, he used his machete to hack branches overhanging the trail.

The pace was leisurely. And it allowed people to converse as we went. Our crew, like many treks, was eclecticism personified: a young Czech couple, an American anthropologist, a middle-aged musician from Canada, and a black woman and former social worker from England.

For the majority of us, the most captivating moments came when Pat shared the jungle, survival secrets of the hill-tribes. Beside a wide dirt road he knelt down to show us some holes that served as burrows for king cobras. He told us that the locals would wait across the road with their dogs for the snakes to come out at night and feed. Then they would kill them. Just as he was telling us this, another local drove by on a motorcycle, carrying a long, homemade shotgun on his back. This hunter had his sights set on shooting squirrels and small birds, like parrots, for dinner.

(Later that night, the Lahu medicine man in the village of Hua Pai (it’s named after the nearby Pai River) would tell us, “It’s bad luck for anyone over 60 to kill animals but when you’re younger and you have no money and have to feed your family it’s a matter of necessity.”)

Make no bones about it, for many of the impoverished villagers up here, life is a brutal struggle. And anyone considering a trek should be ready to face some hardships and squalor. For outsiders, seeing the tiger on the verge of extinction is sad. But for the Lahu, who had to cage their draught animals under their houses and bring their dogs inside up until 30 years ago, they no longer have to worry about tigers mauling their pets and beasts of burden in the middle of the night.

Winded after a long day of ups and downs, we arrived at a viewpoint overlooking the village, where the houses were arranged in helter-skelter fashion on the opposite hill. Down below a stream zigzagged past. Surviving the day’s travails gave us that feeling of exhilaration that comes hot on the heels of exhaustion.

Some of us went for a bath and swim in the freezing stream. Others frolicked with the village kids. Some snoozed. Others drank coffee or tea. Meanwhile, I and a couple of others sat around conversing, through Pat, with the village’s top three in command: the kamnan (or village leader), the medicine man and the blacksmith.

With these lower-end treks that cost around Bt700 per day, the most common complaints are about sleeping on hard floors, a lack of different activities and not seeing enough displays of traditional culture. These flaws are easy to correct. Simply book a more high-end trek with a wider itinerary.

With the Jungle Thrills in Northern Thailand package, for example, you can enjoy such extras as an elephant-back journey, stopovers at Akha and Lahu villages, rides on an ox-cart and a mountain bicycle. And then you can kick back and relax in the award-winning, beautifully appointed Lisu Lodge. In this lodge in Chiang Mai province, there are nightly performances of Lisu music and dance that show off their Tibetan and Yunnanese origins. Considered one of the six main hill-tribes in Thailand their population numbers around 30,000, as opposed to the Lahu (and their different sub-groups), who are around 100,000-strong.

Most of these treks are suitable for people in average health. And most of the time the fear factor is quite low. (Just beware of what some travel agencies and guides call the “no-mercy treks” when you’d better have a bit of Nepalese sherpa blood in you.)

Quite possibly the most palm-perspiring parts of our trek came on the last day when we had to walk across wet logs over gushing streams. Using our arms for balance it was a little bit like tightrope-walking. But our ever-vigilant guide was there to give everyone a hand, in case they teetered where they should have tottered. And the only accident occurred when one of the Czechs lost his flip-flop while trying to leap from rock to rock. Fortunately, the anthropologist used a branch to snatch it out of the stream as it swam past.

Every trek has its stagy photo-ops. As we hiked into a white Karen village to get into the truck to head back to Pai, one of the tribeswomen, in full regalia, was standing there with two babies – one in her arms, and one on her back – while smoking a wooden pipe. The bad news is that stage-managed moments like this do seem exploitive. But the good news is that a portion of what each trekker pays goes back to the hill-tribes. So it’s a win-and-lose situation.

On the environmental front, however, are trekking and poaching and illegal logging wreaking havoc on the north’s eco-system? Not so much, said the Lahu medicine man. “There may be a few less animals and birds in the forest and a few less trees, but the thing we’ve noticed the most is the change in temperatures – the hot season is much hotter than it used to be,” he said.
And what of that politically suspect charge of foreigners contaminating the hill-tribes with their Western ways and beliefs and culture?

Smoking tobacco in a dried banana leaf, on the last morning of our visit, as a Thai company was installing the village’s first satellite dish, the medicine man said, “For two years some Christian missionaries had a little house and a sign up advertising their religion in our village, but no one came to see them. We want to stick to our own culture and besides, those other missionary groups were killing gibbons.”