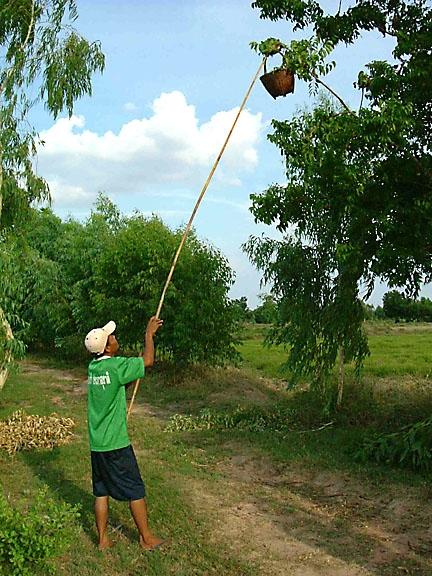 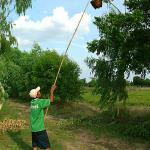 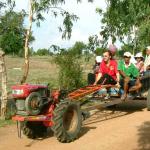 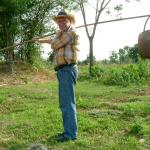 With a long, bamboo pole I’m stabbing at a nest of red ants high up in the branches of a mango tree. As the pole pierces the nest, a few of them rain down on me. They’re huge and they sting my hands and arms with their bites. Where I come from, ants can ruin a picnic by forming a freight train to raid the potato salad. But that’s about it. They do not look like they just crawled in from the set of a sci-fi movie. Nor do they bite.

All I can do is mutter a few obscenities and worry that the whole nest will come tumbling down on my head, the army of ants swarming all over me. I take another stab at the nest. No luck. Sweat is pouring down my face. It stings my eyes like splashes of vinegar. A Thai member of my adopted family yells that Oh is climbing up the tree to try and dislodge the nest.

Between my stabs and the teenager’s pokes, the ant nest comes crashing down a few metres away. Oh jumps down from the tree to pick up the nest and drop it into a bucket of water as ants race up his arms and legs, furiously enacting their revenge. Laughing and wincing, Oh dances around in the dry rice paddy, brushing them off while rubbing the bites.

With this northeastern delicacy drowned in our bucket of water, it’s been a field day for foraging and a lesson in grassroots survival. From a muddy pond nearby, we’d collected palm fronds and tree branches to pick the mussels off them. From the trees we’d cut down a number of ripe mangos with a bamboo pole.

And on the way back to this speck of a village, near the border with Nakhon Ratchasima and Chaiyaphum provinces, I stopped the little gas-powered cart beside another pond, so a couple of the local women could wade in and pluck some water lilies with long stems that would later be cut up and used in a tamarind-flavoured soup.

As many travellers tire of herding with their own kind – playing darts in English pubs, watching Hollywood movies in guesthouses, lounging around the pool at some franchise hotel that could be anywhere or joining the jet-ski set on some generically tropical beach – they are searching for holidays that give them insights they’ll never get on the Discovery Channel or read in any guidebook. How do northeasterners prepare a red ant egg salad? What’s a temple fair out in the boondocks like and how do you dance the ramwong? Which herbs and fruits are safe to eat? Do they really drink rice liquor with scorpions in it? What’s it like to have your fortune told by a Buddhist monk?

These are the kinds of questions you’ll get answers to on a typical homestay in Thailand’s northeastern region of Isaan. Some of the sojourns are now billed as “voluntourism” because you can have a “working holiday” at your own expense. Paying someone else to work sounds crazy, doesn’t it? Not really. The gist of these jobs is to make you forget about your usual one and remember what it’s like to be fully and truly alive – not some zombie zoning out on his computer screen or iPod. If there are few frontiers on earth left to tame, and fewer summits left to surmount, you can still explore the boundaries of your own potential by learning a new way of life.

Maybe you’ll lend a helping hand with the rice harvest. Maybe you’ll help to rebuild houses washed away by the tsunami in southern Thailand. Maybe you’ll apprentice with a silk-weaving artisan or a Thai cook. Possibly, like me, you’ll get the chance to drive the so-called “gas-powered buffalo” with the whole family sitting on the cart in back, down the dirt paths that twist and turn between the rice fields, on an expedition to hunt for red ant nests and gather herbs.

Chief among the different roles you can play on your voluntourism/homestay is English teacher. But it’s unlikely you’ll have to make the grade in a classroom setting. Some classes involve teaching village children. Others are conducted in the field (quite literally) with local tour guides eager to learn the jargon of eco-tourism.

At a grassroots level, homestays and voluntourism are both branches of the eco-tourism tree as both are grounded in the same philosophy of sustainable development, providing benefits for the community, conserving cultural traditions and preserving the environment that nourishes the birds and beasts.

Interfacing with locals is crucial. This is what makes the experience so different from the tourism-as-usual holidays, when the only Thais you’re liable to meet are in the business of serving or pleasuring you because, in a family-oriented country like Thailand, where even friends and waiters are addressed by titles like phi or nong (an older or younger sibling) you’re either a part of the family or just some nobody. To help volunteers hurdle the language barrier and really interact with your host family, a local translator is on hand.

But voluntourism is rarely a case of all work and no sightseeing. Homestays in Isaan, for example, include optional outings to phenomenal, historic sites like the 11th century Khmer temple, Khao Phnom Ruang, perched atop a hill in Buri Ram province. Down south, in villages like Bahn Talae Nok, there’s an even greater assortment of activities to get your adrenaline surfing. Snorkeling, classes in cooking and batik making, rowboat tours of mangrove forests and seeing what lubes the wheels of the local economy by touring oil and palm plantations can all be done in a day.

For those animal sympathizers who want to really heed the call of the wild, there’s no shortage of opportunities to play Dr. Doolittle or Jack London. Up north, it’s possible to become a mahout, or elephant-handler. In fact, you could stay with your own personal tusker, learning all about feeding, bathing and caring for them, not to mention all the commands, for anywhere from a week to a month.

If that doesn’t float your boat, you could stay with a family of fisherfolk and learn the ropes of all the different nets and traps they use for squid, crab, lobster and barracuda to brave the waves, the salty foam and the laser-beam sun on fishing trips with the men.

In the south, you can also stay with a family on their floating fish farm.

On other homestays, the voluntourists assist forest rangers in doing surveys or looking after creatures, mistreated by the tourist trade or wounded by wildlife traffickers. One centre in the province of Prachuap Khiri Khan even has a project up and running to save and study dusky langurs (the primates with the silvery punk hairdos).

As voluntourism makes inroads with the mass media, and picks up in popularity with wandering do-gooders, the field continues to expand. Doctors, nurses, engineers, dentists and sanitation experts are all needed.

For a basic homestay, including the work experience, daytrips and meals, count on spending a minimum of US$80 for three days and two nights. The accommodation may not be too palatial but who cares when your alarm clock is the sound of cowbells tinkling and you open your wooden window to see the sunlight embossing the leaves of a pomegranate tree with a layer of gold… and there’s a dog chasing the ducks… and there’s my adopted granny in her florid sarong, with those betel-nut-rouged teeth, hunkering down over the wok to cook up an omelette with red ant eggs which I personally helped to land.

It’s a Third World away from standing around the water cooler talking about the latest Survivor episode. Why let those out-of-work models and never-will-be actors have all the adventures, when you can script and star in your own?

All right, now it’s your turn to drive the gas-powered buffalo and plunder some ant nests.