Visakha Bucha: The Buddha is Dead, Long Live the Buddha! 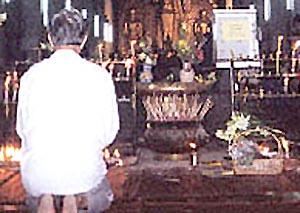 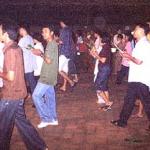 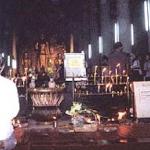 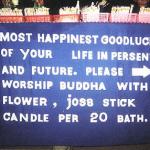 It is a placid, sparkling afternoon here at Thapae Gate, normally among the busiest, most polluted Chiang Mai locales. Forgive the cliche, but the sun is shining and the birds are singing. A mother and son shower a covey of aimlessly determined pigeons with food. A demimondaine and her boyfriend du jour gaze into the moat, whose fountains, rarely audible above the automotive din, send their calming, lily-shaped plumes aloft.

The serenity is fitting, for today is the anniversary of the Buddha's birth, enlightenment, and death: Vesak Day, or Visakha Bucha. Visakha is the 6th lunar month, on whose full moon the holiday occurs. Thus its actual date varies annually, falling this year, 2544 of the Buddhist Era (BE), on 7th May.

On this day, the man named Siddharta Gautama Shakyamuni was born a prince; thirty-five years later to the day, after meditating for seven weeks beneath the Bodhi tree, he attained Nirvana; under the same full moon, at the ripe old age of eighty, he passed away. His many, often conflicting and half-legendary biographies repeat the intervening events. However legendary, he is the inspiration for a religion, unique in its rationalism and atheism, its emphasis on self-reliance, and its tolerance.

The Buddha's fundamental appraisal of life is pessimistic: it is suffering. But he offers an escape: the suffering is caused by desire. Eliminate desire, and suffering ends.

Most people, especially Buddhists, would agree superficially with this simple argument, though not all would agree with the premise. Much of life is not suffering at all, and much suffering is consciously sought. Paraphrasing George Orwell: Most people want to be good, but not completely good, and not all of the time. Instead, to compensate for their suffering, they seek pleasures spawning more suffering. The Buddha invited us to escape this vicious circle. Whether more or less people accept his invitation with each passing day, alas, is questionable, as are some of his message's cringe-inducing spin-offs (a local temple's proverb, for example, exalts "docility").

But in Thailand, as in any Buddhist land, the message prospers. Here, three holidays - Makha Bucha, Asanha Bucha, and Visakha Bucha, the last paramount - commemorate milestones of the Buddha's life: Makha Bucha marks the mysterious assembly of 1350 of his disciples; Asanha Bucha his first sermon.

Come nightfall on these days, Thai Buddhists throng to their local temples. They gather in the ordination hall (bot) for monk-led chanting of scriptures. Then, amidst an impressive cloud of incense smoke, the faithful vien tien, or walk three times clockwise round the ordination hall (bot) or relic chamber (chedi). As they process, their waiing hands hold three burning incense sticks, a lit candle, joss sticks or flowers, and a lotus bud. This circumambulating is said to signify a whirlpool that will transport the participants from hell to Nirvana; the recurring number 3 signifies the Buddha's wisdom, great kindness, and purity.

This year Chiang Mai's grand Wat Chedi Luang drew hundreds, if not thousands, of the devout. Within the bright glow of the full moon, stalls peddling the traditional offerings lined the temple's driveway. The air was steeped with the monks' chanting and the crudely amplified folk songs of beggars and the blind. The procession round the chedi was like Heraclitus' river, as Buddhists, both Thai and foreign, quietly entered and left. On the chedi's opposite sides, worshippers used a pulley system to hoist a canister of water to the chedi's summit to cleanse it.

Silence fell when the monks left the ordination hall en masse and joined the procession, halting to permit their entrance. Walking barefoot, clothed in their wispy saffron robes, the monks, though numbering a hundred or more and representing all ages and ranks, from doddering old men to swift-footed children, processed with nary a sound.

Elsewhere in Chiang Mai, Visakha Bucha's ceremonies take other forms. On the holiday's eve, Thais begin a 9K walk up the mountain Doi Suthep to Wat Phrathat, the city's preeminent temple. Arriving in the early morning hours, they vien tien, honoring the temple's holy relic. At dawn they perform dana, or acts of generosity, by offering food to the temple monks. After paying homage to Buddha images they descend the mountain.

Ceremonies in the same spirit mark Visakha Bucha throughout the Buddhist world. The Burmese care for their Bodhi trees; Indian Buddhists celebrate Buddha Purnima or Buddha Jayanti by abstaining from meat, giving alms to the poor, and displaying paper lanterns and scenes from the Buddhist Jataka tales; the Japanese, celebrating on 8 April, construct shrines to the Buddha and bathe Buddha images; Singaporeans release animals or caged birds; the Sri Lankans decorate their homes with lights and candles. The Thai government has declared Visakha Bucha "National Tree Day" to encourage the much-needed planting of saplings.

Clearly, these variants share two themes: paying homage to the Buddha and practicing the compassion he embodied. Proper celebration of the holiday could require nothing more than feeding, as a family presently does, the fish of Chiang Mai's moat. Well. Call me a sentimentalist. But the inscription commonly found on posts within Thailand's temples - "May Peace Prevail On Earth" - never seemed so apropos. Nor perhaps so far from being realized, 2500 years after the Buddha wished it so.

The folks at 123greetings are celebrating Vesak Day. Check it out.

"Vesak Day is celebrated to commemorate and honor the Birthday of Lord Buddha, the Enlightened One. Rise to the occasion and reach out to all you know with inspirational messages through our pious & free online greetings." . . . 123greetings.com - click here to send a free ecard.