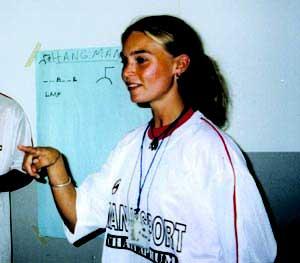 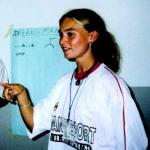 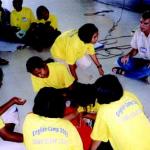 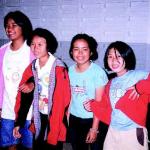 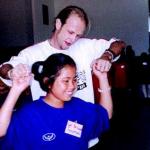 The life of an English teacher in Bangkok is beset with woes like two-hour bus journeys to teach yawning business drones in industrial wastelands. Or trying to teach teenagers with vastly different levels of English, in one of these franchise-style schools, where you have to repeat questions like, "Does Mary make good coffee?" day after day until tedium turns into an intellectual black hole, and you find yourself living in a guesthouse and 'liquidating' every evening in different dens of promiscuity.

But the life of a Volunthai English teacher in the northeast of Thailand is enlivened with weekend language camps in national parks, invitations to eat grilled geckoes and drink rice wine at 10am, riding water buffaloes, signing autographs for the students, and being asked whether you know Leonardo DiCaprio. If you can handle the hordes of screaming, kinetic adolescents, as well as communal living, a pauper's ransom of a salary, and having the locals put on an Eagles' CD every time you walk into a bar, then you should send in an application.

Many of the impoverished youngsters who come to these two-and-half-day camps have rarely seen a farang (white person) before, let alone spoken to one. For them, the experience (filled with songs, games, skits, and even a brief disco) is akin to American kids going off to summer camp, claims PJ Fleig, a 27-year-old teacher from New York. "Except that the kids are much more respectful towards their teachers here. And the thing that surprises me the most is how poor most of them are, but they're just so happy all the time." In comparison to the jobs he's had back in the US, like a stint working with the mentally ill, PJ says that, thanks to his students, he's never felt "more appreciated".

The nine Thai teachers from different schools, who brought 160 of their charges to a recent camp in a pastoral part of Chaiyaphum province (big local event? The Straw Bird Festival), also learn a lot of valuable activities to implement in their own classes. Khomkrit Raksombat, 50, believes that these weekend retreats are the most effective way for students to learn English, largely because their regular classes consist of local teachers explaining the A, B, C's of spelling and English grammar in Thai, while the young learners receive very little speaking or listening practise.

Without a proper grounding in the world's lingua franca, the chances of any of these students gaining admission to a decent university are scant, and the possibility that they'll end up slaving away in some Bangkok sweatshop or brothel looms large.

The Thai education system frequently comes under fire for its reliance on rote learning and inability to get the students to think for themselves. But once these strictures are removed at the Volunthai camps, the students (who are between the ages of 12 and 19) respond with bursts of creative enthusiasm - particularly during the English skits that they perform based on Thai folktales, says Andy Rose, a 25-year-old native son of Kansas.

"One of them is kinda like Pandora's box. It's about an old hermit who gives this guy a box and tells him not to open it until he gets home. But he stops to open it in the forest and a beautiful woman pops out. She wants to be his wife, and then a thief encounters them both. There's a big fight scene and I think the hero ends up dying.

"We try to get the students to make 'em funny and stuff, so they change the endings. One time, the girl comes out and she's real ugly, so the thief and the guy are about to fight, and then they see her and they're like, 'You have her.' 'No, you take her,'" laughs Andy, and adds that in another version of the folktale the two male characters pretended to be gay and walked off together.

As for the most bizarre student-and-teacher encounter he's experienced, Andy mentions a teenage girl, obsessed with Harry Potter novels, and who has phenomenal English skills. She asked him what he'd do if he had magical powers? "So I gave her a real nice answer, you know, I'd stop war and eradicate poverty. Then I asked her the same question, and she said, 'I'd kill all the people and animals, destroy the earth, and turn the universe into a void.'"

PJ often marvels at his students' natural artistic gifts, which manifest themselves during the ice-breaking activities at the start of each camp, when the students are put into different groups, and have to give their squad an English name, elect a leader, make a costume for him or her, and then come up with their own special dance. "The kind of costumes these kids can invent with just some flowers and branches and a few scraps of paper really blows me away. It just goes to show how they can make do with so little."

Another activity that brings out the artistic abilities in their students is the make-your-own-monster game, designed to practice the names of different body parts. At the camp in Chaiyaphum held in late 2002, a group of PJ's students dubbed their paper Frankenstein, "Britney Sperm".

The founder of Volunthai is Michael Anderson. After graduating a couple of years ago with a bachelor's degree in Asian Studies, Michael spent several months backpacking in Thailand, and then a longer spell as a volunteer English teacher in the northeast. An article he wrote for The Washington Post about these experiences attracted the attention of the Keenan Institute in North Carolina; and they agreed to sponsor the programme. The big advantage of Volunthai over programmes like the Peace Corps is that within a couple of days of passing a phone interview with Michael, you can be out in Isaan observing some of the classes.

This year, Michael says Volunthai will be running camps every weekend. They're also hoping to expand their sphere of influence into other parts of Isaan and Chiang Mai. Anyone who's interested in applying can contact him at volunthai@yahoo.com. Or just look around for their ads at various Khaosan Road guesthouses in Bangkok. Ordinarily, he prefers younger teachers in the 20-27 age group with a little teaching experience (though it's not essential), and expects a minimum commitment of a month.

Part of the allure of teaching in a region where only about three percent of the tourists visiting Thailand dare to tread is being treated like "a mini-celebrity", says Luke Jones-Dowling. "I'm not used to it, because back in England I'm just another guy. But here, you've got these stunning women looking at you all the time."

And didn't he tell me something about being able to approach any of them and get their phone numbers?

"No, I'm gay," says Luke with a hearty laugh. "Yeah, I've got some phone numbers, but it's a bit difficult to base a relationship on sign language. People in Isaan don't speak much English."

Other than getting the students to overcome their shyness, the main difficulty for teachers such as Luke is learning how to play the camp jester. "At first, I thought I'm too cool to do the 'Banana Dance' but you get into it because the students are so enthusiastic.'"

Andy's claim that the teachers from the northeast are the most extroverted and fun-obsessed of all the teachers he's met in Thailand is bolstered by a little get-together after the first day of the Chaiyaphum camp. While the female teachers keep refilling everyone's glass with rice wine, Professor Khomkrit (did I mention he's 50?) regales everyone with a risque, bilingual joke involving sex, golf, and a case of mistaken orifices. But the joke is delivered with such boyish enthusiasm, in between fits of hysterical laughter, that even the conductor of the Mormon Tabernacle Choir would find it difficult to feel offended.

Thanks to Michael's contacts, and meeting so many Thai instructors, many of the volunteer teachers, like Sophia Cottman and her boyfriend Jay Richardson (who tended bar in Goa before coming here), have been getting offers of paid employment, and teach private students on the side. Or Jay and Luke do some Eagles-free, acoustic-guitar jams down at their local Irish Pub in Korat, near Volunthai's big communal house, for free beer. (Reminder to Jay and Luke: Have you guys figured out the correct chords for "Layla" yet?)

Sophia is enthused about having classes of regular students, unlike at the camps where it's impossible to do any follow-up activities, because the Swede finds the most rewarding part of teaching is when the students can remember and use what she's taught them.

Like every English teacher, airhostess, or waiter, Jay does get tired of having to be so polite and happy-faced over the course of what can be a very long weekend. But to blow off a little steam once it's over, "We'll sometimes have a swearing contest in the van," laughs Jay, who must be the only English teacher I've ever encountered in either Asia or Europe with multiple ear-rings, a nose ring, and a pony tail.

At the end of each camp, there's a real outpouring of emotion, says Ae, a facilitator and translator for Volunthai. "One student comes up from every group to speak. Sometimes they read things like, 'Thank you for making my dreams come true, because I never have chance to meet farang people before.' And some of the teachers cry."

Luke claims that he hasn't cried yet, "but maybe I'm just more cynical than the rest of them."

Then the students all want their pictures taken with the teachers, and have them autograph everything from footballs to T-shirts.

How much English anyone can learn in two-and-a-half days is not really important, because many of the foreign instructors reiterated the same sentiment: Volunthai is helping to break down some of the stereotypes of Westerners propagated by Hollywood - or older sisters and brothers who've worked at bars and massage parlours in Bangkok - and to cure some farang-phobic young people of their fear.

PJ of New York, who still hasn't met Leonardo DiCaprio, recalls a Thai teacher speaking at the finale of another camp. "The last line of his speech was, 'Farang will not eat our children.'"

No, but Hannibal Lector might, and he speaks really eloquent English.