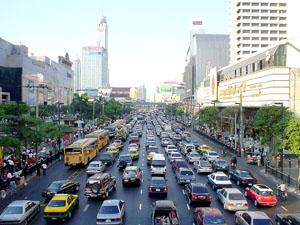 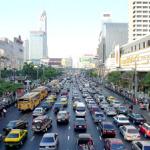 I hope I need not explain why I say that Bangkok is one of the most inauspiciously named cities on Earth, given its somewhat undeserved reputation as the city of sexual indulgence, undeserved because per capita Thailand's sex industry is smaller than America's. Fortunately the Thai name for it, the short version of which is the euphonious Krung Thep, means "city of angels", which can be taken literally or ironically, as you please.

I should say at the outset that I do not care for the city, and have never been able to stay there for more than a few days without developing mild respiratory complaints and a frantic, animalistic need to get out. When I am in a charitable mood I like to say that the only problem with it is that there are far too many people there -- people talking, driving, perspiring, getting in each other's way. And perhaps most importantly, smiling less than do Thais in "the provinces". Living in Bangkok is hard. Hard for the Thais anyway, as a great many expats live like royalty. But the city does consistently rank among the most difficult to live in worldwide.

Still it is also a repository of hope for those Thais unwilling or unable to continue living off the Earth directly or to find a decent job. In fact, just a week or so ago an unemployed and sporadically educated Thai acquaintance of mine was booted out of her apartment, and the first solution that popped into her head was to move to the capital city. As is said of New York, if you can make it there you can make it anywhere, or at least anywhere in Thailand. But in both cases some people make it there only because they have no other choice.

But though I do not like the place, I am intrigued by it, and by those foreigners who not only prefer it but consider the rest of the country to be rather forgettable, and are seldom forced to fully recognize that without the rest of the country they would probably starve to death. But this is a conceit of city dwellers everywhere. And of course it goes both ways, with rural people perhaps not appreciating how much of their life is enriched by the output -- cultural, economic -- of the capital, which may constitute up to 1/6 of the entire country's population.

One of the first things you notice in Bangkok is that in some ways you are closer to New York or Hong Kong than you are to the rest of Thailand. You are connected, globalized -- hip, and even slightly puffed-up. The city hums and radiates. You feel the power of capitalism, of electricity, of the Internet. And if you are fortunate enough to take a taxi from the airport into the city you may even feel the approach of sudden and gruesome death. But this exhilaration has a uniquely Asian character to it, as you gaze at enormous Panasonic televisions showing, say, the porcelain faces of Japanese models pursing their burst-cherry lips, in a way reminiscent of the eerie advertisements in the film Blade Runner, while all around you are noodle stalls, shrines, lepers, grit. The rejuvenated Asia may not be as romantic as the Asia of Conrad or Marco Polo, but it is easily more exciting and -- for a Westerner in a West-dominated world -- sometimes ominous.

On the other hand, there is nothing very exciting or ominous about sitting in traffic for hours, which you are liable to do in Bangkok unless you are wise enough to use the SkyTrain. Ask somebody over a cell phone where they are and as often as not the answer is "a cab". Indeed, the thing that gets to me about the city is what gets to me about many American cities in hot climates, namely that you are almost always either a) sweating or b) within some kind of air-conditioned space, be it a taxi, hotel room, or mall. Rarely is there any in-between. Penguins and claustrophobes would have a tough time of it. And those who manage to enjoy Bangkok are often those who can afford a flat in a high-rise where the winds make air-conditioning unnecessary. (I once watched an Indian woman, on what must have been the 20th floor of one such building, take her exercise by pacing back and forth on her balcony. She resembled one of those toy people that pop out of a clock in a cartoon.) But some people acclimate themselves so thoroughly that they do not even miss electric fans.

There is no question that the city is confining and hazardous. I for one am frequently afraid that I am about to be run over or fall into an uncovered manhole, especially when I have had a few drinks. (See the book The Cars That Ate Bangkok for the literally gory details about the city's appalling traffic disasters, if you are into that kind of thing.)

Obviously it is impossible to generalize about a city so huge, and my experience of it has largely been limited to the places where foreigners tend to go: Sukhumwit Road, Khao San Road, Silom, Siam Square, Chinatown. I have been to Patpong only once. God knows why, unless it was out of a professional obligation to experience everything that is not life-threatening, I sat through a live, lesbian sex show, one of whose participants turned out to be a woman of Slavic features who spoke fluent Thai. Honestly, in respect of Patpong, I did not understand what all the fuss was about; it struck me as simply a smaller but more crowded and menacing version of Pattaya, and once you've seen such things one would hope that you do not need to see them again. I was also surprised to learn that the soi where Patpong is located is almost completely taken up by vendors' stalls: more of the same mind-boggling congestion, herds of enervated strangers grazing in a field of commodities, all buyers or sellers of something, be it sex or a pirated CD.

And sex, of course, and not just of the commercial sort, is the great unmentionable reason why so many male expatriates sing Bangkok's praises, why they seem to be on such a different wavelength from expats elsewhere in the kingdom, and why in many cases they are miserably cynical about Thailand generally. The Bangkok Post occasionally runs letters, I don't why, by some naove foreigner who is outraged (outraged!) that Thai women might be less concerned about true love than about hard cash, and usually one can assume that by Thai women he actually means Thai prostitutes, because they are the only Thai women that would give him the time of day. As it has been throughout history, paying for sex is seen as less shameful than receiving money for it. In any case, such expats seem to remain in Bangkok only to disparage it. Orwell once wrote that disparaging a country's inhabitants was a precondition for living in it comfortably. Call it expatriate Tourette syndrome.

I suppose the answer to the question "Why Bangkok?" is that human beings can adapt to anything that does not kill them outright, though such adaptation may entail becoming completely bananas. But the city does have its charms and curiosities, like the bustling Victorian-style Hua Lompong railway station, the riverfront and the Chao Praya itself, Lumpini Park and the adjacent Night Bazaar, Chuttachuk market, the flagrantly gay Silom Soi 4. I even enjoy sitting in the airport and watching the old-fashioned mechanical departures screen as the letters audibly roll over -- changing, say, Karachi to Taipei. There's some romance in that, surely. And I like riding the SkyTrain, in part because of the contrast between its shiny happy riders and the inhabitants of Bangkok's slums.

Defenders of the city could say that there are city people and country people, and the preferences they have should not be considered as final judgments. Fair enough, and I concede that there are people who are as fond of Bangkok as I am afraid of it. I know some of them, but I also know some -- many from Chiang Mai --- who are there simply to make enough money to move away, either upcountry or abroad. I grew up in a town of 3000 people, so naturally I have an aversion to crowds and noise and pollution, but I have also lived in or near cities -- Chicago, Bombay, and Boston -- where such things were interesting rather than stupefying, where development was either under control or not yet excessive. Bombay, for example, was oddly liberating, because it had not yet been partitioned into air-conditioned enclosures; it was more human than machine, even if remaining human meant being helpless and dirt poor. When I think of Bombay, I think of women in saris standing on a beach and staring out at the Arabian Sea, or of a roving band of musicians playing for money on the street just below my balcony. When I think of Bangkok, I think of taxis and cement.

But as with New York, one of the definite benefits of visiting Bangkok is that though you may be exhausted the entire time you are there because you are so busy trying to see and do everything, you will come away from the experience with a strange energy. Like the energy that hate gives you, it is admittedly a contaminated kind of energy, almost as if all the idling engines of the city were now idling in your brain or in your hands, or as if you had become a jackhammer, a power drill, a loudspeaker.

Like many developing countries, Thailand has an extraordinary capacity for multiplying noise; just when you think you can't take it any more, it gets worse. Friends of mine in Bangkok have told me that it is commonly impossible to sustain a hangover there, so sometimes they are reduced to drinking it off lest they otherwise be driven mad by all the racket. So I suppose being drunk or stoned a fair part of the time is another way many of the city's inhabitants have learned how to adjust. Another is simply to stay inside.

Barring any unforeseen calamity like plague or nuclear war, megalopolises like Bangkok will certainly become the norm, as Asia continues its dramatic and often painful redistribution of the population from the countryside to the cities. (Chances are that a recent arrival to Bangkok, for example, is from Thailand's poor northeast, and there is an almost 100% probability that a Bangkok prostitute is.) Bangkok now has oxygen bars, urinals for use in an unmoving car, and the closest thing you could imagine to drive-thru brothels, whose rooms are sometimes filmed for use as pornography. I am even told that there is a place called Eden, where you can order a custom designed sexual experience, as you might order a sandwich at Subway. You can even have it home-delivered.

While such phenomena are in no way representative of the city, as some writers of bad novels set there might have us believe, that they exist at all is proof that Bangkok is a city of superlatives, of maddening gridlock and homicidal speed, frumpy hookers and Revered Patriarchs, merciless sun and frigid darkness. Even to be there on your best behavior is to feel that you have committed a kind of sin. Or perhaps that you have finally, after a long dull sleep, woken to life.