You Must Not Cry At All: Tuol Sleng and Cambodia's Ruin 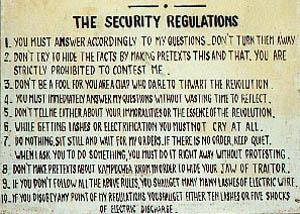 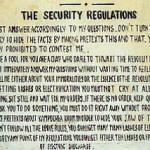 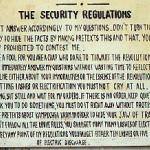 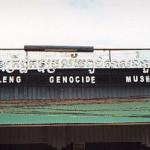 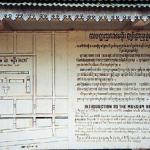 In an effort to draw foreign exchange from tourism, Cambodia tends to popularize its most famous possession, and its most infamous: the ruins of Angkor and the evidence of the Khmer Rouge (KR) purges. Thus, in Phnom Penh, your prospective moto-driver will likely ask you, "You want to go to Killing Field?" Imagine travelling to Europe for the glory of its Gothic cathedrals and being asked, "You want to go to Auschwitz?" Try to rekindle your eagerness for cathedrals.

Cambodia seems genuinely committed to preserving its genocidal history in order not to repeat it. Cambodia also needs to preserve evidence needed to prosecute former KR leaders for war crimes. Most of these leaders deny any responsibility for the 1.7 million deaths under the 1975-1979 KR regime. Instead, they blame Pol Pot and the United States' catastrophic bombing campaign.

One of the first stops on the genocide tour is the Tuol Sleng genocide museum in Phnom Penh. "Tuol Sleng" means "a poisonous hill or a place on a mound to keep those who bear or supply guilt". The KR used Tuol Sleng, formerly a high school, to detain and interrogate people accused of opposing Angkar, or "the organization".

Known to the KR as "S-21", or "Security Office 21", Tuol Sleng held between 1200 and 1500 prisoners at any given time. All were photographed and their exhaustive biographies recorded. Important prisoners were kept shackled individually in cells 0.8 X 2 meters, while the less important were held together in rooms 8 X 6 meters. Though largely Cambodian, the prisoners included other Asians and Westerners, including Americans. The KR exterminated some 16000 prisoners, either during or after their stay.

The compound contains four main buildings: A, B, C, and D. On the ground floor of Building A are a number of identical rooms, each containing a rusted bed frame, a shackle, and various instruments of torture - prods, trowels. On the wall hangs a single faded photograph of some bloody detainee bound to the bed frame. The Vietnamese found these bodies when they invaded Cambodia in 1979.

Hanging outside Building A is a sign containing, in both Khmer and awkward English, the chilling "Security Regulations" for S-21 prisoners. These were posted in every cell:

1. You must answer accordingly to my questions. Do not turn them away. 2. Do not try to hide the facts by making pretexts of this and that. You are strictly prohibited to contest me. 3. Do not be a fool for you are a chap who dares to thwart the revolution. 4. You must immediately answer my questions without wasting time to reflect. 5. Do not tell me either about your immoralities or the revolution. 6. While getting lashes or electrification you must not cry at all. 7. Do nothing. Sit still and wait for my orders. If there is no order, keep quiet. When I ask you to do something. You must do it right away without protesting. 8. Do not make pretexts about Kampuchea Krom [the Cambodian term for ethnic Cambodians living in the south of Vietnam] in order to hide your jaw of traitor. 9. If you do not follow all the above rules, you shall get many lashes of electric wire. 10. If you disobey any point of my regulations you shall get either ten lashes or five shocks of electric discharge.

Building B contains a display of the notorious photographs of the condemned. Among them are children; mothers with newborn babies; young men with terrified, piercing expressions. Most prisoners wear a numbered tag and their hands are bound. While most photographs are straight-on shots, some are profiles, in which some, frighteningly medieval instrument holds the subjects' heads in place. A number of rods stick out of the floor of Building B at regular intervals. These indicate the former boundaries of the small prison cells. In Building C, the cells have been preserved. Shoddy constructions of brick and mortar, they usually contain a shackle and a small bowl for food. Sometimes they contain an ammo case to be used as a toilet. Building C is covered in wire fencing, placed there to prevent desperate prisoners from jumping to their deaths.

In Building D is housed Tuol Sleng's most controversial exhibit, the so-called "skull map". The Vietnamese constructed this map of Cambodia from skulls and bones. Cambodia's rivers are painted blood red. Nearby hang paintings depicting KR soldiers impaling babies on bayonets, and bashing them against trees.

Here, Tuol Sleng's value as historical evidence becomes doubtful. The Vietnamese created the museum, with the help of East Germany, in part to justify the Vietnamese invasion. Two repressive communist regimes, one of which has been Cambodia's mortal enemy for centuries, condemn a communist regime for its repression using paintings, which can easily deceive. One begins to doubt the authenticity of every other form of evidence displayed.

But whoever is ultimately to blame for whatever happened at S-21, the place is unforgettable. Evil and insanity exude from its walls. You hear the barking of the Security Regulations; you feel the "lashes of electric wire"; you try, but ultimately fail to understand how such a thing happened, and how it happens still -- in Yugoslavia, in Rwanda.

In his book Sideshow, William Shawcross makes a strong case for tracing Cambodia's horrific recent history to its bombing and invasion by the Nixon administration. Prior to this, Cambodia was a neutral, relatively peaceful nation. Shawcross suggests that America's "use of air power constitutes a prima-facie case of breach of international law." Journalist Christopher Hitchens has recently taken up this argument in his The Trial of Henry Kissinger. Kissinger, he suggests, is a war criminal.

The Charter of the International Military Tribunal defines "war crimes" to include "devastation not justified by military necessity." The usual justification for the invasion and bombing of Cambodia was the protection of American troops in Vietnam. But the Vietnam War officially ended on January 27, 1973, removing any military necessity for the bombing of Cambodia. The bombing nevertheless persisted, and indeed escalated, through August 15. During this interval over 250,000 tons of bombs were dropped, almost half the total tonnage dropped since the initial B-52 raids of 1969. In total, the bombing killed 100,000 civilians. Farmers fled to Phnom Penh, abandoning their rice paddies and giving rise to food shortages. Meanwhile, the American military presence led to rampant inflation and the effective collapse of the Cambodian economy. These miseries hardened the resolve and increased the membership of the KR, which barely existed before American intervention began.

To argue that Kissinger is a war criminal is not necessarily to forgive the crimes of the KR. But while the world community tries to throw the KR cadre in jail, it reveres Kissinger. The Nobel Committee gave him the Peace Prize; people praise his memoirs; talk-show hosts swallow his foreign policy advice. No such amnesia is afforded the KR. "An American woman came to interview me," said former KR member Ke Pauk in a recent Phnom Penh Post interview. She asked him, "'How did you recognize the enemy?' I told her that while the Americans bombed Cambodia for 200 days and nights, we knew the Americans were the enemy." In the same edition, former KR second-in-command Nuon Chea said:

Many people were killed during the war, the 300 days and nights of the B-52 bombings, then during the Vietnamese occupation....Why do we only talk about Tuol Sleng?....They died from diseases, illness, starvation....The people of Cambodia like peace, independence. They never started a war. They never invaded other countries but other countries invade [Cambodia].

There is a world of difference between a Holocaust denial and a Holocaust etiology. Many people now attribute Hitler's rise to power to the Draconian Treaty of Versailles, but almost nobody attributes Pol Pot's to the United States murderous bombing of Cambodia. This for two reasons: America desperately wants to forget about its involvement in Indochina; and America is the most powerful country in the world. America can forget whatever it pleases.

Standing on a street in Phnom Penh, I am assailed by moto-drivers, asking me where I am going. I say that I am going to Tuol Sleng. One asks me where I am from. I say that I am from the US, but the driver does not understand. I say "America," and he immediately produces the customary response. "Oh," he says, "America!" Giving me an effusive thumbs-up, he says, "America number one!"