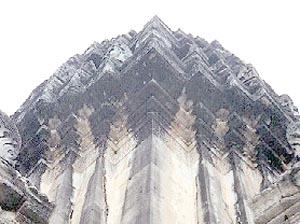 The Central Tower From Below. Phimai, Thailand. 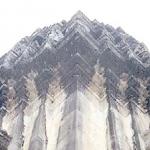 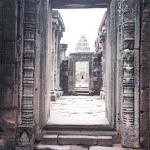 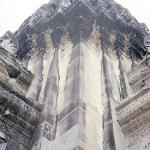 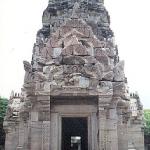 At its height, the Khmer Empire encompassed most of Indochina and Thailand. Although Siam threw off the Khmer yoke through repeated invasions in the 13th and 14th centuries, it continues to bear the stamp of Khmer architecture. Thailand's northeastern region of Isan contains over 200 Khmer sanctuaries. The largest and most important of these is Phimai, 62km from the city of Nakhon Ratchasima, a.k.a. Korat.

Predating Angkor Wat (1150), Phimai was begun under Suryavarman I (1002-1049), the most expansionist king. It was completed under the reign of Jayavarman VII, the empire's last and most prolific builder. Suryavarman was Hindu, Jayavarman Buddhist. So, much like the temples of Angkor, Phimai records in stone the empire's religious evolution.

The sanctuary was the focal point of the city of Phimai, a walled rectangle 565 meters by 1,030 meters situated between the Mun and Chakarat rivers. While most Khmer structures face east, the longer axis of Phimai City and the axis of Phimai's chief tower face 20 degrees east of south. Thus, it points to Angkor, the capital of the Khmer Empire on-and-off for over 500 years. The two cities were once joined by a 300-km road that connected Angkor with Buriram, Chaiyaphum, and Lampang.

Phimai Sanctuary is known to Thais as prasat hin phimai, or "castle stone phimai". The "stone" includes red and white sandstone, laterite, and brick, with combinations of these sometimes appearing in one structure. As for the word "phimai", it is a cognate of "vimaya". This word, roughly translated as "heaven", is inscribed on the southern doorframe of the sanctuary's inner wall, and acts as a dedication to the Buddha Vimaya. Inscriptions nearby record the construction of sacred images, the establishment of the city and its boundaries, reservoir excavation, offerings of food and servants, and the names of kings and high nobility.

A traveler to Phimai from the south would have probably traveled either by the road from Angkor or by boat on the Khem Stream. Near their intersection is a cruciform laterite structure believed to have been Phimai's landing pier. Passing a rishi's quarters and a small hospital or dispensary, the road continues to Victory Gate, the entrance to Phimai city.

Within the city wall is the sanctuary's outer wall. Just outside it stands a rectangular "dressing room" (the equivalent of a Thai wat's sala), where nobles and officiants are thought to have prepared for religious ceremonies. The sanctuary's entrance is fronted by a cruciform bridge guarded by seven-headed nagas and sitting singhs.

The sanctuary's outer wall is breached by four gopuras, or arched gateways, at the four cardinal compass points. The outer wall is connected to the inner wall, or gallery, by a raised passageway. On either side are two of the sanctuary's four reservoirs, now empty. In Khmer architecture, the four reservoirs are said to correspond to "the" four holy rivers of India (although which four is by no means clear). The four reservoirs were used separately by the king, his concubines, manservants, and womanservants. The reservoirs' waters were also poured on sacred images as an oblation, a ceremony in which the city's population participated.

Contained by the gallery is the inner courtyard, the sanctuary proper. This contains three towers. The main tower, built of white sandstone during the 11th and 12th centuries, features garuda caryatids, antefixes of hooded serpents, and a lotus-bulb filial. Bas-reliefs and lintels depict dancing Sivas, scenes from the Ramayana and the Buddha's life. The tower formerly housed the most important Buddha image under Phimai's jurisdiction.

The other two towers were built in the 13th century, one of laterite, the other of red sandstone. The laterite tower was built under Jayavarman's reign, and formerly contained a resplendent sculpture of the seated king. This has since been removed to the National Museum in Bangkok.

When the Khmer Empire began to crumble in the mid-14th century, Phimai began to crumble as well. But between 1964 and 1969, the Thai Fine Arts Department and the French government under took major restoration of the temple. Phimai Historical Park was officially opened ten years later. The park includes a national museum, a gift shop, and captivating photographs of the pre-restoration ruins.

From the ruins of Angkor, of course, one could learn just about all there is to learn about Khmer architecture. But their size and scope can be daunting, as can the trip to Cambodia. Phimai is a kind of Khmer Architecture 101, or, if you will, Angkor Lite.