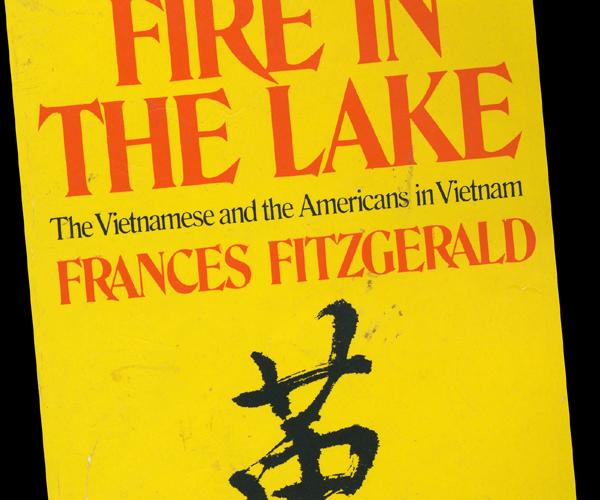 Frances Fitzgerald's Fire in the Lake 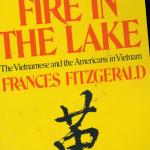 Sauntering around Thailand I sometimes experience a sudden and overwhelming feeling of deja vu. Bars with names like "Heaven Beach" or "Up 2 U" are playing Jimi Hendrix or Credence Clearwater Revival. The streets are thronged with burly white men leading giggly Asian girls toward hotels offering convenient hourly rates. An American-made helicopter or jet flies idly overhead, and in the distance is a beach lined with palm trees. Any second I expect the scene to become a veritable volcano of napalm while Jim Morrison croons, "This is the end...."

I find no consolation in the idea that what's past is past, and not only because it is a tautology. Jesus Christ is past, yet 59% of Americans believe that the Book of Revelation will come true. And recently a representative of the Iraqi embassy in Thailand wrote a letter to the Bangkok Post in which he cited the Vietnam War as a reason why America, and not Iraq, is a "cancer". He neglected to mention that napalm and Agent Orange are weapons of mass destruction, which the United States was wise enough to use on the Vietnamese rather than on its "own" people. The only thing new under the sun is our amnesia of the old.

In 1972, American Frances Fitzgerald published Fire in the Lake, which the paper of record called "the best book on Vietnam" and a reviewer for the New York Review of Books called "the first book I would recommend to anyone to read on Vietnam". In both cases, of course, "Vietnam" does not refer to a country. Rather it acts as a belittling synecdoche for the Vietnam War, itself something of a misnomer. The war was undeclared, and in theory it was not a war against the Vietnamese people so much as a war against an idea - Communism - or against two nations attached to a perversion of it - China and the Soviet Union. The war was also the death knell of Manifest Destiny. "The drive to conquest and expansion," says Fitzgerald, "was never contradicted in America by physical boundaries or by the persistence of strong traditions." Nor, arguably, is it today. But the Vietnam War was Asia's way of saying, "This far and no further."

Fitzgerald observes that America's attitude toward the Vietnamese was similar to its attitude toward the Native Americans - not surprising, perhaps, given their common Asian roots. Indeed "American officers liked to call the area outside [South Vietnamese] control 'Indian country.'" The Vietnamese were seen as savage, subhuman, vermin. Therefore, the Americans were not soldiers but exterminators. "According to official rhetoric," writes Fitzgerald, "the Viet Cong did not live in places, they 'infested areas'; to 'clean them out' the American forces went on 'sweep and clear' operations or moved all the villagers into refugee camps in order to 'sanitize the area.' Westmoreland spoke of the NLF as 'termites.'"

This same demeaning rhetoric is now employed with regard to terrorists: wily prairie dogs to be "smoked out of their holes" or tubers to be "rooted out". And in case you were wondering, "root out" comes from Deuteronomy in the King James Version, and therefore has a special resonance with that American majority cheerfully awaiting the Rapture.

Much of the lunacy of the Vietnam War can be attributed to the ignorant assumption that the Vietnamese would gladly die to establish a democracy, that American political values are universally admired. To the average Vietnamese the ideal state is administered along Taoist lines by an elusive but capable leader who tries to keep his subjects in a happy state of unanimity. "Marxism-Leninism," says Fitzgerald, "accorded to a surprising degree with traditional Vietnamese notions of government and society."

From this standpoint, democracy is confusion; freedom is antisocial; and elections are admissions of incompetence. To win support back home, the Americans tried to make the government of South Vietnam appear more democratic than it was, or could be. One American went so far as to write an article entitled, helplessly, "Vietnam's Democratic One-Man Rule." Though not democratic as such, the National Liberation Front had far more popular support, and would have won any truly free election. And that, in a nutshell, is why it triumphed.

Arguably every country believes in its own innocence, but the contrast between America's deeds and its self-image sometimes approaches the neurotic. When the My Lai massacre was exposed, "a poll taken in St. Louis at the time...showed that only 12 percent of those who had heard the story said they believed it to be true." This is astonishing, even accounting for that 59% that gets its facts from the Bible.

America also insists on reducing all struggles to struggles between two sides. In Vietnam, it was South vs. North, Buddhists vs. Catholics, or Communists vs. non-Communists. This last, writes Fitzgerald, "made as much sense as an attempt to polarize the American people between Southerners and Catholics." She also reminds us that North and South Vietnam were essentially fictions, created by the Geneva Conference to which America, in any case, did not give its consent. And Vietnam was a fiction created by Ho Chi Minh out of the wreckage of the French occupation. "The Vietnam War was not a civil war," Fitzgerald hardly need repeat, "it was a revolutionary war."

Though some Americans are willing to admit that America lost the war and laid waste to Vietnam, some continue to argue that the war could have been won, or that by pulling out of Vietnam the United States did the country a disservice. The first point is moot, and one wonders what winning the war would have implied: a permanent American occupational force like those remaining in Korea and Japan, as well as decades of American aid to help simulate the "miracle" expected of a capitalist economy. (Indeed, some wry Vietnamese dialectical materialists believed that America prolonged the war "in order to maintain a market for their surplus production.")

As to the second point, Fitzgerald argues thus: Originally, the United States sold the war as the legitimate defense of a sovereign nation against aggression by its northern neighbor. But South Vietnamese sovereignty too often proved to be a nuisance rather than an asset, so the United States assumed more and more control over the conduct of the war. In general, the South Vietnamese took this to mean that the Americans were now their leaders, and they developed an unhealthy dependence on American aid and influence. "Many Vietnamese," says Fitzgerald, "saw [the Americans] merely as the producers of garbage from which they could build houses."

But the aid warped their agrarian country into a military and service economy, and American herbicides "ultimately stripped an area the size of Massachusetts of crops and vegetation." Naturally the South Vietnamese were angry when the aid stopped. They were every bit as angry as an addict deprived of a drug that had been pushed on him. The Americans did Vietnam a disservice by invading it in the first place, and would have wrecked it all the more had they stayed.

Being a war against an idea, and not explicitly a war for territory or resources, the Vietnam War could have been won only by eradicating everyone holding that idea, and indeed everyone who could hold that idea. Because non-Communists and Communists were practically impossible to distinguish from each other, the American military commanders increasingly erred on the side of overkill, and indeed used "kill ratios" as a measure of success. "Their course of action," says Fitzgerald, "was indistinguishable from [genocide]."

As many people have noted, there are superficial similarities between the war on Communism and the so-called war on terrorism. What's past is past, but it is also, uncannily, the present. Both wars involve:

* increases in defense spending and restrictions on civil liberties in the pursuit of ill-defined goals;

* killing people merely for being "suspected" of involvement in some worldwide anti-American conspiracy;

* arming dodgy and impoverished proxies without regard for future negative consequences;

* rapprochements between the US and the leadership of countries backing the enemy: Nixon, says Fitzgerald, "with one hand engaged in peaceful negotiations with" China and the USSR "and with the other condemned thousands of Americans and Indochinese to die for the principle of anti-Communism";

* official suppression of underlying causes: both wars are primarily about securing the world's dwindling supplies in the context of skyrocketing demand.

The value of a human life is measured in dollars: this is utilitarianism at its most morally repugnant.

Happily, there are still people capable of good old righteous indignation. Fitzgerald is one, and she is angry in the most effective way. Her anger is held back by arguments, like a rabid dog held back by the bars of a cage. No wonder the book won the Pulitzer Prize and the National Book Award, and has reappeared 30 years after its original publication and 27 years after the end of the war. The war, by the way, that Fitzgerald calls "an overwhelming atrocity" followed by the chaos of "what Westerners blithely call modernization."

Unhappily, and I hope this goes without saying, the book-reading population in America is slowly dying off, or tuning in, or whatever. And though it is certainly possible to be disgusted by an image on a screen, it is entirely impossible to argue with one. Surely, this is the end, my only friend.

Review of Frances Fitzgerald's Fire in the Lake: The Vietnamese and the Americans in Vietnam, Back Bay Books, 2002.