Confessions of a Chiang Mai Barfly 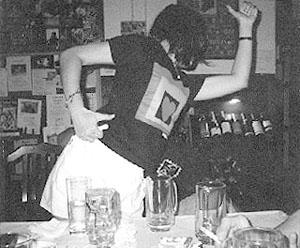 Chiang Mai's Irish Pub is the kind of place where you just might take part in a dance party with the waitstaff after closing time. 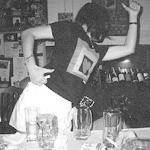 Drinking alcohol is, of course, a loathsome vice, and all right-thinking and up-standing people shun John Barleycorn lest morals break down and the world "plunge into ruin" - to borrow the Bhagavad Gita's phrase. But when thinking right and standing up become, respectively, tiresome and tiring, and you are lonely or your so-called "life" water-thin, the grottoes of the world can always be counted on to serve up a cup of bonhomie and cheer and to offer a "g'day mate" or a "'ello, love."

In Chiang Mai, watering holes are varied and plentiful - arguably too plentiful, and this leads inevitably to moral.... But not inevitably. In a menu of a Chiang Mai restaurant - name withheld to protect the guilty - there is a syllogism along these lines: "He who drinks, goes to sleep. He who sleeps, does not sin. He who does not sin, goes to heaven. So let's drink and go to heaven!" Logically valid, perhaps, but only shakily true (especially in that first premise), but not without resonance for those able to recall that Hitler and other murderous fanatics have forsworn drink. Coincidence? I think not: absolutism is at the root of fanaticism, and there's no telling what the continuously wound-up will do.

There are, roughly speaking, five categories of bars in Chiang Mai. These are the farang bar, the Thai bar, the country bar, the yadong bar, and the girlie bar.

Of the girlie bar, nothing need be said except "proceed with caution if not alarm", while a yadong bar is generally favored only by devotees of the narcotic Thai drink yadong.

A farang bar is owned wholly or in part by a foreigner, and its customers are largely, but not wholly, farangs. A Thai in one of these places will usually speak passable English and have many a farang friend. Western food is offered, as well as the full array of cocktails and Western beers and wines. You may also expect to see a television displaying a bunch of Englishmen running around on a big field as they frantically try to kick a ball into a net, or prevent others from doing likewise.

A Thai bar is Thai-owned and Thai-patronized, and a foreigner might be thought a little odd for coming to one. Expect beer, whisky, and food all to be Thai. Requests for cocktails may be met with confused stares, as will, sometimes, the more esoteric components of the English language.

A country bar is also Thai, but it is usually a huge restaurant on the outskirts of the city, and is known chiefly for its live musical performances of traditional northern Thai songs (hence "country"), and for its lively, whisky-swilling Thai crowds. Not to be missed.

Now that these categories have been set forth, it may come as a surprise that some of my favorite bars in Chiang Mai do not fit any of these categories. This for good reason. If, like the Englishmen in Orwell's Burmese Days, you have come to a foreign land with the express intention of hanging out only with your own kind - then, my condolences. You have been born in the wrong century. The same goes equally well for Thais hanging out with Thais. Together, these two groups constitute much of the barhopping public, but they are not interesting.

My favorite bar in Chiang Mai is probably Mao Dok Mai, or the Drunken Flower. Though it is owned and managed by two jovial Thais, its clientele is pretty evenly split between Thais and farangs, and also pretty well integrated. As an added bonus, it draws just about everybody who is anybody on the Chiang Mai scene. Publishers, writers, teachers, artists, musicians - all will be found in abundance. The music is good and current, the food decent if somewhat eccentric. Live performances are common, and every eminent holiday is duly celebrated with a party.

Running a close second in my bar book is the UN-Irish Pub, formerly the Irish Pub, as it is still informally known. This bar on Ratwithi Road is not particularly Irish - Guinness is served in a can, and the main barman is an Australian - but there is something unique about it, je ne sais quoi. Humility, I think. It does not pretend to be more than it is: a pub. Because it has a core clientele of old ex-pats and fairly worldly Thais, as well as a constantly shifting group of young backpackers, you are just as likely to meet someone new as to catch up with someone familiar. It's also the kind of place where you just might take part in a dance party with the waitstaff after closing time.

Third on my list is Kafe on Moon Muang Road, just around the corner from the Irish. Like the Drunken Flower, Kafe is Thai-owned but multicultural in clientele. What sets it apart is its atmosphere - smoke-filled, slightly (as the English say) "dodgy" - and its music, which is often jazz or blues. (As an American, I start to get the shakes without a regular dose of African-American music.) A bunch of Thai ladies and gents sit perennially at the bar - I am told they are Mafiosos. There used to be a farang gentleman, who looked to be about 90, and who would totter into the bar with his Thai wife and together they would sip soft drinks in complete silence. The essence of cool.

Bars on the short list: the artsy Monkey Club off Nimmenhamin, where I once had my portrait drawn in 15 minutes by a diligent Chiang Mai University arts student; and the hip and hopping joints Good View, Riverside, and Cottage on the banks of the Mae Ping. The older traveler might enjoy The Pub off Huay Kaew Road: it was apparently one of Chiang Mai's first bars, and once thought to be among the world's best. Those of the younger, dreadlocks-and-weed persuasion flock to the Rasta bar off Ratwithi. Personally, I find the Rasta cloying, but I don't have dreadlocks and I don't smoke weed.

Bars in Chiang Mai come and go, but the ones I have mentioned have survived, for whatever reasons. Perhaps it is that they fit the bill for a "public house" - root of the word "pub" - where private cares and worries are not yours alone to bear, a place at once a home and the whole world.