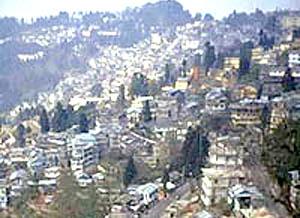 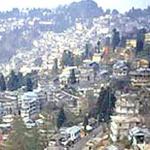 An elderly Indian lady, who introduced herself as Kessum, took a fistful of tea leaves and put her hand to her mouth. She blew hard into her closed fist three times. Then she opened her palm and held it under my nose, beckoning me to smell the leaves warmed by her breath. I hesitated. After all, the thought of smelling a stranger's breathe did not seem too appealing. But this was pure Darjeeling First Flush Super Fine Tippy Golden Flowery Orange Pekoe that she was asking me to sniff. Expensive stuff that's exported as top-end tea brands, blended with other teas, and re-sold as Darjeeling Tea. So I sniffed. The dried, blackish leaves had a delicate fragrance; almost like a mild perfume and none of the sharpness other teas seem to have.

This introduction into the classy Darjeeling tea occurred in the elderly lady's tea shop. Kessum's tea shop is located at the Happy Valley Tea Estate, set up in 1854 by the British in Darjeeling, in northeastern India. The tea trees, now 150 years old, were brought in by ancient traders from China hundreds of years ago.

As part of our tea education program here, Kessum proceeded to brew us some First Flush tea. First flush refers to the first picking, which is in spring. Subsequent pickings yield lesser grades of tea - evident from the harsher aromas released when subjected to the "breathe and smell" test. My travel companion and I sipped the tea, swirling the golden liquid around in our mouths before swallowing, each taste bud heightened to its clean, light flavor. It was midday, and we drank gazing across the sunlit valley at the foothills of the eastern mountains of the Great Himalaya Range.

Darjeeling, at 2134 meters above sea level, sits in the hills of India's West Bengal state. The town of about 90000 people straddles a ridge, spilling down the slopes like a draped blanket. To the north is Sikkim, which India annexed in 1975 as its 22nd state; to the northeast is the mysterious Bhutan; Nepal lies in the west, and to the south are the flat plains and the Bay of Bengal. Visible on clear days is the sacred Mount Kanchenjunga (8598m), the world's third highest mountain and part of the Himalaya group. Darjeeling also holds a special interest for the botanist, ornithologist, trekker, photographer and artist, apart from the holiday-seeker. After flying into Calcutta and we stumbled sleepily into an overnight first-class train to New Jalpaiguri, which was not too bad really. Next was a bumpy three-hour van ride up dizzying hairpin turns to the hill resort. British roots in Darjeeling began in the early 1800s in the midst of fighting between Nepalese Gurkhas and the kingdom of Sikkim over the area. The town, wrested from Sikkim through negotiations, was then made a hill station and health resort for the empire's officials. Today, the past is still evident in colonial buildings, prestigious English-medium boarding schools and of course, tea.

The local people are mostly Nepalis and Tibetans. Nepalis, like our tea shop lady, Kessum, whose forefathers were recruited by the British to work in the tea plantations, have stayed on. More recently, Darjeeling had an influx of Tibetans fleeing the 1959 Lhasa revolt against Chinese authority. A refugee centre was established the same year. Many shops and hotels are now run by the industrious Tibetans. As such, Darjeeling now have a distinctive Nepalese and Tibetan touch, more so compared to even other states in North East India. The Darjeeling refugee centre has an orphanage, home for the elderly, a temple, school and clinic. It's also where young and old Tibetans make bags, sweaters, carpets, dolls, woodcarvings and paintings for sale to support the centre. The curio shops in town carry a wider variety of trinkets, including jeweler boxes, silver accessories, leather goods, shawls and Buddhist artwork.

If you're into Buddhism, there are several temples and gompa (monasteries) to visit in and around town, the area being home to a large Tibetan community. The name Darjeeling, which means "Place of the Thunderbolt", is said to have been derived from the monk Dorje Ling who started a monastery here. If you?re up for some climb, try to trek up the summit of the Observatory Hill, for this is where the Mahakal Mandir is located. With fatigue and slight mountain sickness, this climb proved to be quite a challenge, but the reward on top was well worth it! Through the hazy mist we saw the Mahakal Mandir, standing inside two decorated gateways - a curious blend of Buddhist and Hindu architecture. The presiding deity here is Lord Shiva, whose representation was carved on the rock wall. As we entered the holy shrine, we were beckoned to take a seat by one of the devotees. He told us that the Mahakal Mandir was once the original site of the Buddhist monastery started by Dorje Ling and it still is of great sanctity to the Buddhists. By now, Observatory Hill was almost dark and the fog was much thicker. As we started our climb down, we could feel the fierce Mahakal giving us his blessings.

Another claim to fame here is the toy-train. This tiny antique steam locomotive chugs up and down the mountainside at a painfully slow speed, but offers riders wonderful views of the valleys. It was recently declared a world heritage by the United Nations. According to fellow travelers we met in Darjeeling, a ride in the famous blue and gold toy train up to Ghoom, the highest point on the railway line is a must. The lilliputan locomotive was constructed in 1881 by Franklin Prestage. Today, it chugs through beautiful countryside, offering a grand view of the Darjeeling town. After a 45 minute scenic ride, we arrived in Ghoom. Here, we decided on a short stroll around a small local market to purchase some fruits.

The town is also known for the conservation of two endangered animals - the snow leopard and the red panda. The Padmaja Naidu Himalayan Zoological Park is where these beautiful creatures are showcased and is said to be the only snow leopard breeding centre in Asia. Besides the highly endangered animals, the zoo is also home to the Himalayan black bear, Siberian tiger, wild yak and several types of wolves. Especially striking was the dangerous looking black leopard - a rare specimen or a "freak case" born of a normal colored leopard. There were also many varieties of Himalayan birds which included the majestic black eagle and beautiful multi-colored pheasants.

Nearby is the Himalayan Mountaineering Institute, founded by Tenzing Norgay, the world-renowned Sherpa who accompanied Sir Edmund Hillary up Mount Everest. Besides teaching mountaineering courses, the institute houses exhibits on the two men's feat and other Everest expeditions. Tenzing lived and died in Darjeeling.

The chilly climate is conducive to huddling in a warm cafe with hot cups of tea and Tibetan snacks. Momos, or dumplings, come steamed or fried with vegetable or beef filling. These, and a beef and barley soup, were among my favorites. Most restaurants sell a mix of Tibetan, Indian, including vegetarian, Chinese and Western food. The best way around town is by foot (the alternative is to hire a pony and a guide). The steep streets which zigzag up and down the hillside are hard on the legs but they allowed us to interact with the locals. One afternoon, we wandered into a Tibetan primary school where a flurry of activity was taking place in the yard. It seemed to be a practice session for a sports day. Older students were stringing colorful flags across the school compound while the young ones screamed, laughed and kicked up dust as they competed in three-legged races and sack races. Their ruckus was infections and we began cheering as well!

The best time to visit Darjeeling is from March to May and September to November. An additional incentive in November is the Tea and Tourism Convention, where travelers get to learn and try different types of tea grown in India. We were there last month and could feel the chill of winter approaching, even though it was only early October. Each night, we snuggled in our beds with hot water bottles provided by the hotel as the building, like most others there, was not heated. There's plenty of accommodation in town catering to budget and mid-range travelers. Ours was Hotel Dekeling (RM60 a night for doubles), a cozy outfit run by a Tibetan family who provided efficient, personal and friendly service, including serving us hot tea in bed every morning to start the day with.

The easiest route for most travelers is probably by rail. Major cities like Calcutta, Guwahati, Cochin, Bombay, Madras, Bangalore and Delhi have direct trains into the New Jalpaiguri Station at the base of Darjeeling. If you fancy, there is a toy train from New Jalpaiguri up to Darjeeling, which is about seven hours long. Otherwise, hop into a bus, taxi or jeep for a three hour ride up the summit.