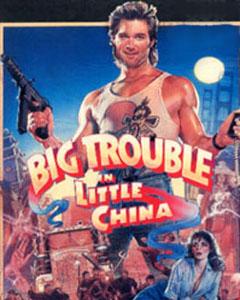 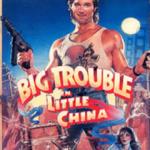 When the earth quakes and the thunder crashes and the pillars of heaven shake, there's only one man who can save us: Jack Burton. A truck driver based in San Francisco's Chinatown, Jack makes an unlikely savior against the ancient Chinese curses that threaten the entire universe.

Jack Burton, played by Kurt Russell, is arrogant, smug, foolhardy, and seemingly without redeeming qualities. When he drives his good friend Wang to the airport to pick up his fiancée, Miao Yin, a beautiful Chinese girl with "eyes like creamy jade," their world gets turned upside down. The adventure begins when Miao Yin gets kidnapped at the airport by a band of street thugs. Wang and Jack chase them to an alley, where they get caught up in a showdown between two rival Chinese gangs in the midst of a funeral procession. Three superhuman warriors known as the Storms intervene, and Lo Pan, a powerful evil warlord who longs to free himself from a curse brought upon him over two thousand years ago, appears on the scene.

In their perseverance, Wang and Jack continue on in their quest, never suspecting where their persistence will take them, or how far they will have to venture in order to save Miao Yin. Yet they never quit trying, and it is this indomitable spirit that drives them to heroism.

Along for the ride is Gracie Law, a tenacious immigration lawyer who doggedly follows Jack and Wang on their mission. Little does she know what fate awaits her at the end of a frantic escape from Lo Pan's fortress, where she becomes another captive of the evil Lo Pan. Another player in this colorful cast of characters is Egg Chen, a Chinese tour bus driver who delves deeply into Chinese black magic and sorcery. When he meets up with Wang and Jack, he sees a perfect opportunity to realize his lifelong mission to kill Lo Pan.

With a premise deeply rooted in Chinese history and mythology, Big Trouble in Little China is a fun, action-packed cult classic. The villains are based on ancient Chinese myth. Lo Pan is a Chinese warlord who was cursed for his crimes by the God of the East and the first emperor of China. He became immortal, yet old age still took its toll on him. His body became frail after many years, and in his mystical state, he was cursed with formlessness, unable to interact with tangible matter. This curse would continue until Lo Pan appeased the God of the East with an offering of a bride with green eyes. His henchmen are the Storms, the human embodiments of the strength of thunder, the swiftness of rain, and the power of lightning. They were immortal as well, but nonetheless able to interact with the physical world like normal humans.

Big Trouble in Little China's main character, Jack Burton, is arrogant and self-centered, yet somehow charming in his own way. In the beginning, he is a true skeptic, and is only interested in Wang and his fiancée because of the gambling debt that Wang owes him. However, once the quest to rescue Miao Yin and the battle with Lo Pan and his forces are over, Jack has realized his faults, and has become a better man because of it.

For a movie made in 1986, Big Trouble in Little China has surprisingly realistic special effects. The Storms were able to capture the look and feel of lightning, thunder, rain and wind, and the blinding flash created by Lo Pan's transformation between human and formless dream is dazzling. Another well done effect is Lo Pan's ethereal interaction with the physical world. In his dream state, he is unable to interact with physical objects, and instead passes right through them.

The movie also has excellent martial arts choreography, from the first huge battle in the alleyway, to a smaller skirmish in Lo Pan's fortress. Every battle scene had to be carefully choreographed, and there were plenty of fighting scenes, which included some excellent sword play. The scene in which the three Storms show off their weapon skills is absolutely amazing.

Big Trouble in Little China perfectly follows the model of the classic Hero's Quest. The hero begins in his known world, with his friends. Soon after, he must venture into the unknown to continue his quest. Once in the unknown, he faces many hardships until he undergoes a transformation, eventually leading to his triumph. Soon after, he returns home with a gift, in Jack's case, a better attitude toward life in general.

An action-packed ride, Big Trouble in Little China is a movie that mixes the old with the new, and seamlessly integrates the two. The characters are charming, the villains are scary, and the entire story is unforgettable.