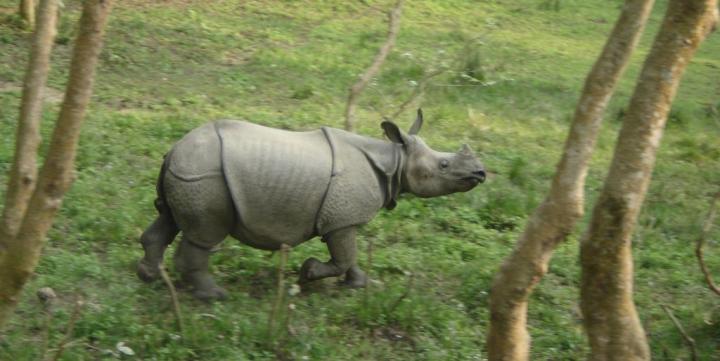 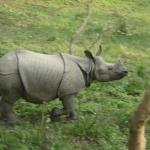 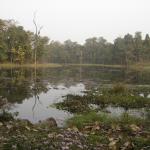 Mountains of dung, some measuring as high as my shoulder, have my guide in a state of high excitement. He is ‘one hundred percent sure' we will sight a rhino today.

I have been well drilled on Rhino escape tactics. The best thing is to run like hell and get yourself up into a tree but the Riverain forest of the Royal Chitwan National Park is a fair distance away, almost to the horizon of this grassland.

Zig zagging as you run is also highly recommended, given the bulk of the beast. But a zig in this territory could just as easily become a zag if you tripped in your haste and fell flat on your face.

Rhinos can turn 180 degrees in the distance of their own body length; there is still the rhino's capacity to go from zero to forty kph in less time than my guide can say "Run like hell!"

We stay downwind, ducking from dung pile to dung pile as we track the Greater One Horned Rhino of Nepal.

With very poor vision, Rhinos will often charge first and ask questions later, says my guide. Just as well they are vegetarians, I respond, uncomfortably aware of my lack of running skills. I can't remember the last time I ran, let alone zig zagged.

It is because of their poor eyesight that Rhinos have developed this George Bush style of approach, and earned themselves a bad rap as a result. In fact, rhinos are gentle animals who use body language, including a complex system of exhalations for expression and communication.

Looking at another pile of fresh dung, I wonder aloud if perhaps an elephant would have been a better viewing platform than my trainers. ...but the guide has grabbed my arm and is motioning me to quiet.

We want to get close but not too close, he whispers. We are whispering because the rhino has perfect hearing if only limited eyesight.

A small scavenging bird level with the top of the grass marks the location of the rhino upon whose back he sits, dealing with parasites in turn for his free ride.

A rustle in the grass ahead, the rhino moves into our line of vision presenting us with a close up view of his rump. At first view, there seems to be too much animal for it to be one rhino but rhinos are solitary creatures and soon I see that it is a fully grown male, standing at six feet and weighing in at 7 thousand kilos.

The survival story of the rhino within the Chitwan National Park shows there is no room for complacency. A census taken in 2000 showed that there were more than 500 rhinos in the Chitwan- a 25% rise in the population over previous years. But five years later the population had dropped by nearly one quarter. Poaching has been blamed largely on inadequate security caused by the long-running Maoist insurgency. The Rhino is just managing to hold his ground.

The Chitwan National Park Park is fed by the Narayani and Rapti rivers which mark its northern and western boundaries, with buffer zones and community Forests making up the rest. It attracts a wide range of migrating birds quite apart from the five hundred different species noted in the park.

As we make our way down the Rapti River before entering the park proper, my attention is taken by the toothy grin of the Gharial crocodile, a fresh water species currently on the endangered list.

Inside the park we are again advised on safety rules, with the emphasis on what do to in the case of a sloth bear attack. Both guides hold a stick and demonstrate how they fend off a bear attack. Their movements remind me of a Maori warrior with a taiaha. Reassured, we scout along the grassland then roam into the forested areas of the park. Small troupes of Rhesus monkey ahead signal the presence of cheetal deer. Deer and simian live together as the best of neighbors, sharing resources (the monkeys will knock fruit down to the deer) and warning each other of the approach of danger.

An elephant ride at sunset provides the best opportunity for spotting the Rhino. In a clearing, a mother and baby graze on fresh grass while the lumbering frame of a male cruises along the forest edges, searching for sweeter grass under the bushes.

The white rhino has a wider mouth to accommodate its dietary preference for grasses, unlike the black rhino of Africa who feeds on leaves and shrubs.

As close as we get to them, they show no distress if anything they seem a bit bored with us.

The mahout turns the elephant and we crash through the jungle to the next clearing where two more rhinos graze on the edges. Sensing or smelling our approach, they give us a demonstration of their zero to forty speeds when they burst into the forest with squeals and grunts.

The last day we wandered into the nearby Twenty Thousand Lakes, a wetland area and Community Forest. Barking deer grazed alone, rhesus monkeys once again gave away the location of herds of cheetal deer and just as we are leaving - the unforgettable sight of the magnificent rhino shockingly solid against the soft greenery of the water land. A gentle giant holding his ground with grace and dignity.