by Dianne Sharma-Winter, May 9, 2008 | Destinations: Cambodia 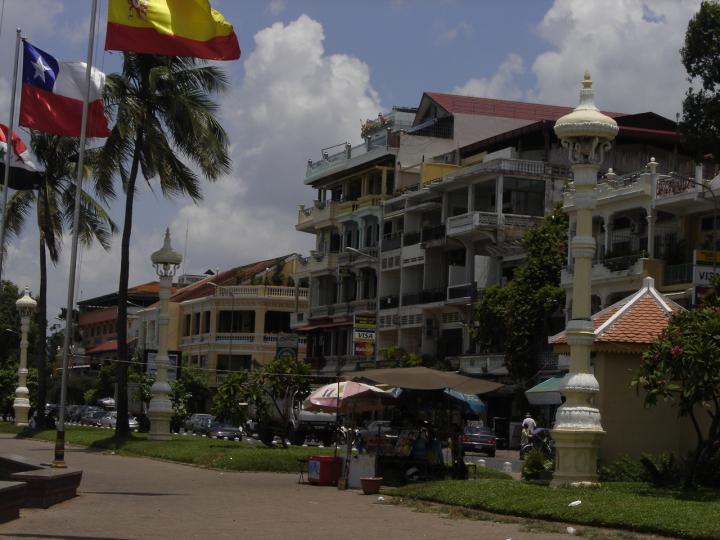 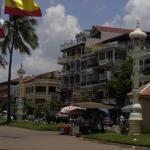 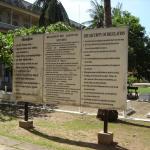 The chaotic streets of Cambodia's capital Phnom Penh give a sense of the turbulent history of this land of contradictions and surprises.

As our car nudges its way inch by inch through the melee, where motorbikes and luxury cars jostle with heavily laden bullock carts at the point where Charles de Gaulle Boulevard intersects with Mao Tse Tung Road, an emerald Buddha reigns with sublime benevolence from the sanctuary of the gold and gaudy Royal Palace of King Sihamoni.

Phnom Penh is a city that bears its history with a very oriental equanimity; there is little point, says the average Cambodian, in agonizing over things of the past. The future is on the doorstep and they want to grab it with both hands.

There is no doubt that the Cambodians are an industrious people, a mere thirty years after the soldiers of Pol Pot forced the evacuation of the city and marched the entire population into what is now known as the Killing Fields of Cambodia, Phnom Penh is as bustling as any other Asian metropolis, albeit as contradictory.

We are searching for Tuol Seng, formerly the Khmer Rouge S-21 prison, now a genocide museum, where over twelve thousand people were detained, tortured and eventually killed by the Pol Pot regime.  Even the name connotes a terrible meaning in itself. Literally, the ‘poisonous hill where those who bear or supply guilt', Tuol Sleng Prison was established in 1976 specifically designed to detain and exterminate anti-Angkar elements.

The Khmer Rouge managed to exterminate over two million of the citizens of Cambodia, turning the entire country into a concentration camp where everyone was forced to participate in the agricultural reform that was designed to liberate Cambodia or die.

Previously a high school, the buildings were shut off from the world with sheets of corrugated iron reinforced with electrified barbed wire. The classrooms were converted into prison cells and torture chambers. Victims were taken from all walks of life and many different nationalities (New Zealanders included) were also interred there before being exterminated. Children as young as ten years of age were recruited from amongst the prisoners to work as guards and medical personnel.

The Khmer Rouge, with a weird attention to the imperialist bureaucracy they so despised, took photos and details of all the detainees.  Today their faces stare back mutely in row upon row of photographic evidence of a world gone mad. Every face demands a witness but one stands out above all, a woman with her eyes firmly closed against her impending doom.

The regulations still posted outside the gallows in Tuol Seng give instructions for behavior under torture.

"Do not try to hide the facts by making pretext of this and that. You are strictly prohibited to contest me," advises the caution. "Do not tell me about either your immoralities or the revolution", and "While you are getting lashes or electrification, you must not cry at all".

I declined to visit the Killing Fields further out of the city, where the blood and bones of hundreds of thousands more victims of Pol Pot fertilized the rice paddies now brown and barren in the pre monsoon heat. Instead we made our way to the modern Killing Fields of Cambodia, one where the same rules for behavior under torture still apply.

Svay Pak is easy enough to find, directions to it can be found on the internet. A rough dusty street, no longer than 100 metres jammed with perhaps twenty brothels, it is the latest gathering place for pedophiles from abroad. Accents from all over the world can be heard as men take a beer after their activities in ramshackle buildings made chillingly from the same kind of cheap air bricks that were used in cells in Tuol Sleng.

This is where the life of a child can be bought for three American dollars, where foreign men refer to child sex slaves as ‘players' and where even police, with an average wage of US$25 a month, can be bought off to avoid prosecution. Despite the recent law changes in Cambodia which make this kind of traffic illegal, often raids to the red light districts are advertised well in advance giving the brothel owners time to flee across the border to Vietnam with their child slaves or move them into other cities such as Siem Reap.

A UNICEF survey concluded that unscrupulous brothel owners in Cambodia alone hold almost twenty thousand children captive, fully one third of the total amount of sex workers in the country.

Child Wise (ECPAT Australia) is conducting Child Safe Organisation Training to local NGOs and INGOs within Cambodia, focusing on how to set up child protection policy and procedures within the organization. They also advertise a website for reporting child sex crimes.

ECPAT is a global network dedicated to combating child prostitution, abuses and trafficking. Spokesperson for ECPAT New Zealand Jane Foster says, "When we approached New Zealand NZ Travel and Tourism operators in 2005 and 2006, to promote our website for reporting child sex crimes, there was a poor response."

"They did, however support our lobbying the Ministry of Foreign Affairs & Trade to include a page on child sex crimes on its travel advisory website in March."

"To the best of our knowledge the only travel & tourism operator in New Zealand that supports the World Tourism Organisation Code of Conduct regarding children is the ACCOR Hotel group," she continues. "Currently, New Zealand is not a member of the World Tourism Organisation so there is little knowledge of the Code here. ACCOR is a French operator and their compliance with the code stems from the parent company."

Driving out of Phnom Penh towards Siem Reap, the scorched rice paddies await the first downpour of the monsoon from clouds that billow overhead; occasionally the sky is raked with fingers of lightening. Lining the roadside are ponds of farmed lotus, their pink flowers so favoured by Buddha. In a matter of weeks, these same fields will be as vibrantly green with new life as the emerald Buddha at the Royal Palace.

I say a silent prayer that the children of modern day Cambodia can rise up also untouched through the muddy Killing Fields like the eternal bloom.

TheCode.org - Code of Conduct for the Protection of Children from sexual exploitation in travel and tourism.