I'll Have Wax Sculptures, Flowers On the Side, Hold the Suffering 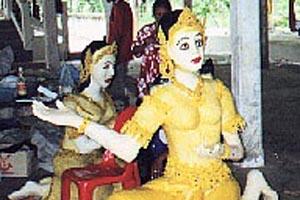 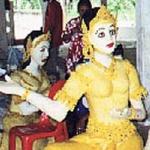 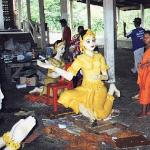 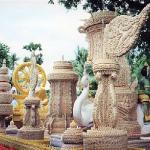 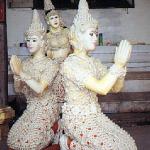 The sermon is supposed to have occurred on the full-moon day of the eighth lunar month. Every year on this day, the event is celebrated as Asanha Bucha (also Asalha Puja). The actual date varies from year to year, but it tends to fall in July.

Asanha Bucha also marks the beginning of Khao Pansa, the three-month Buddhist "Lent", a.k.a. the Buddhist Rains Retreat. During Lent, new monks are temporarily ordained, while seasoned monks retire to their temples for a respite from their wandering.

Apparently the Buddha himself initiated this annual period of seclusion. He noticed that monks wandering outside of the wat inadvertently killed insects and destroyed crops. As Buddhism is opposed to the taking of life, the Buddha ordered the monks inside. A more likely explanation is that Lent coincides with the rainy season: even tough-as-nails monks prefer to be dry. On Asanha Bucha, as on the other Bucha days - Makha and Visakha - Thai Buddhists visit their local temples for a candle-bearing procession around the temple's chedi. But each Bucha has its own specific object and form of celebration. Asanha's object is the Sangha, and the form is flowers and wax.

"Lent candles" are large candles placed in a temple compound and kept lit until Lent ends on Ok Pansa day. This tradition also started in the times of the Buddha. But in 1937, the northeastern city of Ubon Ratchathani began parading their candles around before delivering them.

Since then, a competition has been introduced for the best wax sculptures in two categories, sculpted and imprinted. Thus was born Ubon's most popular event: the Candle Festival, taking place in Thung Si Muang Park. The festival's highlight is the parade and competition, but it also features local performances, including reenactments of events from the life of the Buddha; sales of local products and northeastern food; and even a "Miss Candle" beauty contest.

Royalty also participates in the festival. The provincial government makes a formal request to the King of Thailand to give a candle (the "Royal Candle") to a temple under his patronage.

Both monks and laymen construct the wax sculptures, which consist of a base of wood or plaster coated in beeswax of various hues, e.g. saffron and green. Multi-colored pins are inserted to resemble jewels. Paint is then applied to highlight faces and other features.

The sculptures represent the usual figures of Buddhist mythology: erawans, celestial dancers, sitting Buddhas, chokras, and multi-tiered parasols. From a distance, the life-size human forms are startlingly life-like, while the other sculptures are as dazzling as chandeliers.

Making the sculptures out of wax accords well (whether intentionally or not) with the Buddha's views on the impermanence of all things. Piles of tiny candles are melted to render the wax. After a great deal of patient work, the humanoid sculptures are endowed with a kind of life. But their builders must work with the constant awareness that this life will soon revert to a homogenous mass of wax.

Buddhists celebrate monks in a different way at the Phra Buddha Bat ("Holy Buddha Footprint") shrine in Saraburi. Normally, in a ritual called tak bat, a monk will walk around a village with his alms bowl and receive offerings of rice from the villagers. But on this day, instead of rice, Buddhists offer dok mai: flowers. Hence the festival's name: tak bat dok mai. The monks then ascend to the shrine and offer the flowers as a tribute to the Buddha.

Together, the two festivals provide Buddhists with an opportunity to "make merit". But for all people it provides an opportunity to comprehend the enormous respect accorded monks by the laity, by seeing this respect expressed through art and nature, through the wax of bees and the flowers bees adore.