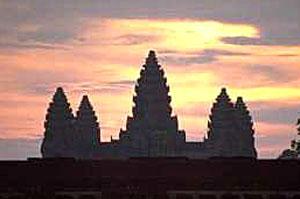 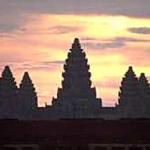 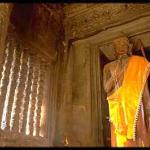 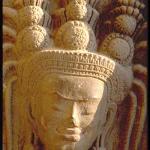 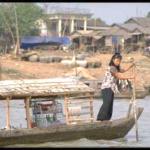 The morning sun rays blocked by forest trees, I am confronted by a glaucous mass of rocks, like some primordial giant may have dropped them there to see what shape they'd make. As it happened they fell in temple form, albeit in a rough and tumble way. As the new light touches the soaring central tower, an astonishing exquisiteness is improbably revealed. A giant creviced face - so archaically congenial with its eyes demurely closed - emerges from the mass of brutal rock, to inform that what you see is human work, and of the very finest kind. For this is the Bayon, the great and enigmatic "statue of the world" sited at the heart of the late 13th century Cambodian city, Angkor Thom.

With the sun now in command, I explore the temple site with infinitely more respectful eyes. Other famous aspects of this cosmic temple mountain see fit to show themselves - like the cruciform gopuras, or entrance gates, that duplicate themselves within the courtyards that surround the central mass. More of the faces have awakened in the light. Their humble meditative smiles serve to humble you as well. Four of these Lokesvara Buddhas adorn each of the temple's crumbled towers, all 54 of them, facing the cardinal directions.

Stepping up to the peripheral gallery, murals carved in low relief confirm the human aspect of the place. The ancient populous is resurrected in the vital morning light; heroically defending their kingdom from the Chams, discussing business ventures near their stalls, attending cock-fights, cooking rice cakes, hunting, fishing and haggling with traders on the wharf. It's enough to let you know that life in rural Cambodia has altered little since eight hundred years ago, when the Khmer empire stretched from Champa in the east to Lopburi in the west (in present day Thailand) and south into Peninsular Malaysia.

The Bayon and the vastly more resplendent Angkor Wat are but two of scores of ancient temple sites that comprise the 300 square kilometres of what is known as Angkor Park.

I had travelled here by boat from Phnom Penh. This is the standard way you go (unless you choose to fly). It was the way French travel writer, Pierre Loti, went in 1901, as described in his romantic masterpiece - Pilgrimage to Angkor. Only Loti set out from the then colonial capital by steam boat. Our craft was a motor launch.

Once out on the Tonle Sap, a tributary of the Mekong, Phnom Penh's business centre rapidly recedes. We have returned to river life surely as it was at the time of Angkor Thom. Thatched bamboo houses rise above the sandy banks, on piles as tall as trees. At their feet are other dwellings - floating ones - that when the monsoon rains arrive ascend to meet their land-based neighbours almost eye to eye. Canopied sampans ply the river, propelled with magic deftness by an oarsman at their bow.

How long was it before we reached a floating village - an hour, maybe two, but I had lost my sense of time. The houses here had floated out from shore, as if they wished to greet us as we passed. The next village, Kompong Chang, is the capital of the province of Chang. The pile and floating houses are multiplied here twenty fold, as also are the sampans. Some passengers alight. Kompong Chang is an increasingly popular tourist destination in itself. I felt a tinge of envy at the ones who got to stay.

"Until the middle of the day we continue our passage over this motionless lake, which gleams like polished tin. On the eastern horizon what looks to be a kind of green foam stretches endlessly, always the same; tall trees, the trunks of which are entirely submerged, so that the tops alone arise out of the water." So wrote Pierre Loti who had travelled in November when the monsoon rains had come. It is then that the Mekong is so deluged by its Himalayan feeders it actually reverses via the Tonle Sap, swelling itself into a mighty lake.

We were travelling in April, and Great Lake is only half its swollen size. Still it's like an inland sea, its surface, yes, like polished tin. A fleet of motored transfer boats collect us from the launch and whisk us away through yet another floating village, this one straddling the mouth of the Siem Reap River.

"They appear at about six o'clock in the evening, these roofed sampans, emerging one after the other from under the masses of creepers... And then we begin to thrust our way with the oars into the labyrinth of trees. Here slumbers a very narrow river which we begin to go up, brushing up against reeds and plants of every sort."

A few kilometres upstream another fleet awaits us on the bank. These are kombis. They follow the river, which we glimpse through tangled foliage as we pass. Rows of thatched stilt houses - snugly secluded in the verdure on the banks - inform that we've arrived at Siem Reap, a city of some two hundred thousand souls.

So rustic at its fringes, Siem Reap is tranquilly colonial at its heart, with a smattering of the brash new white hotels that serve to prophesize its boom. I loved the place the way it was, with its arched wooded bridges, hawker stalls, continental restaurants and expansive boulevards. A stroll out from central will soon have you by the river once again, where peoples' lives appear so little changed.

"Men and women, half naked, slender, with copper-coloured bodies, move around amongst the verdure. They go on backwards and forwards a little out of curiosity to see us; but they look on discreetly, smiling and kindly."

We would set off for the "ruins" next morning at dawn. Angkor Wat faces west, and is best seen in the afternoon. This was why I scooted off to see the Bayon's giant faces catch the early morning light.

"...I raise my eyes to look at the towers which overhang me, drowned in verdure, and I shudder suddenly with an indefinable fear as I perceive, falling upon me from above, a huge, fixed smile; and then another smile again...then three, then five then ten."

Among the palaces, terraces, temples and reservoirs that are the sprawling remains of Angkor Thom is the Ta Prohm monastery. It has been left as it was found, and as it was in Loti's time: in the throse of being devoured by the inextricable jungle into whose dark and savage jaws it dared intrude. Its mossy walls are crumbled, or buttressed, who can tell, by the giant clawing roots of silk-cotton trees.

Fabled and romanticized by ancients and moderns alike, Angkor Wat is surely the most majestic and harmonious temple in the world. Yes, it was "discovered" by Frenchman, Henri Mouhot in 1861, but had never been lost to the Cambodian world. Monks had kept the jungle at bay since the city's abandonment five hundred years ago. King Chan of Phnom Penh visited the site in the 1570 and ordered renovations. Aside from the damage done in recent political upheavals - the seven headed naga snakes and a number of the Apsaras (celestial angels) suffered mostly from the madness - the temple is remarkably complete.

The bas-relief murals of the outer gallery - all 800 metres of them - are more heroic and hierarchical than those of the Bayon. They have lost surprisingly little of their detail over time, and seem even to gain beauty from the blackened gloss imparted by a million touching hands. The fifteen hundred Apsaras were carved on walls and pillars for the god's own delight. Now they are for our delight as well, with their wrap-around brocades, high jewelled diadems, ornamental belts, nymph-like postures and enigmatic smiles.

The modern day visitor to Angkor is privileged - afforded access that would once have been reserved for the high priest and the king.

We climbed the precipitous steps to the uppermost of three central pyramidal tiers. This is the base platform for the five main prasats (towers), the central one of which leads your gaze ever upwards to spheres where the very gods abide. Tripping almost blindly through a maze of giant pillars, corbel vaulted galleries and cruciform gopuras, up yet another set of steps, I arrive at the temple mountain's heart.

"Here formally was the Holiest of Holies, the place where the supreme Brahma was enthroned; but it has been walled up at an unknown period of time."

This was where Suryavarman 11, the builder of the empire and of Angkor Wat as well, communicated with the god interceding on behalf of the people of his realm. The cella walls are now removed. Within the tiny chamber, I gaze with undeserving eyes upon the god. An incense stick is handed me to burn. Such a humble gesture! With it I feel that my journey to Angkor is complete.

Getting There: Thai Airways International has regular scheduled daily flights from Bangkok to Phnom Penh.

When: The best time to travel is the cool dry season from November through January. The wet season is from May through October.

Visa: Required for Cambodia. Cost: US$20.