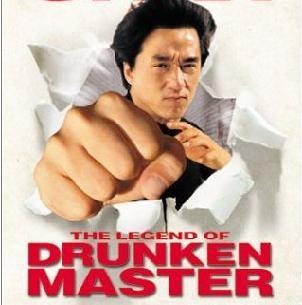 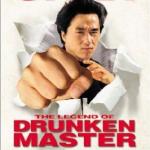 Everyone knows Jackie Chan to be the great action star that he is from his recent work. But what about his older work, from the time when men were men, stunts were stunts, and special effects didn't exist? Jackie's newer movies may have quite the kick, but they're nothing compared to the older gems such as Chan's Legend of Drunken Master, from 1994. An amazing movie, Legend of Drunken Master doesn't deserve to be relegated to ancient film history, but to be remembered as an example of Chan at his best.

In a time when Chinese martial arts movies were being released by the dozen, movies had to have a catch to set them apart. And one of the most widely used ones was making the main character a famous martial arts figure. For this movie, the figure is once again Wong Fei-Hung, a famous Chinese martial artist featured in many movies. In this one, however, he plays the son of a physician and martial arts master. On his way home from a trip to buy herbs for his father's patients, Wong Fei-Hung tries to avoid paying customs on his herbs by slipping them into a British Ambassador's baggage. However, after a mix-up, he finds himself in possession of one of the few remaining Jade Seals of the Emperor, and the ambassador's men are quickly dispatched to retrieve it.

However, Fei-Hung is a master of the forbidden art of Drunken Boxing, a martial art utilizing a combination of swaying, unpredictable movements to allow maximum freedom in a fight, and the consumption of large amounts of alcohol, which loosens up the muscles and increases the pain tolerance of the fighter. As he drinks more, he grows stronger, able to take on many fighters at once with ease, becoming an unstoppable force bent on the protection of the stolen artifact.

The action sequences are amazing in this movie. There is a scene near the opening where Chan fights an unknown foe underneath a train, and an entire fight is carried out in a three-foot tall space, including amazing weapon techniques. The scenes with Chan performing his Drunken Boxing are amazing as well. He does an awesome job showing the drunken style of fighting, with its fluid movements, its unpredictable footwork, its seeming lack of balance, and its power in spite of what seems to be sloppy movements. The final seven-minute fight scene is downright breathtaking, and deserves to be in the top ten fight scenes of all time.

Even more amazing is the amount of work that went into the film. When people in the film are on fire, they're actually on fire, with crews of fire extinguishers on the scene just in case the flames last too long. One actor repeatedly injured himself, so Chan had his personal bodyguard, Ken Lo, intensively train for three months to take that role in the final fight scene. And last, but certainly not least, the final fight scene took over four months to film, with each take resulting in approximately three seconds of usable action on film. Put it all together, and you end up with an excellent movie, start to finish.

Legend of Drunken Master is available on Amazon.com.