The Moon's Dark Fortnight: A Journey through India 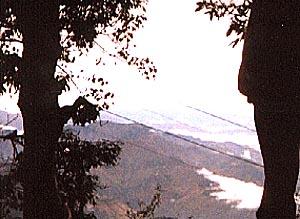 Near the Top of the World, Dalhousie, India. 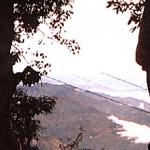 "There is the path of night and smoke
The path of the moon's dark fortnight
And the six months' journey
Of the sun to the south:
The yogi who takes this path
Will reach the lunar light
This path leads back
To human birth, at last." --Bhagavad-Gita

I had lived in Bombay, but it wasn't until I had traveled more extensively through India that I could claim to have been in India at all. In three weeks of travel, my friend and I visited Delhi, Agra, and Chandigarh; the hill stations of Dalhousie, Dharamsala, and Simla; and the southern cities of Hyderabad and Warangal.

The world outside of Bombay was like a hallucination. On the train to Pathankot, I saw on the tracks opposite the upright upper half of a man's body. Its arms were nearly touching each rail. Its mouth was locked open in rigor mortis. To this day, I doubt what I saw.

A train brought us into Delhi at night. The atmosphere was a mixture of mist, auto exhaust, and smoke from Diwali firecrackers. Delhi was a stark, colorless vision of industrialization. We debarked from the train and entered Paharganj, strewn over with Diwali bulbs and carpeted with exploded firecrackers. Tireless celebrants threw them at cars and tourists. It was a scene reminiscent of Apocalypse Now: we walked stunned and paranoid, our eyes wide. That same night, we took a rickshaw to India Gate, but we could scarcely see it through the pollution.

I felt very far from home. This was especially true in Chandigarh, the sprawling and deserted city designed by modernist architect Le Corbusier. We arrived via taxi from Kalka and were dropped at an intersection whose restaurants were all jerrybuilt and threatening. The only other obvious food was mitthai, sweets. I almost burst into tears.

Arranging for travel was as maddening. While in Chandigarh, I went to a place called - enticingly enough -- Chandigarh Tours and Travels, but the woman there directed me downstairs. Downstairs, I found some snack joints, but no travel agency. I approached a booth reading DELUXE BUSES FOR DELHI. It is impossible, said the fellows there, to buy tickets for the next day. Reservations, in short, do not exist.

To the rails then. I saw a sign that read RAIL RESERVATION CENTER. But it was placed above the entryway to the bus depot; below it were the same stairs I had recently descended. The CENTER, the sign seemed to imply, was on the stairs themselves. Nevertheless I boldly climbed the stairs and found the sought-after CENTER. It was fronted by a timetable showing no trains departing from Chandigarh, so I went inside. I found two or three queues, each quite long, and no enquiry window. Everyone seemed to be holding slips of faded paper in their hands, but I couldn't figure out their origin. I asked someone and he pointed to one of the empty windows: the papers were stuffed between the window and a computer terminal. The slips were to be filled out with one's reservation information, of which I had none. Someone approached me and asked me where the enquiry window was.

I returned downstairs and discovered, on the opposite side of the RRC sign, another. Taken together, the signs now implied the RRC to be contained in the slab of cement between them.

I returned to the DELHI booth and found the previous four attendants replaced by one altogether different. I looked again at the timetable, a piece of paper stuck to the booth. The table was hand-written and excessively edited. The fare appeared like an afterthought in red pen in a lower corner. When I asked again about making reservations for buses leaving the next day, the narrow-faced Sikh muttered "1:30, 2:00" and then gestured dismissively to an enquiry window across the way. I looked at the timetable again. No 1:30. No 2:00.

I walked to the enquiry window. Behind it were five or six men. None of them paid any mind to the window itself. Instead they talked amongst themselves or shuffled massive paperwork. One eventually turned, rather as if he had noticed the clouds suddenly covering up the sun. He directed me to the next window over, where a man sat at a desk and stared at a ledger. I posed my question. He seemed to understand it, but looked away while other customers budged in front of me. After a couple of minutes I petitioned him again. He mumbled a question across the room and then told me to go to Booth No. 11: DELUXE BUSES FOR DELHI. But they sent me here, I said. He did not seem bothered by this absurdity. There was, according to our Indian hosts in Chandigarh, a travel agent in the Shivalik Hotel, so I went in search of it. This proved to be easier than supposed, and the agent there efficiently took my money, sent a gopher to get the tickets, and told me to return in an hour. When I returned, the travel agent said, "It is impossible to make reservations for the DELUXE BUS FOR DELHI." (At last! A corroboration!) "But," the agent continued, I could show up fifteen minutes before the departure time (?) and get a ticket. No problem.

The next day we walked confidently to the booth. But because it was Diwali, no deluxe buses were going to Delhi. We would have to take an ordinary bus, a 10-hour trip to Agra. So we immersed ourselves in train timetables again. Meanwhile, I ran down to check on our last resort, the ordinary bus. It is "just leaving," declared the clerk. This was ambiguous. "Abhi?" ("Right now?") I asked. He flicked his head - the Indian "yes". I ran upstairs with this news. We gathered our stuff and ran downstairs to discover the bus pulling out.

Securing a bus from Pathankot to Dalhousie was no less baffling. The enquiry desk told us to go to a ticket counter, the 1st ticket counter to a 2nd, the 2nd to the 1st. Ultimately we were informed of the non-necessity of buying tickets. As I was about to enter the bus, an especially bulbous-faced and stout Sikh began shouting at everybody to come with him. He had a militaristic urgency, as if we were part of an evacuation. I shouted "mera dost" ("my friend") back at him: my friend was on the other bus.

Much the same transpired going from Dalhousie to Dharamsala. Made impatient and bitter by our attempts to decode the poor labels of the buses leaving Dalhousie, we were rushed on to a bus headed for Dharamsala. The bus was packed from the beginning and our seat was at the bus's impassable entrance. The bus described a crazy, descending spiral from the hill station, and I spent most of my time monitoring my stomach. I remembered how to pray. There is nothing romantic or noble in prolonged nausea. Adventure ends there.

Already every bus mishap had occurred, short of explosion: flat tires, failed headlights. A friend of ours rode to Manali through a rainstorm in a bus without a windshield.

The roads returning us to Pathankot were not much wider than our bus. Every time headlights appeared ahead, the bus groaned, squealed to a swift stop, lurched, negotiated, and then threw us forward again. Obstacles included cows, hoards of army transports, horse-drawn carts, jeeps clothed in camouflaging leaves, and, of course, other buses. Every time I felt annoyance ebbing, some malevolent agency - I began to believe this agency to be India itself - would send a new irritant. A man leaving the bus clambered over our bags, and us. Punjabi police blocked the exit when we needed food and bladder relief. New passengers demanded our seats.

The driver had ignored the softness of road shoulders all the while, but we had yet to confront any real threat to our lives. But once, seeing again the headlights of an approaching bus, the driver stepped inexplicably on the gas. The bus hit the shoulder and began to swerve. The driver swung the steering wheel wildly. A bridge appeared out of nowhere - narrower still than the road - yet the bus continued to wobble. Control was restored seconds before we would have slammed into the bridge's short guardrails.

Some of the passengers were terrified or angry when the bus was ultimately righted, but many applauded. The driver got a pat on the back.

The roads were not the only menace. In Agra, I came down with a fever. I lay racked by chills in a Rs.50 hotel room for most of the day. At last, we snagged a rickshaw to the train station, only to discover that our desired berth had not been booked from Agra as expected. All the way to Hyderabad, we lay in fear of being ejected from the train, into that unkind wasteland of scarcity, with nothing more to sustain us than fly-assailed samosas, nauseating Indian tea, and foul bidi smoke. This was the "area of darkness" Naipaul wrote about in his book of that name. Millions of Indians are still trapped in night, still born out of dirt, still carpeting the floors of railway stations. Lights are rare and dim. This infernal trip from Agra to Hyderabad was a kind of conversion experience. Darkness and dirtiness were all pervasive. Our closed no-AC cabin permitted no air but my own contagion. My stomach was without food and shriveled for lack of water. I slept face down on a vinyl bed while the fever sweated out what little water my body had retained. I thought I might die. In that cabin, I thought I had lost forever my juvenile taste for flirtation with death.

Graham Greene, in his autobiographical Ways of Escape, writes of a similar experience:

"The fever would not let me sleep at all, but by the early morning it was sweated out of me. My temperature was a long way below normal, but the worst boredom of the trek for the time being was over. I had made a discovery during the night which interested me. I had discovered in myself a passionate interest in living. I had always assumed before, as a matter of course, that death was desirable."

Arriving in Hyderabad, we went to visit a school in nearby Warangal. A teacher shook my hand and her hand shot back as if she had touched a hot stove. She forced me to acknowledge how ill I was, and sent a pyoon (peon) with me to purchase an antipyretic. A doctor in Hyderabad summarily put me on a regimen of antibiotics and the fever passed.

Pulling into the Bombay train station at last, I counted myself lucky to be alive. Previously a place I regarded to have a terror and scarcity all its own, Bombay now appeared a vision of peace and bounty. New York was on some other planet.

Some time later, the Times of India told of a school bus falling into a stream near Delhi, much as our bus nearly did en route to Pathankot. Many children were killed or injured. Such stories, of buses toppling into oblivion in some mountainous locale, were common enough in India. Annually, some 60,000 Indians lose their lives in traffic accidents. In this case, one school bus was trying to pass another by accelerating. Allegedly - hauntingly -- the majority of the children on the bus were cheering the driver on.