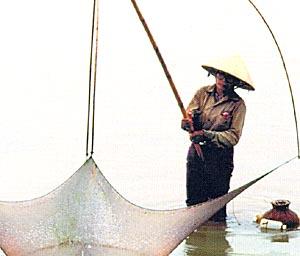 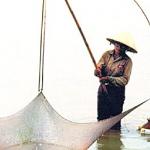 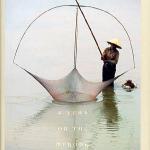 In her novel The Lover, Marguerite Duras described the Mekong River as a kind of dauntless sewer, insofar as it seemed capable of carrying anything that happened to end up in it. And there are plenty of opportunities for this to occur: like several of Asia's most famous rivers, the Mekong begins its course in the snowy heights of Tibet, passes through China, forms part of the border between Laos and Thailand, snakes through Cambodia, and then empties out into the South China Sea from Vietnam. The longest river in Southeast Asia, it can be seen in the national capitals of Vientiane and Phnom Penh, as well as the holy city of Luang Prabang; some have even argued that Cambodia's landmass is essentially the accumulation of silt from the Mekong over several centuries. It ranks with the Nile, Tigris, Yangtze, and Amazon, not only in its magnitude but also in its being the basis for an entire civilization, a unifier of peoples having little else in common, despite what proponents of a spurious pan-Asianism may say.

Former New York Times correspondent Edward A. Gargan is certainly not the first person to negotiate the Mekong, but his account The River's Tale is a fine introduction to the geography and history of the river and the countries through which it runs. People already familiar with this history may find little new in the book (among other things, Gargan discusses the rudiments of Tibet's occupation by China, the ruinous Pol Pot years, and the immiseration of Burma under military rule.) But Gargan adds a personal touch to these lecture notes from Asian Studies 101.

Gargan is an old Asia hand, a former student of Chinese history and a resident of Beijing. He also spent two years in federal prison for refusing to register for the draft during the Vietnam War. So much of this river's tale is a tale of that war, not only because of his active opposition to it but also because it was probably the region's most traumatic recent event. The mass exodus of the Lao elites often involved perilous Mekong crossings; several American bases were located near the river (e.g. at My Tho and Nakhon Phanom), as was the Khmer Rouge stronghold in Strung Treng; and its course through southern Laos often coincides with that country's most bombed regions. So for many years the "sewer" river carried bodies, bombs, and blood.

The Mekong also passes through the Golden Triangle, so no doubt its waters have also transported quite a bit of opium, although most of it probably went overland on its way to China. Gargan is quick to remind us that it was the British who essentially inaugurated narcotics trafficking in Asia, though that does not absolve Asians (and especially the Chinese) for ably taking over the trade. Burma's generals in particular deserve censure in this respect, but also Laos' military government and elements of Thailand's police force. Arguably much of Thailand's development has been fueled by drug profits, while in Burma and Laos the profits have enriched only a select few. Plying the Mekong between Laos and Thailand, Gargan is profoundly disturbed by what he sees on opposite sides of the river. On the Lao side, nothing but nature. On the Thai side, every imaginable indicator of a prosperous, modern country. In his book The Trouser People, Andrew Marshall suggested that Burma makes virtually nothing; according to Gargan, the same could be said of Laos. For him, this is no sleepy, contented backwater, but a country of "dark impoverishment" comparable to that of several African countries.

And, he argues, the same could be said of Vietnam, which remains one of the poorest countries in the world, due mostly to its leadership's refusal to abandon power to more competent people, and its self-serving adherence to discredited socialist policies. And at least in Saigon, Gargan finds that there may even be less resentment toward Americans than toward the rulers in Hanoi; nearly 30 years after the city's "liberation", he finds its mood closer to that of occupation. This isn't so surprising, as the country can very roughly be divided into 3 significantly distinct regions - formerly known as Tonkin, Annam, and Cochin China. At various times in history, there has been no Vietnam per se.

Or Cambodia, which for several centuries has been contested by its stronger neighbors Thailand and Vietnam. Siem Reap, the town adjacent to Angkor Wat, testifies to former "Siem"ese domination, and Cambodia's current leader Hun Sen was installed by the Vietnamese. (Vietnam also maintains considerable sway over Laos; rumor has it that Vietnamese troops remain in that country despite official denials.) Like me, Gargan was shaken, literally and perhaps permanently, by a visit to Cambodia, and specifically by a visit to the Tuol Sleng prison in Phnom Penh, whose most obvious lesson is how fragile a thing is humane behavior. And when it dissolves, human beings become only calculating beasts. Although the Khmer Rouge is generally believed to have disbanded, Cambodia remains in a state of near anarchy, while what government it does have is seen as predatory. The only consolation perhaps is that this is nothing new.

A constant theme of The River's Tale is how the cultures of the Mekong countries have been eroded, or at least altered, by other cultures. Gargan ponders the fate of Tibet given its ruthless and continuing subjugation by China (he is particularly nervous about a projected railroad into the country.) Every Southeast Asian country's commerce is essentially controlled by the Chinese, whose artless construction projects and kitschy art are arguably more depressing in their uniformity than Starbucks or knock-off Nikes. And Thailand can't help but export its vibrant, electrified culture to its immediate neighbors. Only Burma has succeeded in some degree at fending off foreign influences, including all the good ones, but its pariah status has forced it to curry favor with the patron of all pariahs, China.

"Romantic or uncritical mourning of some historical past," writes Gargan, "is not particularly profitable intellectually or aesthetically, but the imperatives of modernity are not necessarily incompatible with a reverence for, or at least a simple appreciation of, historical beauty and accomplishment." Gargan suggests that this carefully worded statement is one that the Han Chinese do not understand. And nowhere does he hear a good word about the Chinese, who are seen as pompous, grasping, and crude. (A few pages before remarking upon the hideousness of Chinese toilets, Gargan quotes a woman from one of China's oppressed ethnic minorities; she says that the Han Chinese are "pigs": "They spit. They throw cigarette butts on the ground. What can you do with these people?") And despite the extraordinary opening of its economy, China retains features of a police state: years earlier, Gargan himself witnessed the massacre in Tiananmen Square.

Of course China alone cannot be blamed for the homogenization of the Mekong countries; America is also responsible. But while he meets some critics of the United States (most memorably a Vietnamese still angry about the American withdrawal), he mostly finds that even those who have suffered at America's hands still admire it. Largely this seems to arise from a sense that the US can do anything - an omnipotence perhaps exemplified by the technical wizardry of Hollywood, which may be America's foremost representative worldwide. And to an illiterate Lao rice farmer making less than $2 a day, something like The Matrix must seem the work of gods.

V.S. Naipaul has said that an alien way of living was imposed on European colonies, and once the colonizers had left, the colonies would either begin to revert to old modes or adopt the alien ways incompletely and incorrectly. As an example, he noticed that in certain parts of Africa no one stayed on the paths created by Europeans, but walked every which way, because that is what they had always done. In many Asian countries, this waywardness has disastrous consequences when it comes to automobile traffic, as Gargan notices in China: "right-of-way is accorded to each driver in every circumstance, a practice that leads frequently to horrendous accidents." Colonized by the French, Laos was then supported by the USSR until its collapse in 1989. "Between 1990 and 1997," writes Gargan, "the percentage of paved roads in Laos declined from 24 percent to 14 percent" - and to this day, Laos has no railroads. It is poor because it has always been poor; the French and Russian periods were mere interludes. As was the American period: a Lao doctor glowingly informs Gargan that his hospital was built by Americans, almost as if it had been dropped from the sky. Even the stress on literacy - especially universal literacy - is a Western import, and as such it tends to fade. (Vietnam boasts over 90% literacy, but universal literacy is a legacy of Communism, a Western import.) "Laos," says Gargan rather shockingly, "has only one university."

The attachment to old ways is not merely defiance of the West. Most Indians I knew in Bombay continued to call it Bombay, and not Mumbai, because before it was Bombay it wasn't anything much. And Gargan reports that Saigon's residents are disinclined to call it Ho Chi Minh City. Even though events in the Mekong countries over the past 50 years or so have been as turbulent as the Mekong itself, societies do not change as easily as all that. The black market, private farms, indifference toward national borders, Buddhism, extended families, hierarchical forms of address - all these core cultural markers persist despite recent efforts to destroy them. So by the end of this well-told, intimate, but often tragic river's tale, one has reason to hope that it may yet have a happy ending - that the cultures, like the river, will endure.

Review of Edward A. Gargan's The River's Tale, Vintage Departures, 2002.