Ode on a Thai Fresh Market (With Love and Squalor) 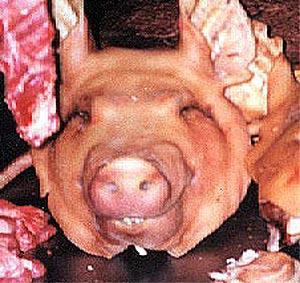 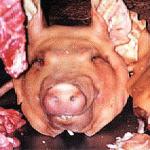 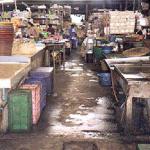 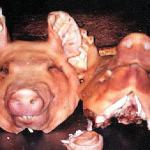 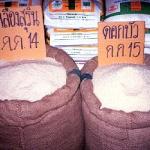 Every Thai municipality worth mentioning has a fresh market. In a way, the market defines the municipality, and only recently have the 7-11s and Kodak Expresses and Panasonic electronics shops cropped around the ancient agora. In less traditional countries, these flashy new foreign entrants might spell the fresh market's doom. But in Thailand, people tend to be somewhat reluctant to heed the slightly hysterical pitches of the multinationals - "Lower prices all the time!" - if heeding them means rending a hole in the enduring fabric of their lives.

And in any case, the pitches are not ingenuous. Many a Thai will maintain that, say, the fresh market's 5-baht fried chicken wings taste better, and are fresher and healthier than their more expensive, artificially preserved, factory-raised KFC counterparts. Recent books like Fast Food Nation are beginning to bear out this folk wisdom.

A fresh market rarely has a queue, and the vendor is likely to be, or eventually to become on first name-terms with you, or may be related to someone you know. The vendor is unlikely to utter a single insipid "Have a nice day", or the now fashionable, "My name is Somchai and I will be your chicken vendor today."

On the other hand, I have always found the phrase "fresh market" (talaht sot in Thai) to be something of a misnomer, and the market itself somewhat repellant. The food may be fresh, but the market is grim, the atmosphere stale. Hay and vegetable matter and flesh go to rot in buildings and under canopies that admit little light. The vendors do what they can, but the ritual sweeping of animal juices into sewer grates only partially diminishes their fetid effect, while fans dismally spinning overhead only move the dust around. One is happy to leave behind the butchers and their skinned pig heads and linger among the florists and their natural deodorizers, like jasmine, or among the ambrosial ginger and basil.

The markets are labyrinthine. One seldom knows where one is in the general scheme until, after heading instinctually toward the light, one finds oneself on an unfamiliar road. Often it is difficult to determine exactly where the market ends and the rest of the city begins, and the vicinity of the fresh market is usually the most difficult to drive through. (If all of Thailand's noodle-stands and fresh markets were to vanish suddenly, many of its traffic problems would vanish too.)

Unlike many weekend markets in the West, the fresh markets are open every day (from well before dawn, say 3 a.m., until sundown) and their fare is not restricted to agriculture. Cooking oils, condensed milk, incense, Buddha statues, fabric, jewelry, clothing - nearly everything you might need if your needs are simple is here. (I own a homely pair of brown boxer shorts bought in a fresh market.) This is not to say, however, that customers are restricted to the lower classes - even the higher-ups hanker after freshly fried bananas, squid snacks, pineapple chunks dipped in salt.

As with many pre-industrial workplaces, a fresh market works at a slow pace, on an uneven schedule. This is not the domain of punch-clocks or day planners, or even really of clocks or of days. At noon, a woman may sleep unnoticed among the sacks of rice. A sign reads: Closed 3 days. Nor is it the domain of security systems, of clean divisions between "mine" and "yours". Shops are left unattended, and where one shop ends and another begins is not always clear. A person may ask you what you want, deliver it to you, and receive payment without being the product's owner or producer. Uniforms, nametags, and explanations are rare throughout the Kingdom, and the government is as laissez-faire as the people are.

How often are these transactions recorded? I wonder. And when we hear about GDP statistics, can we take them very seriously if this informality is probably the rule globally and not the exception? Is it not so much that the West is richer, but simply that it is more assiduous about keeping books?

On the other hand, I think about marketing and turnover. How much of this stuff gets sold? Business is hardly booming, and the vendors - at least at this hour of the soporific afternoon - far outnumber the customers, but the vendors make little effort to ensnare you. A faint, demure "Hello" or "What you want?" is not repeated if you pass by. In India, I recall, the hawkers' calls are as desperate and pronounced as Indian poverty.

I am startled from my reverie by a tattoo of knife-chops. A woman in the distance is merrily reducing a chicken to fragments with an enormous tarnished cleaver. Her chopping board is a tree stump, and I remember once hearing that wooden chopping boards are less likely to breed bacteria because of some antibacterial agent occurring naturally in the wood - thus disproving no doubt equally hysterical sales pitches for plastic boards in the past. "All artificial! No chance of disease!"

And I remember the advice of Edmund Burke, who gained fame for denouncing the bloody excesses of the French Revolution. If you come across an old fence in a wood on your property, you should consult its builder as to why it was built before tearing it down. It might have been built - and a tree stump might have been used as a chopping board - for a good reason, and one you might not have thought of yourself.

The day may come when the fresh markets are obliterated in the name of urban beautification, or traffic amelioration, or economic streamlining, or some other high-sounding phrase. The vendors will be "liberated" from their toil and find themselves behind cash registers in superstores, or standing over friolators in McDonald's. I hope I never see this day. A certain amount of the fresh market's unregimented squalor reminds us of our origins - as farmers, cave dwellers, lazy nomads bound only by community, self-preservation, and Nature's bounty and whim.