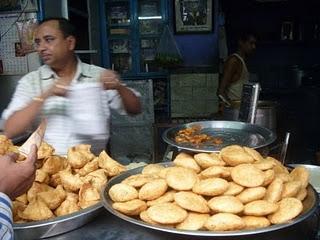 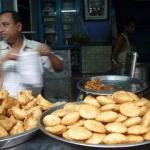 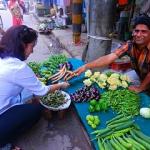 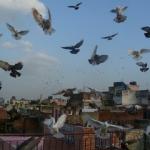 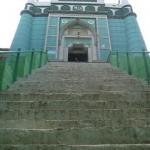 Living these past five months in the tree lined streets of the South, there has been a feeling of a real disconnect for me of the real India. I have stood on my balcony many evenings and yearned for the village, for the close contact of the people, the intimacy of being a part of their lives. The village is for me the beating heart of India, and the city...well, it's a city isn't it?

It's not very often that I have made the trip to Old Delhi. I think the last time I was there was with some Dutch friends who love to mince around the chaotic streets of India, drawing attention to themselves everywhere they go and just buzzing out on the intensity of India's bazaars. I didn't mind walking there with the boys because they both tower over 6 feet tall so I could spot them easily in the crowd whenever we got separated by the rushing river of life that is Old Delhi, but I still have this innate Kiwi fear of close contact streets and traffic.

But walking tours are becoming more and more hip these days, it's probably the best way to see a city and Delhi has started to offer quite a few walking tours of late. One I chose just because of its point of difference was the Old Delhi Sita Ram Bazar Walk which also promised a food trail. The street food of Delhi is something I have also missed whilst living the high life of a captive bird and this food trail led straight into the heart of a family haveli located in the romantically named Shahjahanabad.

Shah Jahan was the Mughal ruler who built the Taj Mahal and who lavished millions of rupees on the building of his capital Shahjahanabad, an area now known as Old Delhi.

The meeting place for the walk was arranged outside the Metro station, simple enough for Dhruv to spot me, the lone phoren woman waiting by the exit ramp. Old Delhi on a saturday afternoon seethes with the sense of any timeless bazar. There is everything to see and exclaim over, my eyes soaked in the noise and seeming confusion like a homing pigeon looking for its way home. Having recently walked hand in page with William Dalrymple around the many faces of the City of Djinns, I was eager to look at this area from another perspective. Now I actually had one, that is! Dhruv led me from stall to stall, there was little need to explain the food or tempt me to try since I am a long time lover of street food in India.

Nearing sunset, from the roof of this mosque we could hear the calls of men from the rooftops of their houses mixing with the sound of the call to prayer. While some people bowed and prayed with their heads to the ground, others had their eyes fixed to flocks of pigeons swirling in the blue sky. These are the pigeon keepers I had read about in Dalrymples book and as always when stories leap from the page to the stage of life, I always get a little thrill. The boy was releasing his pigeons to sweep the evening sky, sometimes collecting the odd random solo pigeon in their wide arching circle. The art of it all was that one needed to be able to call your pigeons home to your rooftop. Should your birds become part of a neighbors flock then you would have to go to them and negotiate for the release of your bird.

Calling across the rooftop to this boy, Dhruv introduced himself and we are invited to the boys rooftop. We meet him down on the street where he quickly buys a bottle of pepsi to welcome his guests with an guides us to the rooftop of his house. In an instant I realised that this was the masala that had been missing from almost every encounter I have had in this five month supposedly five star experience of India. The simple act of meeting people and stepping into their reality if only for a moment and the easy way of acceptance of people who see all as their brother. This is the every day experience of village life that I have been missing and that I had come to believe was only available in the village. Instead in the heart of the heart of Shahjahanabad was the very heart of the city of Djinns. And then the doors swung open into the haveli home of Dhruv and his charming wife, Richa. This is where they will feed and entertain guests and educate them on the many subtle delights of Indian food, hospitality and generosity. All the food is prepared by Richa who even makes her own paneer, the saying in India that love is an essential ingredient of a meal proved in every bite!

It was really difficult to leave, I felt immediately at home and we chatted as if we had known each other for years.  This is also a part of my never ending love for India, she never fails to surprise and charm.