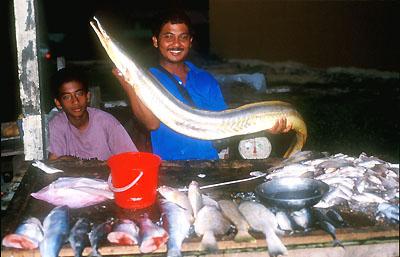 A Malay fishmonger displays his wares. 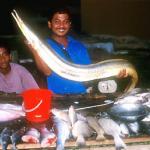 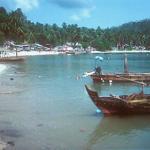 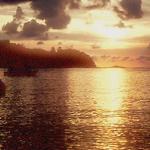 Malaysia's Pangkor Island is no paradise.

But there are places where it comes close. Curving bays of golden granite sands fringed by rainforest-clad hills; Malay villages perched on stilts out over tepid waters teeming with fish. Looking up you might catch two hornbills on a high telephone wire, black and white minstrels sporting distinctive hooked beaks and long tail feathers, or perhaps a glimpse of something shimmering iridescent blue.

On weekends the main beaches become crowded and littered with day-trippers' debris after the human tide recedes. But by Monday, very little could spoil the idyllic setting of golden coves and exuberant emerald rainforest at Coral or Nipah Bays.

Malaysia's better known island getaways include Langkawi, playground of Prime Ministers in the Andaman Sea, north of Penang, and out in the South China Sea, Tioman. Pangkor, lying just off the west coast, is a lesser known destination - at least among foreigners.

Tastes in destinations perhaps mature as does the traveler.

As a confirmed bachelor, uh, backpacker, approaching middle age, I found that the greatest challenge to my penchant for shoestring travel was the acquisition of a regular companion - a Wife, a wide-eyed if enthusiastic novice traveler with a delicate digestive tract.

This fragile flower nurtured in temperate climes, took aversion to some of Asia's teeming cities as slowly she realized that the only fauna she would see or hear were those songbirds confined in bamboo cages in the markets; or worse still, had become those crisp little brown bundles on the street stalls, chirping no more.

From chaotic Java we fled to the relative civilization of Malaysia, taking refuge on Pangkor.

Pangkor does not put its best face forward as the ferry nears the island, 30 minutes out from Lumut on the mainland. The main village straggling along the shore is picturesque enough, but your nostrils will leave you in no doubt how many of the local Malaysian Chinese harvest a living from the sea. Restaurateurs dish up the catch of the day to vacationing mainlanders at fairly hefty prices, capitalising on the Chinese love of fresh seafood. And hey, it's durian season again.

Resort developers have grasped Pangkor's potential, carving out the best morsels for themselves and their pampered patrons. Choices open to the rest of us range from summer camp style A-frames under the waving palms, with semi-military management to match, and up to a tasteful three star standard.

Along the beachfront at popular Pantai Pasir Bogak, on the island's western side, an open-air pavilion set up as a food stall center makes an inspired choice, the more so for the dramatic backdrop as the sun sets out over the waters of the bay. Out in the bay a resort complex is sitting pretty on its private island of Pangkor Laut.

The main village offers a selection of handcrafts and gourmet seafoods at more reasonable prices than along the popular beachfront. A nearby kampong (Malay village) boasts the ruins of a seventeenth century Dutch fort and a boulder inscribed by these pioneer colonizers. Urchins toddle between the unpainted timber cabins, their fathers reclining in simple teashops. The biggest thing that happens is a spontaneous cockfight.

A narrow blacktop road weaves between Pangkor's bays, climbing steeply over the headlands. Motorcycles and bicycles can be hired readily enough, but battered Chinese bone shaker bikes don't always match up to tropical hills and my loyal, panting follower misjudged the brakes on a long, winding descent. Splat!

Patched up and pedalling slowly past the airstrip in the torrid heat of the next afternoon, we detoured - in a flash of inspiration - to inquire about flights out and secured two seats on the next afternoon's commuter hop to Penang.

Another airlift in the offing, where once, traveling alone, I would happily have endured six sweaty hours in chugging ferries, rattling buses, erratic taxis and third class carriages. The cost? Wait for it .... all of thirty US dollars for what promised to be a scenic flight in a small aircraft and an easy escape to the bright lights.

Attempts to "do" Asia in style are so often doomed to failure.

Our bags packed after a leisurely morning, we returned next day to find the flight cancelled. "So sorry, scheduled maintenance of aircraft". Wasn't scheduled as recently as yesterday when you sold me two tickets to Penang, I mused.

Our thwarted fellow passengers, the plummy family from London's stockbroker belt (Daddy, Mummy, and two "girls" old enough to have girls of their own) had paid, no doubt dearly, to island hop by air across Malaysia in pursuit of the Asian Experience emblazoned on the English agency's shoulder bags.

Now a real Asian Experience was forced upon all of us. Once again we chugged back to the mainland by ferry ... and at the landing awaited a big black Mercedes taxi commissioned by the errant airline to convey us north through Perak state; a leisurely and absorbing journey instead through kampongs, rubber groves and cocoa and palm oil plantations.

Lumut can be reached by train http://www.ktmb.com.my/ or bus as far as Ipoh on the main route between Kuala Lumpur and Penang, then a 2.5 hour run by bus or communal taxi. From Lumut there are frequent ferries to Pangkor. Details on http://www.maspro.com.my/maspro/mastour/pangkor.htm From Penang, allow 4 hours by bus or taxi.

Pelangi Air schedules daily flights to or from Kuala Lumpur and Penang. On the island itself there are taxis and a local bus service.