The Main Chedi of Wat Phrathat. 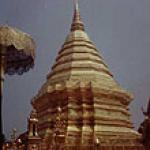 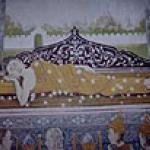 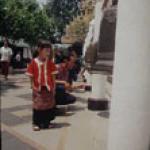 They say you haven't truly arrived in Chiang Mai until you've visited Wat Phrathat Doi Suthep, the city's preeminent wat, or temple. Located atop Doi Suthep, the tallest of the mountains encircling the city, the wat can be seen from below both by daylight, and as a horizontal line of bright lights hovering in the night sky, like a beacon to the faithful.

To get to Doi Suthep from the walled city of old Chiang Mai, you take Huay Kaew Road west. This puts you at the foot of the mountain, where a number of tsong-taos and mini-vans offer package rides to the summit. The 13-km ascent is steep and winding, and one's progress is often slowed by unwieldy tour buses. Meanwhile, practiced Thai drivers - their faith in reincarnation apparently replenished by their visit to the temple -- often execute harrowing passes on the road's curves. If you are lucky, you may also see a long train of pedestrians: every year, the students new to Chiang Mai University ascend the mountain as a rite of initiation.

At the road's terminus is a huge market peddling everything from jade jewelry to hill-tribe dolls to fried chicken. The market extends up the hill to the front entrance of the temple and beyond it. Here you will likely be requested to buy a package of offerings -- a rose, a lotus flower, a candle, and sticks of incense - for twenty baht.

The staircase to Wat Phrathat consists of over 200 steps. Its banisters are the rolling, green-scaled snake-like bodies of the nagas, their multiple, ferocious dragon-like heads forming the banisters' bottoms. The nagas figure widely in Buddhist mythology. They were the first to encourage the Buddha to become a monk. Not one to be persuaded by a mythical snake, he refused. The undaunted nagas thus assumed a human form and repeated their request, which the Buddha then accepted. Sleeping in his palace, the disguised nagas resumed their snake-like appearance, much to the alarm of the royal servants!

The nagas would later assist the Buddha in the critical moments before his enlightenment. The nagas shot down like lightning bolts from heaven to protect him - hence their appearing as banisters -- from any potential tempters -- hence their ferocious visages.

If climbing over 200 steps in a sub-tropical climate is not austerity enough, you can now enter the temple and make merit in other ways. But before you enter the main temple, you must be politely dressed: no tank-tops or shorts, and no shoes or flip-flops. Footwear can be stored in lockers, while silken clothes are freely offered to cover offending skin.

Once inside, light your candle and place it on a rack with the others; deposit your flowers on a metal tray; ignite the incense and stick it into a sand-filled pot. Or you can vien tien -- circumambulate, bearing your offerings, the temple's main chedi. Then walk on your knees within the many rooms jam-packed with Buddha images, wai high to the biggest one, get an auspicious sprinkling of water from a sitting monk, and get a white string tied around your wrist.

As if this were not carnivalesque enough, in a small nook you will find a canister full of Chinese joss sticks. Shake it, and read the number of the stick that pops out. Take the number to a nearby rack of pre- fabricated number-bearing fortunes and read yours. Just behind you is a row of seven Buddha images in different poses, one for each of the seven days leading up to his enlightenment. Find the one that corresponds to the day you were born, and deposit some coins into a corresponding receptacle.

Then take a walk along the inner wall of the main temple. Here is a mural depicting crucial scenes from the Buddha's life. Watch as the Buddha's father is chagrined to learn that his son will be a great prophet, not a great king; as the Buddha leaves his palace for the first time to confront decrepitude, sickness, and death; as he threatens to cut his long hair to signify his abandonment of the princely life; as he emaciates himself under the direction of the ascetics; as he meditates despite the interference of a host of nasty monsters; and, finally, as he accepts rice from a woman the day after his enlightenment.

Leaving the main temple, you will encounter a number of bells and gongs. Ring them - softly - and you will be notifying heaven that you have paid a visit. With this, the process is complete.

Outside the main temple you will also find a plaster statue of an elephant, and here's why: Prajao Asok, an exceptional Buddhist, traveled to India on a pilgrimage, where he received a bone of the Buddha. Returning to Chiang Mai, he wanted to build a great Buddhist temple, but did not know where. So he affixed the bone to the backside of an elephant, which wandered through thick jungle to the present site of Wat Phrathat (phrathat means 'holy bone'), whereupon the beast perished, evidently from exhaustion. The bone is contained within the wat's reliquary.

This was well before any roads led to Doi Suthep's summit. The first road is said to have been built under the guidance of a man named Kroo Baseevichai, enlisting the unremunerated help of the devout. He is now regarded as a saint because of this achievement.

The holy Bo tree outside the main temple also derives from India, having grown from a clipping of the very tree in Bodh Gaya under which the Buddha became enlightened.

If your interest in Buddhism has been piqued, there is a bookstore just outside the main temple. It sells inexpensive Buddhist tracts as well as the usual tourist-geared literary fare. You can read these in a nearby cafe, where, spurred on by the Buddha's rejection of starvation as a means of transcendence, you can eat an ice cream cone.

Wat Phrathat is a remarkably dense and inspiring repository of Buddhist artifacts and practices. A short visit amounts to a sort of crash course in Thai Buddhism in all of its baffling, inconsistent complexity. In a city with a temple at every turn, Wat Phrathat is by far the most majestic and revered: it is to Chiang Mai what Wat Phra Keo is to Bangkok, or the Dome of the Rock to Jerusalem. If, as Henry Adams wrote, "all the steam power in the world could not, like the Virgin, build Chartres", neither could anything but the Buddha build Wat Phrathat.