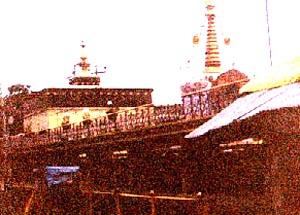 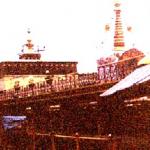 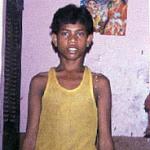 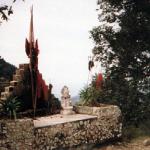 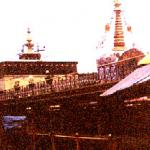 In an exercise in which my Indian students were asked to finish the sentence "I believe that...", commonly they asserted God's existence or God's having certain attributes: "I believe that God is there."

The student did not mean "God is there" as opposed to here: in the Hindi language, the verb hai ("there is"), or hain ("there are") comes at the end of the sentence. Because these students were still unconsciously translating from Hindi whenever they wrote in English, they would often say "The car is there" rather than "There is a car", or "Rules are there" rather than "There are rules." Thus, "God is there" was a statement of faith: there is a God.

Though India is officially a secular state, religion plays an indispensable role in the lives of its people. Prayer is not only allowed in schools; its absence is inconceivable. Every schoolday ended with the following words spoken over the PA system: "Girls, get ready for the prayer." Heads dipped down; hands folded at the center of the chest.

I was working in a Muslim school, so many of religion's manifestations derived from the Koran: daily prayer, all-night vigils, an overwhelming dedication to duties - to "parents, teachers, and all elders", according to the national pledge. The Jamatkhana, a kind of community center, was a weekly destination for many. For Islamic women, barred from prayer in the mosque, the Jamatkhana acted as substitute. In their journals, students wrote of the nightly ritual: preparing their uniform for the next day of school, and prayers. Because I was working in a girls' school with an almost completely female faculty, the appurtenances of women in Islam were in evidence. A few students and teachers, and the majority of mothers, donned the hejab or burqah upon leaving school, sometimes revealing only a thin strip around their eyes. According to a teacher in the primary section, the secondary section was dominated by women in purdah, or seclusion.

Hindus and Christians too showed signs of great devotion. A colleague of mine, a Catholic, went to church some two to three hours every day. The Hindu computer operator went to temple according to some schedule, and appeared at school with his forehead marked by an orange tikka. He carried in his wallet small cards depicting the different Hindu gods, including Jesus Christ. "Krishna," he said definitively, "is a blue god." He regularly observed fasting days, but - nonsenically, it seemed to me - ate while fasting. "This is fasting food," he would say.

Bombay is also home to a seemingly unique American product: born-again Christians. I attended a church service, accompanied by an Indian teacher. It was a church of "born-again believers": mostly Indians, but also Englishmen and some Australians. Banners reading "Jesuah is the messiah" hung from hospital-green chipped walls. The songs beginning the service could have been lifted from any Southern Baptist revival, were they not also sung in Hindi. The adherents lifted up their hands and swayed, and took turns giving abrupt, auctioneer-like devotions to their "almighty God, all-perfect God, all-forgiving God". Then the banners were taken down and swung in time with the music.

It was difficult to tell whether a given person was Muslim, Hindu, or Christian without being told their name. Urdu names denoted a Muslim; Hindi names a Hindu; English or Portuguese names a Christian. Still more difficult was determining a person's sect, if Muslim. There were small differences in clothing - the women of the bori sect generally wore flowery tent-like dresses, the bori men tended to wear gold-embroidered topis -- and small differences in programmes of worship: some students stayed up all night praying and fasting; others cheerfully reported that they did no such thing.

Despite the area's involvement in the explosive 1992 communal riots, little overt tension existed between Muslims and Hindus. When I first visited a 10th-grade class, I asked them what religion they were. A girl in the front row, with a broad, pronounced face and a lazy eye, jumped up and said, "We are Ismailis, sir!" This was later qualified. There was, to no one's chagrin, one Hindu in the room. Hindus, Christians, and nonbelievers alike were invited to Muslim weddings.

But some tension arose from the priveleges accorded the different religions. Each has their own holidays or fasting days; to give recognition to one without giving it to another was a political problem, and yet between the two major religions the number of holy days was quite large. The school also allegedly gave preference to Muslim employees. For example, the computer operator, a Hindu, was being paid less than many of the Muslim pyoons ("peons").

Still, the consciousness of Bombay's communal violence was notable. My students would have been between eight and ten years old when the riots of 1992 set Bombay ablaze. It seldom came up in conversation, but did make its way into cultural events. At the boys' school, a play about religious strife depicted the beating and murder of one man by a pair of others. This act was then denounced with great pathos: "Bible? Koran? Gita?"

The students were somewhat surprised - and often disappointed - that I had no professed religion. It was a common question: "What is your caste, sir?" (The word 'caste' is not simply used to distinguish classes of Hindus; it is perfectly appropriate to speak of the Muslim caste, the Christian caste, but the classificiation goes further into sects, regions, etc. It is an economical way of determining your allegiances and family history. There is no equivalent word in English.) When I leaned up against a wall during the prayer, the children occasionally frowned, or whispered that I should put my hands together. "Don't you pray, sir?" Again, they furrowed their brows at my answer. One day, in an effort to escape drama practice, the children complained that they had to go home to pray. I wasn't sure if this was a valid excuse. The children persisted. "What comes first, sir, God or drama?"

Because Bombay is home to so many different religions, the religions often seem to bleed into one another. Muslims, who officially are supposed to be iconoclasts, celebrated the Ganpati festival along with Hindus. Hinduism seems to make everybody a god. Sai Baba, a prophet credited with reconciling Hinduism and Islam, is now part of the Hindu pantheon: shrines to him dot the city; variegated pictures of him fill taxis' rear-windows.

The carefully codified versions of Eastern religions that Westerners are forced to memorize in school are simplistic. I gave a friend of mine a sticker depicting the god Ganesh and told him confidently that Ganesh was the god of wealth and prosperity, as I had been told. He looked Ganesh up in the encyclopaedia and it told him something altogether different.

An Indian friend once ardently tried to de-educate me about Hinduism. He said that Hinduism was more a way of life - a programme of rituals, an approach to the world - than it was a religion. "Anybody can be a Hindu," he said. Diwali was approaching; in an effort to sound erudite, I proposed that the lights were supposed to guide Rama and Sita home from their exile. "Rubbish," he said. People just put lights out. They may know the Ramayana inside and out, or they may not. In either case, the ritual precedes, or has replaced, the reason.

This friend also espoused the common notion of Hinduism as a religion of accomodation. His wife disagreed. They had had this argument before. Hinduism is accomodating, but if it were so accomodating Hindus would not take pickaxes to mosques in Ayodhya. She refused to let the conversation continue.

I had always been a "free-thinker" in religious matters. The scientific method was my dogma; Socrates was my god. Much of Indian religious practice struck me as pathetically misguided. In Dharamsala, home to India's Tibetan refugees, I watched the Tibetan Buddhists spin small prayer wheels somberly. One man spun a huge prayer wheel, ringing a bell with each rotation. To me, it was like riding a merry-go-round as a sign of religious devotion.

This attitude persisted until, perhaps, the Ganpati festival. During Ganpati, thousands of statues of the elephant-god Ganesha are immersed in the waters off Bombay's Chowpatty beach. I had been warned of the danger of joining the crowds, so I watched the immersion from a distant cliff. It looked as though all of Bombay had decided to throw itself into the sea. The people welled up at the water's edge and funneled well out into the water itself. Their bodies shimmered in the light of the massive lamps; the crowd heaved with the movement of the idols. The roar of the people was accentuated by drumming, audible even from my distant remove. I was rooted to my spot. I had stumbled accidentally upon a mystery, stronger than all of my verbal truths and facts put together.

Furthermore, in India, one cannot always depend on the material world to satisfy. It constantly fails, and recedes into the background. Faced with India's misery, one turns to Indian philosophy for answers, and the answers make sense. The world is an illusion; time is presented on a scale of billions of years so there's no need to hurry, or worry.

The Bhagavad Gita itself is a tract of reactionary, conservative politics. Arjuna seeks alternatives to the mindless slaughter of his brothers. Krishna scoffs: Arjuna's duty is to fight, so fight he must. In the end it takes the strength of a revelation - Krishna's quick change into the indescribable Vishnu and back again - to set Arjuna back on the old, well-trodden course.

My interest in religion, and my attempts at practicing it increased in India, in part because of the heightened religiosity of my environment. But it also increased because the environment was macabre. In his An Area of Darkness, V.S. Naipaul relates the story of the Indian returning to Bombay for the first time in a number of years: sitting at the dock amidst his luggage, he weeps because he had forgotten what the poverty of India was like. In Picture Mumbai, a photographer writes that a Mumbai resident's first reaction upon seeing a man dead on the street is, "My, what a lot of flies."

In the early mornings I sat on the verandah, disturbed by the thought of heading again into the stuffy cramped cab to Dongri. I would sift the Gita for some armor or medicine, and come across a phrase like "He knows no disquiet". The disturbance would ebb. I would repeat it to myself as the cab grinded and trashed down S.V.P. road. And I would tell myself -- repeatedly, desperately -- as soul after soul would approach my cab window to beg for food, that the world was an illusion.