The temple on the hill 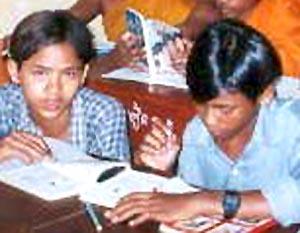 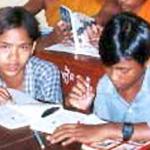 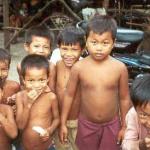 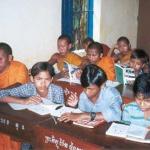 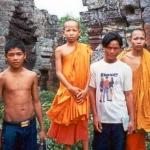 The kids in the village referred to the man in the orange robe as their teacher, though I could tell he was obviously a high-ranking monk in the local temple. I had stumbled upon these people at Phnom Banan, an ancient Khmer temple located at the top of a steep hill about 25 kilometers south of Battambang in the northwest part of Cambodia. Monk or teacher - and he certainly qualified as both - it wasn't until my second trip to Phnom Banan that I finally learned the man's full name and his official title.

On the day of my second visit the monk/teacher was holding court in his upstairs office, next to one of the classrooms where he conducts daily English classes for students in the neighboring village. We had been engaged in a lively conversation for over two hours, joined by an audience of monks and students that drifted in and out of the room, some of whom contributed to the discussion. It was then that I remembered to give the monk one of my business cards. He returned the gesture by handing me a card of his own; a bright pink creation with gold and blue lettering. On it was his name - Lach Vireak - and his title - Secretarial Priest Master of Banan District. Under that information was the name of his village, commune, district and province, along with the obligatory mobile phone number. Yes, even mountaintop monks are wired in this digital age!

To be accurate about it, though, Lach Vireak and his temple school are not located at the top of the mountain, but at the bottom, near the village of Banan. The closest "big city" is Battambang. The guidebooks will tell you that Battambang is Cambodia's second largest city, but don't go looking for a booming metropolis. Compared to Phnom Penh, the country's capital and largest city, Battambang is just a sleepy settlement on the banks of the Sangker River. Sure, it's a good-sized city by Cambodian standards, boasting an airport and a riverside pier (making trips up to Siem Reap - the home of Angkor Wat - a relatively quick and pleasant experience), but there isn't a great deal to see and do in Battambang itself. Once you get outside of town, though, the real magnificence starts. The surrounding countryside is home to an interesting assortment of ancient temples and splendid scenery. Besides Banan other interesting temples in the area include Wat Sampeau (a hilltop spot that features many caves, some of which were used by the notorious Khmer Rouge to dump their victims), Wat Ek Phnom (a larger ruin dating back to the 10th or 11th century), Wat Bassaet (another 11th century ruin) and Wat Snoeung. While it's nice to wander around the ruins, perhaps the most enjoyable aspect to these temple visits is the journey getting there. Bouncing down the bumpy dirt roads, a gorgeous tapestry of nature and village life unfolds before your eyes. Lush green fields and rice paddies, craggy mountains, oblivious farm animals and friendly children form an awesome kaleidoscope. A good portion of the journey out to Wat Ek Phnom is made more pleasant by thick strands of trees that hug the banks of narrow creeks and streams, providing merciful shade from the scorching sun.

Despite the rich variety of rural scenes, the highlight of both my trips to the Battambang area was definitely the visits to Phnom Banan. Like I've witnessed so many times in Cambodia, it's the act of interacting with the local people that make the experience so memorable. To get to the actual ruins at Banan, you must climb a long set of stone steps that takes you to the top of the hill where the ruins await. On my first ascent, I was drenched with sweat and laboring to catch my breath by the time I made it to the top. So much for thinking I was in good shape! Watching my pitiful entrance was a group of five Khmer teenagers, three of whom were dressed in their saffron monk robes. They greeted me with smiles and polite hellos, which I reciprocated. I added a bit of the Khmer that I had learned and that instantly made the kids even more conversational. The non-monks, two boys named Socheat and Poly, followed me around and peppered me with questions while I admired the ruins of the 10th century Khmer temple. The five sandstone towers at Banan are in a pretty poor state of repair and there aren't a bunch of amazing carvings to behold, but the structures themselves still radiate that magical Angkor-era vibe. The view from the top is pretty darn nice, too.

I hung out and talked to the friendly crew - for the most part the three monks listened politely and smiled while Socheat and Poly conducted the interrogation - for the better part of an hour before they informed me it was time for their daily English lesson. I looked around to see where the classroom was, but of course it wasn't there at the top of the hill, but down at the bottom, next to the current Banan temple. Rather than bid me a hasty goodbye, the boys invited me to come down and meet their teacher. This, of course, turned out to be the monk, err, the Secretarial Priest Master, Lach Vireak.

Lach Vireak proved to a gracious host and asked me a battery of questions. He apologized for his inadequate English skills, but actually he spoke quite well. He showed me the classrooms where lessons were taught: sparse, no-frills rooms with old wooden desks and small chalkboards. The students were a mix of boys and girls from the nearby village of Banan, along with novice monks from the temple. Older monks with the requisite English language skills helped to teach the daily classes. Lach Vireak designated Poly, a very bright 17-year-old, to conduct his usual class while he gave me a tour of the temple complex. At one end of the temple grounds, near a landscaped hedge that spelled out "WELCOME," construction was underway on a new main sanctuary to replace an old wooden one that had been battered by years of harsh weather and the brutal Khmer Rouge era.

Six months later, when I returned to Banan for my second visit, I was happy to see Socheat and Poly once again. I brought along reprints of photos that I'd taken of them the previous time, along with a bag full of pens, English-Khmer dictionaries and English language magazines for the school to use. After I presented the bounty to Lach Vireak, he thanked me and excitedly began to peruse the magazines. He seemed especially taken with the colorful advertisements, one of which used a bondage theme to promote a new line of designer shoes. That proved to be a tough advertising concept to explain to the monks, but thankfully we veered off that topic and on to other more educational avenues.

After I finally finished my summit with the monks and students, I found my moto driver Peau waiting patiently for me outside. Noticing my emergence, a smattering of village kids warily wandered over to gawk at me. Prepared for such an encounter, I greeted the little urchins in Khmer and reached into my backpack where I had stashed a package of balloons. I distributed those to the kids who quickly lost their shyness and began to play around and pose for the camera.

Though I wanted to stay even longer, it was getting late and Peau wanted to get me back to town before sundown. I said my goodbyes to Lach Vireak, Socheat, Poly and the others and promised to return again before the end of the year.

I left Banan that day feeling good about the world; proud of Lach Vireak and the work he is doing at the temple school and impressed by students such as Poly and Socheat who were intent on mastering a second language. The future of Cambodia is indeed looking brighter.