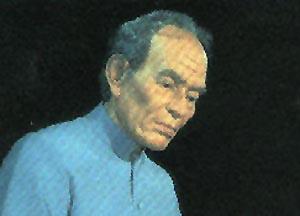 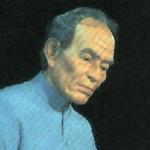 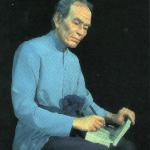 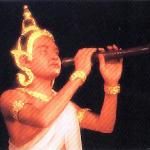 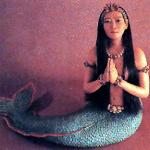 "Oh, how everything was against me then. Even termites made their way to my bedroom. They ate the mat and destroyed all my books. It was distressing to think of those books And the yellow robes I used to wear Had holes in them like my weeping eyes." --Sunthorn Phu

Sunthorn Phu (1786-1855), poet of the Rattanakosin period (1772-present), has become known as the People's Poet of Thailand. In 1986, the bicentennial of his birth, UNESCO officially recognized his eminence. Critics have likened him to Shakespeare and Chaucer in the range, quality, and national importance of his works.

Every year on the 26th of June he is commemorated by a festival at Sunthorn Phu Memorial Park in the southeastern city of Klaeng, birthplace of the poet's father. The festival features recitals, plays, and puppet shows of his works. A statue of the poet stands nearby. At the Thai Human Imagery Museum in Bangkok are displayed wax figures of Sunthorn and the characters of his masterpiece, Phra Abhai Mani, named after its main character.

Yet, as with many things well known to Thai people, Sunthorn is virtually unknown outside of Thailand. Superficially, this is because there are very few translations of his work. (Amazon.com has one listing for 'Sunthon' Phu -- a variant on his name. It appears to be an academic treatise -- in German! -- but there is not a single work by the poet himself.) Why, if he is Thailand's Shakespeare, is this the case?

There are numerous reasons. One is the deplorable lack of translations of Thai literature in general. Not enough Thais are fluent in other languages, and not enough foreigners are fluent in Thai. And in any case, Thai is difficult to translate faithfully. Consider the Thai proverb, "Maew mai yoo, noo raroeng." Literally this translates to "Cat not stay, mouse celebrate." Taken out of its cultural context, this could be a statement of fact about a particular cat and mouse, a meaningless non sequitur, a general claim about master/slave relationships, or any number of other things.

Another reason is the sheer size of Sunthorn's oeuvre. Extant works include 9 nirats, or travelling poems; 5 stories; 2 collections of proverbs; a play; 2 sebhas, or song recitals; and 4 lullabies. Phra Abhai Mani comprises 94 books, adding up to 30,000 verse lines.

There is also a fairly rigid distinction between royal literature and popular literature. Though Sunthorn spent much of his life under royal patronage, he was of humble origins and his themes appealed to a more popular taste. "Unlike so many other poets," writes Prince Prem Purachatra, "he wrote from his heart and not from his head. Not being a learned man, he confined himself to simple forms of verse and simple language." His Phra Abhai Mani single-handedly ended court domination of Thai Literature, so the court has an interest in dismissing it. (One Prince called Sunthorn's poetry "market verse".)

Historically, the royalty has authorized or conducted translations and dominated literary criticism. Only Purachatra, who wrote a significantly abbreviated English prose version of Phra Abhai Mani, wanted to popularize Sunthorn through translation. Indeed, even within Thailand, Sunthorn's popularity was assured not by the royalty, but by a foreign printer, who in 1870 became rich by printing the poet's masterpiece in serial form and selling it to Thai people. As long as this effective royal monopoly is maintained, the People's Poet may continue to be overlooked.

Lastly, there is the issue of Phu's personality and morals. Most Westerners read Thai authors for some insight into Buddhism and its message of curtailing one's desires, and Thailand is probably pleased to present this image of Thai culture. But this image is only partly correct. Sunthorn provides a corrective. Though he was nominally a monk for 18 years, he came from a broken family, had a poet's unstable temperament, and was, according to one critic, "a drunk, a vagrant, and a womanizer." He also did a lot of jail time.

In Thailand it is practically customary for straightforward statements of fact to be contradicted for the sake of saving - somebody's, or the nation's - face. Thus many critics deny the poet's less palatable traits, and they differ as to whether Sunthorn got along with Rama III. Apparently the poet had publicly criticized Rama III's writings when the latter was still a prince. Once crowned, Rama III removed Sunthorn from the court.

Few critics dispute, however, that Sunthorn's first imprisonment came as a result of his illicit love for Chun, a woman of the royal palace. Once freed, he married her and had a son, but he began to drink excessively. This led to quarrels with his wife, and ultimately she abandoned him. He was only 21 years of age when he recorded this struggle in his Nirat Phra Bat.

During a later bout of intoxication, he attacked one of his uncles and was again thrown into jail. Here he first conceived and began to write Phra Abhai Mani, a work Purachatra calls "one of the greatest imaginative works ever written." Sunthorn sold portions of the work from jail, but its progress was interrupted over the years by works commissioned by the royalty, like the famous Khun Chang Khun Phaen, a collaboration between Sunthorn and Rama II.

Like any court artist, Sunthorn's fortune depended in large measure on his relationship with the reigning king. Rama II adored him, Rama III disliked him, and Rama IV made him a Poet Laureate. He maintained this position until his death in 1855.

A contemporary of romantic poets like Wordsworth, Keats, and Shelley, Sunthorn was of a similarly romantic bent. His works are full of magic and mythical creatures, and sentimental Thai girls fondly quote his love poetry:

"We may be drunk,
But we are also intoxicated by love.
I cannot resist my heart.
And though we are drunk,
Tomorrow the sun will shine,
And that drunkenness will have passed.
But when night falls, the intoxication of love will return."

Like the European romantics, he could be seen as writing in reaction to a time of upheaval -- in Sunthorn's case, the upheaval of colonialism. One of the settings of Phra Abhai Mani is an island populated by shipwrecked men from all over the world, including Europe; and among the poem's characters are a Western prince and princess. Apparently, like many Thais at that time, Sunthorn didn't care much for farangs. Thus the Western prince is humiliated in war and dies from shame. On the other hand, Abhai Mani takes up the study of English and Chinese, and ultimately marries the Western princess.

Colonialism brought industrialization, so machines also figure widely in the story. A number of fanciful inventions appear, anticipating ocean liners, gramophones, machineguns, airplanes, and air conditioners. This has led to a comparison between Sunthorn and the early science fiction writer Jules Verne, although Verne was only five years old when Phra Abhai Mani was composed.

Though Sunthorn was a romantic, his romanticism was distinctively Buddhist. He shares the romantics' reverence for nature, but has a Buddhist faith in self-reliance. "Put not your trust in any mortal," says the Hermit of Phra Abhai Mani, "for their wiles are immeasurable. Even the most torturous creepers round the hoariest tree are not as crooked as a man's heart." Phra Abhai Mani also acts as an argument against unchecked romantic desire. War breaks out, as it does in the Iliad, for love of a woman. But unlike the Trojan War, this war is brought to an end not by total victory, but by the intervention of the Hermit, who preaches self-control and compassion for all living things. Abhai Mani himself retires from life. It is a very Buddhist conclusion.

That Sunthorn and his writings can stand alongside such seminal Western authors and texts makes the scarcity of his works in translation all the more scandalous. If he is as great as Thai people say he is, it is high time they shared him with the world. If the Princes won't do it, somebody else should.

The Thai Human Imagery Museum, established in 1982, houses life-like sculptures of notable figures in Thai history. These include the Chakri dynasty kings (Rama I-IX), a number of renowned monks, and common scenes depicting historical, rural Thai life, displayed in four sections: ''The Great Buddhist Monks", ''Former Kings of the Chakri Dynasty", "One Side of Thai Life" and "Playing Chess."