An Unearthly Visit to Wat Composite 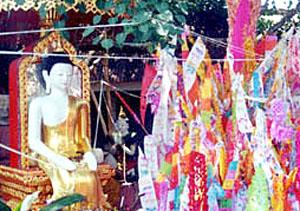 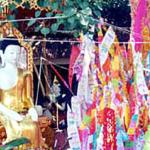 Imagine you were a Martian sent to Earth to investigate human religion. Presently you materialize before a Thai wat, or monastic compound, called "Wat Composite". Opening your Lonely Planets guidebook, you read: "Originally conceived as places to house relics of the Buddha, the Thai wat has come to serve many diverse purposes: monastery, place of worship and assembly during festivals and religious holidays, locus of Thai religious art, as well as the more mundane provision of education, parking, and refuge for stray dogs."

You look up from your guidebook and find yourself gazing into the toothy maw and ferocious, unearthly eyes of a stone animal part lion, part dragon. Starting back in fright, you frantically consult your book. "The singh typically appears sitting at entrances to a wat, including Bangkok's Wat Phra Keo. Harmless to humans, the singh inhabits the mythical forest Himaphan, a place of never-ending rice. It is related to the norasingh, an upright, human-headed lion-bodied Himaphanian."

Relieved, you step through the wat's outer entrance. Monks mill around a tall building, "their kuti, or quarters." You see a school, a garage, a crematorium, a cemetery of numerous shrines housing monks' remains. A sickly and hairless, but amiable pariah dog ambles up to you, his tail-wagging and tongue-lolling interrupted only by spasmodic nips at the flies pestering his backside.

Reading while walking, you bump into the trunk of a giant, sinewy tree with spade-like leaves: "a Bo, or Bodhi tree. Often gated and containing a sitting Buddha and his disciples, the Bodhi tree is sacred to Buddhists, being the tree under which the Buddha became enlightened. Some trees are purported to have grown from clippings of the original tree in Bodh Gaya, India."

Adjacent the Bo tree is a structure suggesting the aftermath of a construction-paper factory explosion, "a dtoong. Every Thai New Year, cartloads of sand are brought into the temple, formed into a pagoda shape, and stuck through with these colorful strips of crepe, ornately cut and inscribed. Temple-goers believe that through a year's traffic, the temple has lost this much sand; this merit-making act is their way of returning it."

Turning from this, you encounter the wat's inner wall, breached by steps. Posted on either side are awful, scowling monsters, holding sheathed swords blade-down, and wearing tall hats resembling inverted funnels. "These are yaks, benign guardian demons." You ascend the steps and slowly the world grows quieter. The honking and grinding of vehicles, the bustle of commerce, vanishes; you hear only the wind, the chimes it caresses, the distant chatter of children.

Once within the inner wall you notice that it forms a gallery housing an army of Buddha images -- "in one of the four permissible postures of walking, standing, sitting, and reclining" -- and "the occasional linga, a huge stone phallus emblematic of Phra Isuan. On the gallery's walls are depicted scenes from the Buddha's life. Here the devata, or demi-gods, revere the Buddha descending from the heaven tavatimsa atop the mythical Mount Meru; there Marn, the demonic temptress, personification of material desires and illusion, tries to wrest the Buddha from his meditation. Also depicted are scenes from the Jataka Tales, each referring to one of the Buddha's 550 previous lives. Other panels are dedicated to the Ramakien, Thai version of the Hindu epic Ramayana, in which Phra Ram, seventh incarnation of Phra Narai, with the aid of the monkey-god Hanuman and his monkey army, defeats the ten-headed demon Tosakan, abductor of Phra Ram's wife Sita."

Passing a tall, roofed, open-air pavilion, or sala, you come upon a bell tower "where worshippers notify heaven of their visit." Towering over this is a huge conical tower. "Though the Buddha himself was averse to being worshipped," the guidebook explains, "he is said to have sanctioned the creation of temples as reminders of his teachings. When he died, his remains were carted to all corners of the Earth to be stored in reliquaries, known in Thai as chedis, and in Tibetan, Sinhalese, Portugeuse, and Sanskrit as chorten, dagoba, pagode, and stupa respectively. Made of stucco or brick, they are generally gilded, painted white, or wrapped in great sheets of gold cloth, or in thin strips of many different colors. They consist of a bell- or dome-shaped relic chamber resting on a square base and topped by a conical spire. At the top of the spire is an often multi-tiered parasol-like shape, "hti in Burmese", hung with the chimes earlier heard. Enclosing the chedi is a chain supporting placards, each inscribed with a proverb ("straying amusingly at times from Buddhist orthodoxy"): Speech is silver, silence is golden; Remember that time is $; Man without dhamma is like sex-crazed dog.

"The chedi, deriving from Indian burial mounds, is commonly the wat's most prominent structure. Where the Hindu Khmer empire's influence was felt, a wat may contain a prang, a corn-cob-shaped tower and reliquary. Such prang populate the wats of Sukhothai and Ayudhya, and Bangkok's Wat Phra Keo; and miniature prangs crown Thailand's animistic spirit houses.

"Not every chedi or prang contain a relic of the Buddha: some merely contain the remains of a beloved spiritual or political leader. Chiang Mai's Wat Jet Yod, for example, contains the ashes of King Tilokaraj, esteemed both as a warrior and as a patron of Buddhist art.

"The mandop, a cube-shaped structure topped by a pyramidal roof, serves a similar purpose: to contain Buddhist scriptures or highly-valued copies of the Buddha's footprint. According to legend, the Buddha flew from his Nepalese home to Adam's Peak in Ceylon, where he left behind an impression of his foot. Emissaries were sent from sundry parts of the Buddhist world to obtain a copy.

"An understanding of Hindu cosmology is essential to an understanding of the layout of the wat as a whole. In this cosmology, Mount Meru, the abode of the gods, has four subsidiary peaks, and is encircled by successive mountain ranges and seas. Beyond these are four continents at the cardinal compass points, and beyond these is a wall of mountains marking the boundary of the known universe. The central chedi, prang, or mandop generally represents Meru, subsidiary structures its subsidiary peaks, the inner wall the mountain ranges, various moats the intermediate seas, and the outer wall the universe's edge."

"According to this interpretation, a tower will contain images of Meru's many deities and guardians. Bangkok's Wat Arun, arguably the acme of Thailand's Khmer architecture, features a mandop supported at its base by caryatids of yaks, inhabitants of Meru's lower regions. Arun's prang houses Phra In, the Thai version of the Hindu Indra, Meru's sovereign god. Above him are seven structural levels representing the seven lower heavens. The prang's finial is Phra In's vajra, or thunderbolt.

"Buddhist cosmology likewise informs the structure of the chedi. Platforms below the relic chamber usually appear triply, symbolic of the Buddhist Traiphum, or Three Worlds of Desire, Form, and Absence of Form. Above the relic chamber is the cubic Harmika, the Buddha's throne. The conical spire, meanwhile, symbolizes successive levels of bliss, and its lotus-bulb finial represents Nirvana, the cessation of desire."

Lifting your eyes from the page, you again encounter some feral creature: "the naak, a mythical serpent and fertility symbol, capable of effortlessly assuming a human form. Like the singh and the yak, the naak is a guardian, being pivotal to the Buddha's enlightenment. The serpent's long, rolling, scaly body often acts as a balustrade, with its roaring, horned head (or heads) rearing at the staircase's bottom. A naak head may be single, or appear in crowned, hydra-like groups of 3, 5, or 7 for reasons of symmetry."

In this case, the naaks are guarding the entrance to a rectangular "viharn, or gathering hall. These are the wat's proper temples, or chapels, and by far the most glorious of a wat's constructions. Regard their sloping multi-layered roofs; flame- or leaf-like projections bai raka; flashing glass and multi-colored porcelain mosaics; ornate triangular gable-boards trimmed by the inverted V-shaped barge-boards undulating like serpents; and cho fa, or hook-like appendages to the barge-boards' apices."

The gable-boards are indeed ornate. This one shows a three-headed elephant, "Erawan, bestrode by Phra In brandishing his vajra." This other gable-board shows a "khrut, a bird-man derived from Indian mythology's garuda, Thailand's national symbol." Still another contains an eight-spoked wheel "symbolic of the Buddhist Eightfold Path."

"Phra Prom, Phra Isuan, and Phra Narai, the Thai equivalents of the tripartite Hindu gods Brahma, Siva, and Vishnu are easily distinguished: Phra Prom, the Creator, by his four faces and four arms, or by his position atop his vehicle, the celestial goose Hamsa; Phra Isuan, the Destroyer and god of fertility, by his trident; Phra Narai, the Re-creator, by his vehicle khrut.

"Pi Ganet, the equivalent of the Hindu elephant-god Ganesha, can also occasionally be found in a Thai wat. Pi Ganet is hard to mistake, with his long trunk, pensive cow-eyes, and multiple arms. If Pi Ganet does not represent the elephant kingdom, surely some other elephant statues will: they stand atop the pedestals of wat entrances, act as caryatids for chedis, and occasionally have a shrine all their own. The location of Chiang Mai's Wat Phrathat Doi Suthep was reputedly determined by the resting-place of a wandering pachyderm, a plaster likeness of which was built on the site in commemoration."

Nor are these the only temple animals. Embedded in the panes of the viharn's outer walls is a veritable zoo: crocodiles in pursuit of each other's tails, squirrels biting a lizard's nose. Mini-naaks squirm from the viharn's corners, while its archways are populated by the "makaras, water monsters dangling flower garlands from their mouths." Here stand gilded statues of the "kinnara and kinnari, respectively the male and female half-bird, half-human Himaphanians."

You ascend the viharn's steps. Here are eight distinct Buddha images, "corresponding to the seven days leading up to the Buddha's enlightenment and the day itself. In this last image, the sitting Buddha is crowned by the guardian naaks." Stacked against the back wall of the viharn's inside is a seemingly boundless collection of Buddha images, one gilded and nearly reaching the hall's high ceiling. Amidst these are a number of photographs and statues of revered monks and portraits of the King.

Many such viharn appear in the compound, but one is unique: the ubosot, or ordination hall. It is surrounded at cardinal and subcardinal compass points by "consecrating boundary stones called bai sema. These stones may be tablets shaped like Bodhi leaves, often sheltered by canopies; or cylindrical columns with lotus-shaped finials. Only in the ubosot can a man be ordained into the monkhood. Ladies are not permitted inside."

Here the guidebook's entry on wats ends, so you make your departure. Standing at the wat entrance and looking out, you realize that the mythical creatures of the wat spill out into the cityscape. You see a billboard advertising Singha beer. The khrut, hamsa, and Bo tree leaf are the respective trademarks of three major Thai banks. Passing by you are university students wearing Pi Ganet amulets round their necks. Naaks are everywhere. The mythical world of Himaphan seems not so mythical anymore, and the real world not so real.

Presently the ingenuous temple dog pads up behind you and disturbs your reverie. Thinking to pet him, you lean down, arm dangling, but the dog darts away in terror, thinking that you were reaching for a stone to throw at him. This delusion of the dog's cements your conclusion. All this architectural splendor was intended merely to perpetuate the Buddha's simple, profound idea: just as we might trick a temple dog, the seeming splendor of the world is nothing more than Marn tricking us. The real world is no more real than the mythical.