The Echo of Ancient Drumbeats 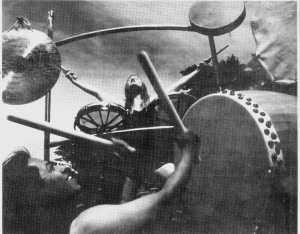 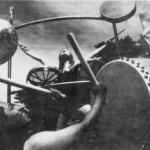 From the lofty mountains and mist-shrouded beaches of ancient Japan, to the lively parades and festivals of modern cities around the world, the art of taiko drumming is part of a rich cultural heritage that is gaining interest and popularity in contemporary times.

On a lovely autumn afternoon, at a gathering to celebrate the Asian Festival of Lanterns sponsored by St. Supery Winery in the heart of the California's Napa Valley, spectators witnessed a spirited taiko demonstration led by instructors Heidi Varian and David Gonzalez of San Francisco Taiko Dojo (www.taikodojo.org). Guided by their instructors' energetically charged vocal cues, eight members of a novice taiko group pounded out, with stunning precision, choreography, and unison, a repertoire of both modern and classic taiko drum-songs.

The air was galvanized by the deeply booming resonance of the great Odaiko, as the drummers wove their richly varied drumbeat patterns: some swiftly urgent, other with crisp staccato, still others rising to deafening crescendo.

When the performance portion of the program was over, members of the audience were invited to take up the bachi, or drumsticks, and experience taiko for themselves. Remarkably, Heidi Varian was able to guide this group of absolute beginners, most of whom had probably never laid stick to hide, through a harmonious rendition of a basic drum-song. With this simple demonstration, it was revealed that taiko is for anyone, young or old, musically adept or otherwise, who has the openness of spirit to join in the rhythm of life.

The History of Taiko

Although its exact origins are unknown, taiko is believed to have originated on the Asian continent. Historical and anthropological references to taiko in Japan date back as early as the sixth century, while artifacts and depictions of drums throughout Asia date back as far as 3,000 B.C. Indeed, with the exception of the human voice, drums are the earliest musical instruments produced by any civilization throughout history.

Within the Japanese culture, taiko holds a significant place as a means of summoning the gods, driving away evil spirits, frightening away enemies, and setting the geographic boundaries of villages since all citizens were expected to stay within earshot of the local drum. In more recent times, taiko has become an essential element of the performing arts in Japan, as Imperial Court music, and as sound effects for Noh drama and Kabuki theater. In contemporary Japan, the renaissance of taiko has served as an important means of preserving cultural tradition.

The Japanese word taiko means both the drum and the drumming style. As with all Japanese art forms, the spiritual elements are essential. Taiko drumming has four basic elements: Rei...Customary Etiquette, Waza...Action, Kokoro...Spirit, and Karada...Strength. As a group, the taiko drummers strive for unison and harmony, using the drumstick as an extension of the self to transfer and translate spiritual energy into sound.

There are many different kinds of taiko drums, which can be categorized into two basic types: taiko with a nailed head, and taiko with heads stretched over a hoop and tensioned with ropes for tuning the sound. The drumheads are usually made of cowhide, and the bodies are traditionally carved from the rare and increasingly scarce wood of the zelkova tree.

Each individual drum produces seven different sounds, and, as with any musical group, each taiko drumming group has its own unique style and sound. In practice sessions, students learn both modern and traditional drum-songs, as well as the choreography that accompanies each piece. Although memorization of the drum-song is necessary, much of taiko drumming performance is based upon verbal cues from the group leader.

San Francisco Taiko Dojo, the first of its kind in the United States, was founded in 1968 by Grand Master Seiichi Tanaka. Evolving from its roots as a primitive folk art to a sophisticated synthesis of rhythm, harmony and movement, San Francisco Taiko Dojo has since appeared in tour performances throughout the United States, Japan, Europe, and the Middle East, and hosts the world renowned International Taiko Festival, held each year at Berkeley's Zellerbach Hall. The music of San Francisco Taiko Dojo has also been featured in the films Apocalypse Now, The Right Stuff, Return of the Jedi, and Rising Sun, which opens with the group?s trademark song, Tsunami.

San Francisco Taiko Dojo founder Grand Master Seiichi Tanaka was born in Tokyo, Japan, in 1943. He graduated from Chiba University of Commerce in 1964 and moved to San Francisco in 1967. In addition to his achievements in three distinct forms of taiko drumming, Osuwa Taiko, Sukeroku Taiko, and Gojinjo Taiko, Seiichi Tanaka is also skilled in the arts of Hogaku, the traditional stage music for Kabuki dance and Noh drama, Yokobue, the bamboo flute, and the martial arts Shorinji Kenpo, Nihonden Kenpo,and Tsurugi.

San Francisco taiko group leader Heidi Vairan was introduced to taiko in 1989 while working as a stagehand for the San Francisco Taiko Dojo. Heidi was invited to join the group, and consequently, her husband, David Gonzalez, took up the art form as well. As a member of San Francisco Taiko Dojo, Heidi has made four performance tours of Japan, as well as hundreds of appearances throughout the United States. Remarkably, David made his taiko debut in a performance at Carnegie Hall.

The Benefits of Taiko Drumming

To anyone who has ever witnessed a taiko performance, its benefits are obvious. In addition to the aerobic workout and muscle toning provided by the vigorous upper body movements and lower body stances, drumming is an excellent way to release stress, tension, and pent-up emotions. Additionally, the psychological benefits of joining with a group for a shared purpose of such a transcendental nature can be deeply gratifying and uplifting. With its Zen-like approach to ever-higher levels of mastery, taiko offers a uniquely valuable opportunity for spiritual growth.