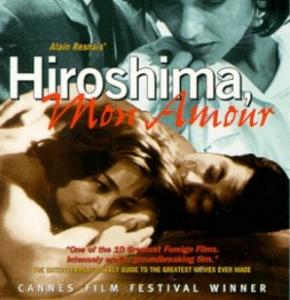 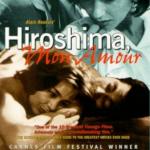 The subject of much comment and controversy, Hiroshima, Mon Amour is the vintage brainchild of French director Alain Resnais and novelist-turned-screenwriter Marguerite Duras. Filmed in high-relief black and white, overlaid with a stylized musical score that juxtaposes post-modern tonalities with Japanese pentatonic melodies, this pensive and self-conscious elegy tells the story of a French actress on location to make an anti-war film in Hiroshima while engaging in a brief but intense affaire du coeur with a married Japanese architect.

As suggested by its Japanese title, Ni-ju-yon Jikan no Joji (A 24-hour Narrative), the film takes place over the course of a single day, during which the two main characters known only as Elle and Lui (She and He) transcend the horrors of war on the wings of passion, only to descend into the dark labyrinth of the human psyche.

Constructed upon the foundation of Resnais' harrowing 1956 holocaust documentary Nuit et Brouillard (Night and Fog), the ambiguity of the opening scene sets the tone of Hiroshima, Mon Amour: The abstract curves of two naked bodies, entwined, covered in ash, soon to be washed by a cleansing rain, and then... the glistening undulation of lovemaking. The narration begins with the softly insistent voices of the two lovers, Emmanuelle Riva and Eiji Okada, engaged in a verbal tug-of-war over what Elle saw in Hiroshima. As the camera moves slowly past scenes of the city, Elle's voiceover describes her visits to the Peace Museum and to the hospital where hundreds of radiation victims lay dying; while the nihilistic Lui maintains that she saw nothing in Hiroshima...nothing.

Stunning historical footage of horrific human suffering in Hiroshima is punctuated by the occasional frame of Elle's hand clenching and kneading the flesh of Lui's naked shoulder as she continues her dialectic. Within the context of both love and war, the message is clear: WE MUST NOT FORGET.

That being said, the focus shifts to the microcosm of Elle's world, and we are transported into the intimacy of the hotel bed the two lovers shared the night before. From their pillow talk, we learn that Elle is from the French village of Nevers in the Loire Valley, but lives in Paris, and is in Hiroshima to make a film. Lui is from Hiroshima, but was away in the army when the bomb was dropped. We are to infer that he lost his entire family that day.

Over coffee and a morning shower, Elle and Lui become further acquainted, filling in the missing details of each others lives that they so tempestuously overlooked the night before, including Elle's vague reference to madness, and the fact that she is leaving Hiroshima to return to Paris the following day. When Lui insists upon seeing her again before she leaves, Elle refuses, offering no explanation. Of course, in a town like Hiroshima, Lui has no trouble tracking her down on the movie set later that morning.

The movie set offers a perfect venue for a return to the big picture: A protest parade in which singing school children carry signs in both French and Japanese that read, "If one atomic bomb is worth 20,000 ordinary bombs, and if the H-Bomb is worth 1500 times the atomic bomb, how much are the 40,000 H- and atomic bombs manufactured in the world worth? This prestigious outcome honors man's scientific intelligence. But it is unfortunate that man's political intelligence is a hundred times less developed than his scientific intelligence...Stop the thermonuclear experiments."

After this brief but bold reminder, we return once again to the intimate world of the two lovers, in which Lui, still insistent that they continue the day together, takes Elle to his home, where they spend the afternoon in his bed while his wife is conveniently away in the mountains of Unzen. With Lui as her touchstone, it is here that we first learn of Elle's scandalous wartime affair with a German soldier. Later that same evening, over beers in a Japanese pub, Elle lapses into a state of deep reverie to continue her tale of how at eighteen, she secretly fell in love with an enemy soldier during the German occupation of France. The affair ended tragically for both: In death for the Nazi, and for Elle, public humiliation followed by the madness to which she had alluded earlier that morning.

In a strange psychological shift, Lui assumes the incarnate role of Elle's German soldier in her reminiscences, thus enabling her to unlock her oblivion and relive her repressed memories of love, loss and the nadir of despair that followed.

With her catharsis behind them, the enigmatic yes-no, stay-go relationship between Elle and Lui continues into the wee hours of the morning, with each trying to say their final farewells, but wandering the streets of Hiroshima instead, only to find themselves at an all night café, which by no coincidence is called Casablanca. There, it becomes painfully obvious that their ill-timed and ill-fated love was never to be. At long last, back in her hotel room, their agony is ended, but not resolved, with the dawn.

So much has been written about Hiroshima, Mon Amour since its induction into the history of cinema. The film has been reviewed and analyzed by critics, scholars and filmmakers, and has been unanimously recognized as a cinematic milestone and a benchmark by all. Its script echoes the melodic stream of consciousness so typical of Marguerite Duras, while the contrapuntal musical score is at once both evocatively classical and jarringly avant garde. Voiceovers by Emannuelle Riva, paired with Sacha Vierny's stark cinematic treatment, create a powerful vehicle for the underlying message of filmmaker Alain Resnais: We must not forget. Neither the obscenities of war. Nor the essence of the beloved, whether living or dead, who will only live on in our memories.

Hiroshima, Mon Amour is a film of pairings and paradoxes. Of macrocosm and microcosm, of remembering and forgetting, of man and woman, of ecstasy and despair, of intimacy and exposure, of love and war, of death and rebirth, of the temporal and the infinite.

Alain Resnais was born on June 3, 1922 in the town of Vannes, on the western coast of France. His career as a filmmaker began when he made his first amateur film at age 14. He studied his craft at the Institut des Hautes ètudes Cinémato-graphiques in Paris, and began his professional career with a series of short films, many of which focus on art and the life of artists, including Guernica, Gaugin, and Van Gogh, which won him an Academy Award in 1948 at the young age of 26. His documentary Night and Fog is regarded by many as the most important Holocaust film ever made.

The cinematic techniques Resnais uses in each of his films are always avant garde and unexpected; and most, if not all of his films touch upon the themes of time and memory, often within the context of intimate relationships. Alain Resnais is considered by some to be the most important and influential director to work in the French New Wave genre.

Alain Resnais is alive and well and living in Paris, where he is working on a new film entitled Pas Sur La Bouche, a musical comedy adaptation of a 1925 operetta, which stars Sabine Azema, Pierre Arditi and Lambert Wilson. Daniel Prevost, Audrey Tautou and Isabelle Nanty. Bouche will be released in France in late 2003.

Marguerite Duras was born in 1914 in French Indochina, which is now Vietnam. As a young woman, she traveled by steamship to France, where she studied law and political science at the Sorbonne. Upon her graduation in 1935, she worked as a secreraty at the Ministry of Colonies until 1941, and shortly thereafter, published her first book, Les Impudents, in 1942. Duras served as a member of French Resistance during World War II, in which she lays claim to the rescue of French President François Mitterand during his days as resistance fighter. After the war, Duras worked as a journalist for several magazines, including the Observateur. She later joined the Communist Party, but was expelled for condemning its policies and lobbying for revisionism in 1950. Around that same time, she wrote and published three more novels: Un Barrage Contre Le Pasifique, depicting the struggles of a poor French family in Indochina, Le Marin De Gibraltar, a cerebral romantic work, and Le Square, an abstract literary work for which she was indoctrinated into the New Novel Group.

Marguerite Duras went on to write 30 more novels, and from there, it was a short leap into the world of film. With a lifetime total of 38 credits to her name, Duras wrote numerous screenplays, directed more than a dozen films, appeared in ten, and adapted several of her novels for the cinema. Hiroshima Mon Amour received an Academy Award nomination, and in 1975, Duras won France's highest cinematic honor, the Cinema Academy Grand Prix for her film India Song.

Plagued by alcoholism and chronic health problems, Marguerite Duras lived out the remaining years of her life in Paris in the company of Yann Andréa Steiner, a writer and actor 38 years her junior, until her death from cancer on November 3, 1996. Throughout their tempestuous 16-year relationship, Steiner wrote two books about the life of Marguerite Duras, M.D. and Cet Amour Lá, which was adapted for the cinema in 2001, with Jeanne Moreau in the role of the aging writer.

Hiroshima, Mon Amour is available in both VHS and DVD format. 1959 87 minutes.