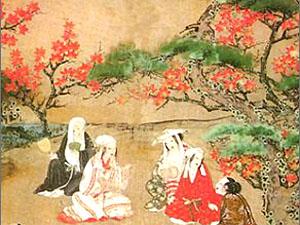 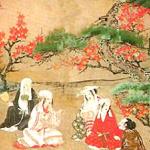 Quick - no peeking. What is the world's first novel? Defoe's Robinson Crusoe? Cervantes' Don Quixote? Here's a hint: the author, though dead, is neither "white", European, nor male, but "yellow", Japanese, and female. (I am, of course, well aware that many "whites" are less white than many "yellows" -- I am only poking fun.)

Give up? The world's first novel is Lady Murasaki's The Tale of Genji, dating from 11th century Japan. Genji has been compared in its scope and grandeur to seminal Western novels like Gargantua and Pantagruel, Tom Jones, and Proust's epic A la recherche du temps perdu, or In Search of Lost Time. Genji is first and among the best.

What is perhaps more surprising than the novel's authorship is that humanity didn't stumble upon the novel form earlier. For is not the novel the most natural form of storytelling? To us, perhaps, but not to our forebears: they preferred drama and epic poetry, just as we increasingly favor film and song. Songs and poems delight the ear and are easy to remember; film and drama delight the eye and are easy to comprehend. In comparison, prose fiction can be - well, prosaic.

That The Tale of Genji was something of a formal anomaly to 11th century Japan is evident from the novel's depiction of that lost world, in which oral communication was dominated by poetry; and poets, especially the Chinese poet Po Chu-i, were held in high esteem. The novel's characters, most of them aristocrats, commonly used verse - well-known or impromptu - to communicate even commonplace ideas. The suitability and beauty of their verses helped to determine their social standing.

For instance: "The quiver-bearer's daughter, loath to ride away, recited the poem which says, 'Ceaseless as the interminable voices of the bell-cricket, all night till dawn my tears flow.' The mother answered, 'Upon the thickets that teem with myriad insect voices falls the dew of the Cloud Dweller's tears'...." Referring to the fleeting nature of love, a man declares women to be "glittering hailstones that melt if gathered in the hand."

That such a poetry-steeped world existed is rather hard for us modern commoners to believe, speaking as we do so directly and even clumsily -- or, like, whatever, you know? And it would be rare indeed to cite a verse by even a nominally famous poet, say Shakespeare, and expect anybody to recognize it, much less reply in kind. We do not speak in beautiful poems, but in broken propositions.

Speaking in poems is not the only striking thing about this Japan perdu. Also striking: The degree to which communication took place via secret correspondence. The law prohibiting foreigners from entering the Imperial Palace. The silhouetting "screen-of-honor" placed between a princess and her suitors. What the Japanese called the mainland - "the Land Beyond the Sea" - and the tenth month - "the Godless month." The skills expected to be learned by a woman of the court: "poetry, cursive writing, and lute-playing." And, finally, countless acts of illicit sex. But this requires us to introduce Genji, Imperial Japan's Don Juan.

Genji's Tale begins when the Emperor impregnates Kiritsubo, a concubine. She bears a son, Genji, and promptly dies. Like many literary inventions robbed of their mothers early in life - Thailand's Jan Darra, for example - Genji spends his life pursuing women, perhaps, as psychoanalysts might have us believe, in a subconscious quest for substitute maternal love. Or maybe he just liked women.

Whatever the reason, Genji's appetite for amour is gargantuan and does not always respect moral bounds. Though married to Princess Aoi, he courts Princess Asagao; has a child by the Emperor's consort Fujitsubo; is infatuated with the married Utsusemi; carries on a long-running affair with Lady Rokujo, also married; and shares one Yugao with his friend and brother-in-law To no Chujo. He even abducts and adopts a ten-year-old girl, Murasaki (no apparent relation to the author: murasaki in Japanese means 'purple', i.e. 'royal'). Once nubile, Murasaki becomes his second wife. In addition to all these erotic entanglements, Genji dallies with an old "lady-of-the-bedchamber" as well as with a taciturn princess cursed with a repellant red nose.

Genji is a busy man, indeed, and were he not so noble and revered, all of this philandering would harm his reputation. As it is, women tsk-tsk him as they secretly desire to be the next notch on his bed-post. The Emperor, meanwhile, rarely takes Genji to task. Only Kokiden, the Emperor's original consort, consistently dislikes the promiscuous prince, but only because the Emperor favored Genji's mother and Genji over Kokiden and her son, the Heir Apparent.

Once in a great while, Genji stops to wonder whether his life is out of kilter. When his lover Yugao is bewitched and subsequently dies, the author comments, "Now at least we must suppose he was convinced that such secret adventures lead only to misery." The supposition is premature, for as Genji later pines for Murasaki, he giddily explains to her nurse "that strange things happen if one's heart is set upon a thing as mine is now." Genji's heart tends to win the day over his brain; or, rather, his brain is a formidable tool for manipulating women into the service of his heart (or, as the psychoanalysts might have it, his libido.)

The author offers the following explanation of Genji's behavior, and incidentally provides a most convincing definition of romantic love. "It is generally the unexplored that attracts us," she writes. ("Us", mark - not "men" or even "people like Genji"). She continues: "Genji tended to fall most deeply in love with those who gave him the least encouragement. The ideal condition for the continuance of his affection was that the beloved, much occupied elsewhere, should grant him no more than an occasional favour." In other words, love is a curious game in which winning is losing - in which pursuit, not capture, is all.

An idea common to world literature is that the present is a period of decline from some Golden Age. Usually this idea is held by the aged, infirm, or the chronically unhappy, which may explain why it recurs no matter whether the present is the 21st century or the 11th or the 1st. So when demagogues bemoan "moral decline" or seek a return to "family values", they only betray their innocence of history. They don't know, for example, that an old priest in The Tale of Genji thinks that his Japan has become "degenerate" and that her days are numbered. Or that Genji itself is seen as a record of moral disarray. It would be difficult, in short, to locate a Golden Age anywhere in history - it belongs, rather, in the realm of myth, alongside the false supposition that the novel is an invention of dead white European males.

Increasingly, the term "the West" departs from its dubious dictionary definition - "Europe and the Western Hemisphere" - and refers instead to a bloc of nations embracing some form of democratic government and capitalistic development. It is becoming more common to say, for example, that Japan is Western. This in turn places The Tale of Genji uncomfortably within the Western canon. This evolution of "the West" is to be regretted from the standpoint of semantic clarity, but if it means that Genji is more often to be read as a literary classic in the West alongside, say, Don Quixote, the evolution is to be encouraged. Not in the name of Western triumphalism, but in the name of our common humanity, including our irrepressible (though diminished) tendency to make love, poetry, and love poetry.