Making for the Hills 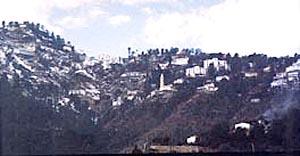 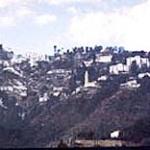 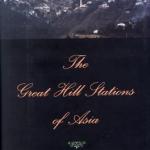 I remember exclaiming with awe when I woke up in Simla (or Shimla, as it is often spelled and pronounced) and stepped out of my room to view the landscape, which I had been unable to see on the previous night's steep and rather frightening ascent (if I recall correctly, the headlights of the bus had failed at one point.) Simla, as well as the hill stations of Dalhousie and to a lesser extent Dharamsala, remain among the most beautiful places I have ever visited. But after reading the surprisingly interesting and informative book The Great Hill Stations of Asia, by New York Times journalist Barbara Crossette, I feel that the hill stations of India may be surpassed by others, in Burma, Vietnam, Indonesia, the Philippines, Sri Lanka, and Pakistan - that is, virtually every Asian nation that has been colonized.

The hill stations were created mainly to provide the colonists a place with a temperate climate, free of the diseases that so often plagued them in the tropics. According to Crosette these included "sunstroke, dysentery, cholera, malaria, and a host of other unnamed deadly fevers as well as little-examined, vague indispositions that in hindsight would probably be diagnosed as clinical systems of depression." Some of the stations also served as summer capitals. For example, the Government of India was moved, more or less down to the last teacup, to Simla when the heat of Calcutta became unbearable. Now most hill stations have become big towns or popular tourist destinations, with all the attendant commercialization and environmental degradation. Crossette uses the hill stations as lenses through which to view the region's cultures and history, and the result is a richly rewarding account of an Asia in which Crossette has worked for several, apparently enjoyable years. And her association with the Times gives her an insider's perspective: among the influential Asians she's interviewed is the man who made Singapore what it is today, Lee Kuan Yew. But her view of the hill stations is not a rarefied one, so to speak. Commonly she forgoes convenience in her travel arrangements in order to get the real deal.

As Crossette points out, the colonial empires built hill stations outside of Asia as well, but only those in Asia possess such mystique. And they weren't all European; the Americans also built one during their short-lived administration of the Philippines, which was annexed by the United States in 1898 and became independent on the whimsically chosen date of July 4, 1946.

Nearly half of the book concerns India, wonderful India, horrible India. (Or Pakistan, but of course when the hill stations were built the two countries were one and the same.) For India was probably the most prized colonial possession of Asia, the "Jewel" of the British Empire. Crossette mentions two more hill stations I've happened to visit - Mahabaleshwar and Matheran, both just outside of Bombay. I shuddered a little when Crossette referred to New Delhi as "Asia's most magnificent capital", when it is also one of the most overcrowded, polluted, and inconsistent. In describing Calcutta she is more unsparing: in it you may find "a black squalor that assaulted all the senses". Readers of V.S. Naipaul will be reminded of his description of India as an "assault on the senses", and Crossette initially shares his view that Calcutta is a dying city, one that "will never make it."

On India, Crossette is candid. She reminds us that Dal Lake in Kashmir is ecologically dead because of pollution (in turn because of obscene overpopulation.) The Indians are nearly as good at destroying life as they are at creating it: Crossette relates the appalling statistics for traffic fatalities in the country, and recalls an Indian official speaking of a certain famine as "unsuccessful" because not enough people (i.e. mouths to feed) had died. She finds the mot juste for the condition of many Indian toilets - "filthy beyond description", which is perhaps to say that no mot is juste. She notes that South Asians have a tendency to mistreat property until it becomes ugly or unusable; that, as one of her sources put it, "Indians love noise"; and that, as another puts it, India "never gives you what you expect."

But it's not all bad. Crossette has kind words for the intellectual climate of Calcutta; the high literacy rates and egalitarianism of Communist Kerala (due in part, she says, to the influence of Christianity); and the hospitality of South Asians generally.

Like a lot of literature about former Asian colonies, Crossette's book dwells on the question whether they are better off since independence. She meets a Filipino who wishes the Americans had never left; a Pakistani woman named Begum Nargis who speaks very highly of the British respect for education; and countless others who feel that the hill stations have deteriorated since the end of colonial rule. It's easy to forget just how much the colonies were shaped, often literally, by the experience. At the hill station of Murree in Pakistan, Begum Nargis recounts the British contributions to infrastructure: "Overnight they built a beautiful road that still exists. All the roads in Murree that are still in use were made by the British. About 80 percent of the houses that were made there were made by the British [emphasis added]."

In some cases the hill stations are being directly threatened. Kodaikanal in south India, for example, where there is an international school of some renown, has been attacked by Indians who resent the presence there of a Christian community, much of which is American. The hill station of Dalat in Vietnam largely escaped the ravages of over three decades of war; others, like Bokor in Cambodia, were not so lucky. Bokor, writes Crossette, is "in ruins".

Because of their physical isolation, the hill stations tended to have a reputation for dissipation. On one of the several occasions that Crossette quotes Kipling, he reports: "In India, where life goes quicker than at Home, things are more obviously tangled and therefore more pitiful to look at." Sometimes the taste for needless drama arose simply out of boredom; Crossette quotes one colonist as saying that colonial life was diminished by "the petty quarreling that went on when folks did not have enough to do," which was apparently much of the time. And because alcohol is perhaps the best artificial cure for boredom, many a colonial drank himself to death, part of the reason why their life expectancy was comparable to that of their miserable subjects.

Crossette rejects the notion that "Asia" is a stable category, and the hill stations are but one respect in which the nations of Asia have been hybridized by their contact with the West. The woes of Sri Lanka, for example, have in part been caused by the importation of Tamil laborers by the British. For those who can afford it, the most popular whisky (if not alcoholic beverage) in Asia is, as Crossette rightly observes, probably Johnnie Walker Black Label, not, as one might expect, some distillation of rice. Unfortunately, the hybridization has been accompanied by homogenization, but Asians themselves must shoulder part of the blame: "Experienced tourists," writes Crossette, "learn that beach resorts may seem largely interchangeable and Asian cities all begin to look alike. But the hill stations...." Ah, the hill stations. Only time will tell whether they can withstand the forces of uniformity. But Crossette's book, in raising awareness of these treasures in the clouds, is itself a cause for hope.

Asian Films Play "I've Got a Secret" at San Jose'sCi...