So Long and Thanks for All the Trains 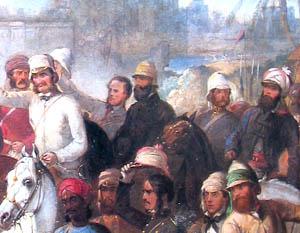 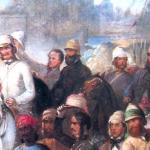 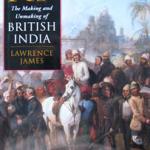 As a man named Vijay led me down a typically congested Bombay street, he pointed to the buildings around us and boasted that they were all British. But contained within this boast was shame at Indians and at himself. The British built Churchgate, Victoria Terminus, the High Court. They built Bombay's indispensable trains. They provided a model for Bombay's schools. Teachers used quaint English expressions like "mugging up", "marks", and "exam papers"; and everybody, I mean everybody, drank tea.

The residual Raj was everywhere -- but the British? Vanished. Gone. Except, or so it seemed, one. A gigantic Englishwoman was charged with overseeing my school, and she dealt with the Indians beneath her (quite literally and emphatically beneath her) with the same stern detachment for which the Raj was admired and abhorred.

As a lad I was fascinated by Richard Attenborough's hagiographic film Gandhi. In the fifth grade I was already extolling the virtues of passive resistance, and I remember passively not resisting the malicious kicks of some backwater thug. I was a 10-year-old satyagrahi. And like Gandhi I would prevail. The thug, damn him, would fail out of school. So my interest in the Raj runs deep. But most of what I know about it has come from Indian nationalists like Gandhi and Nehru or British anti-imperialists like Forster and Orwell. Rare is the imperial history that does not double as political propaganda. Thus are we indebted to Lawrence James' Raj: The Making of British India, a truly formidable (and at over 600 pages, rather forbidding) cinder block of a book.

What was it, James asks, that permitted the few hundred thousand representatives of a distant and tiny island to dominate a gargantuan subcontinent populated by some 300 million people? In part, he suggests, it was the willingness of Indians to benefit from the oppression of their countrymen. That they did so under British supervision does not absolve them, any more than Hitler absolves the Third Reich. It only shows how deft, if also self-seeking, this supervision was.

Telling from the titles of James' other works, he is foremost a military historian, delighting in pitched battles and Kiplingesque derring-do. One of these titles is Warrior Race: A History of the British at War. For me the title conjures up absurd images of Michael Palin or Neville Chamberlain storming a citadel while wielding mace and shield. Henry Adams preferred to call the British a "besotted race." Too bad he did not write A History of Britain in Its Cups. Given James' military sympathies, much of Raj is about wars and insurrections. Economic considerations form a background. So James offers little to those who contend that the Raj was just a well-organized and well-disguised system of burglary. "Net transfer of capital," the buzzphrase of anti-globalizers, is neither uttered nor contemplated.

"On the whole," proposes the Briton James, Britain improved the subcontinent and vice versa. This win-win assessment is touchingly optimistic, but it contradicts Nehru's belief that the Raj actually prevented India from modernizing on its own terms. There is no end to this particular dispute, but at least we know where James stands.

According to him, the approximate literacy rate in India was 8% in 1941, 21% in 1961, and 52% in 1991: i.e., literacy skyrocketed only after independence. James concludes that this progress "could not have been achieved without foundations laid down during the Raj." Hail Britannia! But mightn't an independent India have laid its own foundations (as independent Siam did during the same period)? And what were those "foundations" doing for 200 years except moldering? Evidently they were doing very little, and for good reason: educated people make bad slaves.

Only recently has the globe been carved up into nations with static and well-defined borders, and the British did most of the carving. For the foreseeable future we must tolerate their imperfect result. Civil wars create new nations; treaties fuse the old; and in the meantime great energy is wasted, people die.

As an example of premature nationhood, India is hard to beat. For eons "India" referred to the amorphous land east of the Indus River. Prior to 1947, it was a number of confederacies and princely states with little sense of being part of a whole. Hindus and Muslims lived side-by-side. But they did not live in perfect harmony, as Attenborough's Gandhi would have us believe.

When the British ceded control, it was understood that India would be a democracy. But a democracy is only a tyranny of the majority, and in India the majority was (and is) Hindu. Thus was born the idea of Pakistan, a place where Muslims could worship Allah and swine could wallow in the mud. India's last Viceroy Mountbatten made Pakistan a reality.

At best Partition represented a rollback of ancient Moghul conquests. But the effects were catastrophic. As Christopher Hitchens pointed out in "Divide and Misrule" (The Nation, February 4, 2002), partition almost always leads "either to another partition or to another war or both." The partition of the subcontinent led to three wars between India and Pakistan, the war of Bangladeshi independence, and the ongoing bloodshed over Kashmir. The lesson should be plain: ethnic and linguistic ties are stronger than the ties imposed by an alien faith.

According to James, Mountbatten expected and rather relished the thought that "Pakistan would wither, and at some future date, be driven by economic necessity to return to the greater India." Pakistan has indeed withered, but economic necessity has driven it not to India, but to Mecca. Or, barring that, the United States, which favored Pakistan over its Fabian cousin to the south. Most recently realpolitik has driven the US to force Pakistan to attack the very Islamic extremists that Pakistan had long encouraged, and there is speculation that this partnership will lead to yet another, in this case civil, war.

India's fragmentation has been less dramatic. Some Indians predict that India will one day divide into Hindiphobic south and Hindiphonic north. And despite the incomprehensible exoduses after Partition - some 11.3 million people, according to James - India still contains a massive Muslim population forever at odds with the Hindu Centre.

Had Partition never occurred, South Asia would still witness pointless sectarian violence. But at least this violence might have remained small-scale. Instead Partition caused the most virulent Muslims to repair to Pakistan and institute a perpetual grudge against the country they left behind. Hindus and Muslims have been burning each other's houses down for centuries. But thanks to Partition we are faced with the grim possibility of Pakistan and India incinerating each other's countries with nuclear weapons. The Pentagon estimates this possibility to be about 1 in 2.

The suppurating wound in the side of the subcontinent is still Kashmir, a Muslim-majority state whose maharaja opted to join Hindu-majority India. According to James, Pakistan picked this fight hoping to pre-empt the maharaja's decision. But the Raj did not help matters. Princely states like Kashmir would have preferred to keep their thrones under British protection. But this hardly forgives Pakistan's attempts to yoke all Indian Muslims under a crass and atavistic despotism in Islamabad. Kashmiris are Kashmiris first, Muslims second.

Raj is a vindication of the idea that without religions, and especially the proselytizing religions Christianity and Islam, the world would be dramatically improved. Of course without religion we would have no St. Matthew Passion, no Sistine Chapel, no Divine Comedy. But the balance of religion is decidedly in the red, so to speak.

Raj drowns in sectarian blood. The Indian mutiny of 1857 was caused by Indian suspicions that the British had greased rifle cartridges with cow and pig fat, as part of a conspiracy to convert Indians to Christianity. Punishments for mutineers included Muslims being "forced to swallow pork and Hindus beef." Englishmen justified the Raj using loony notions of Providence and Divine Justice, and "the ultimate goal of all programmes for spreading Western education throughout India was the conversion of the Hindus." (No wonder they didn't learn how to read: they would have been reading Bibles!) Both Hindus and Muslims resisted modern medicine and defended pedophilia on religious grounds: evidently diddling a 9-year-old is a great consolation when you are dying of bubonic plague. And during Partition between 500,000 and 800,000 Muslims died, all in the name of the faith. English fanaticism was more a matter of nationalism than religiosity, but it was nonetheless a major cause of Indian unrest. And no wonder, with British soldiers singing this cheery ditty:

"In Malaya," claimed Indian nationalist Shah Nawaz, "swimming pools had notices which banned 'Indians and dogs.'" And one must not forget the lexicon of boorish racial slurs: niggers, coolies, black-bellied bastards, etc. If nothing else, the English mastered profanity.

Empires express ridiculous outrage whenever its subjects attempt to reclaim their sovereignty by force, the preferred means of the empire. The rather feeble bombing of an American warship - the kind prone to lobbing cruise missiles at defenseless people -- is not seen as retaliation, but as a barbaric crime. After the infamous General Dyer was sacked for ordering the Tiananmen-style massacre of 379 Indians at Amritsar in 1919, "an American lady who once visited India wrote, 'I fear for the British women there now that Dyer has been dismissed.'" No fear for the Indian women before, needless to say. Nor any thought that the British women ought to go home. But this strange moral calculus, in which one of "us" equals a hundred or more of "them", and in which "we" have the right to barge into anybody's living room and expect sterling treatment, remains very much with us.

On a lighter note, James' history overflows with esoteric and thought-provoking facts. A sampling: The British invaded Tibet of all places in 1903-1904; the region near the Khyber Pass was known as yaghestan, the land of rebellion; common English punishments included being blown from a cannon and "being tied to the mouth of a cannon and blown apart"; Britons did not beat people: they "refreshed" them; after the Mutiny, that bleeding-heart liberal Charles Dickens endorsed the wholesale extermination of the Hindus, i.e. genocide; Indians were sickened by the plight of the urban poor in England, and one Indian wrote a scathing attack on the United States called Uncle Sham; prior to 1916, cholera, dysentery, diarrhea were thought to be transmitted by flies; Nehru and Lady Mountbatten wrote love letters to each other; and, finally, the great orator and sot Winston Churchill was occasionally more sot than not, as these remarks of his suggest:

Evidently this "great contribution" did not include brevity or cogency.

Details like this alone make Raj a gripping and worthwhile read. And whatever one may think of James' claim that the Raj's influence was positive, one cannot help but admire his refusal to presume that the influence was wholly negative. He suggests that the idea of self-government has become "inviolate," even when self-government is evil or cruel. He deplores the "tyranny, chaos, and internecine war" into which so many former British colonies have plunged. But these things were there to begin with, and it's not really his or our place to wish otherwise. In the long run, alas, people get the governments they deserve.